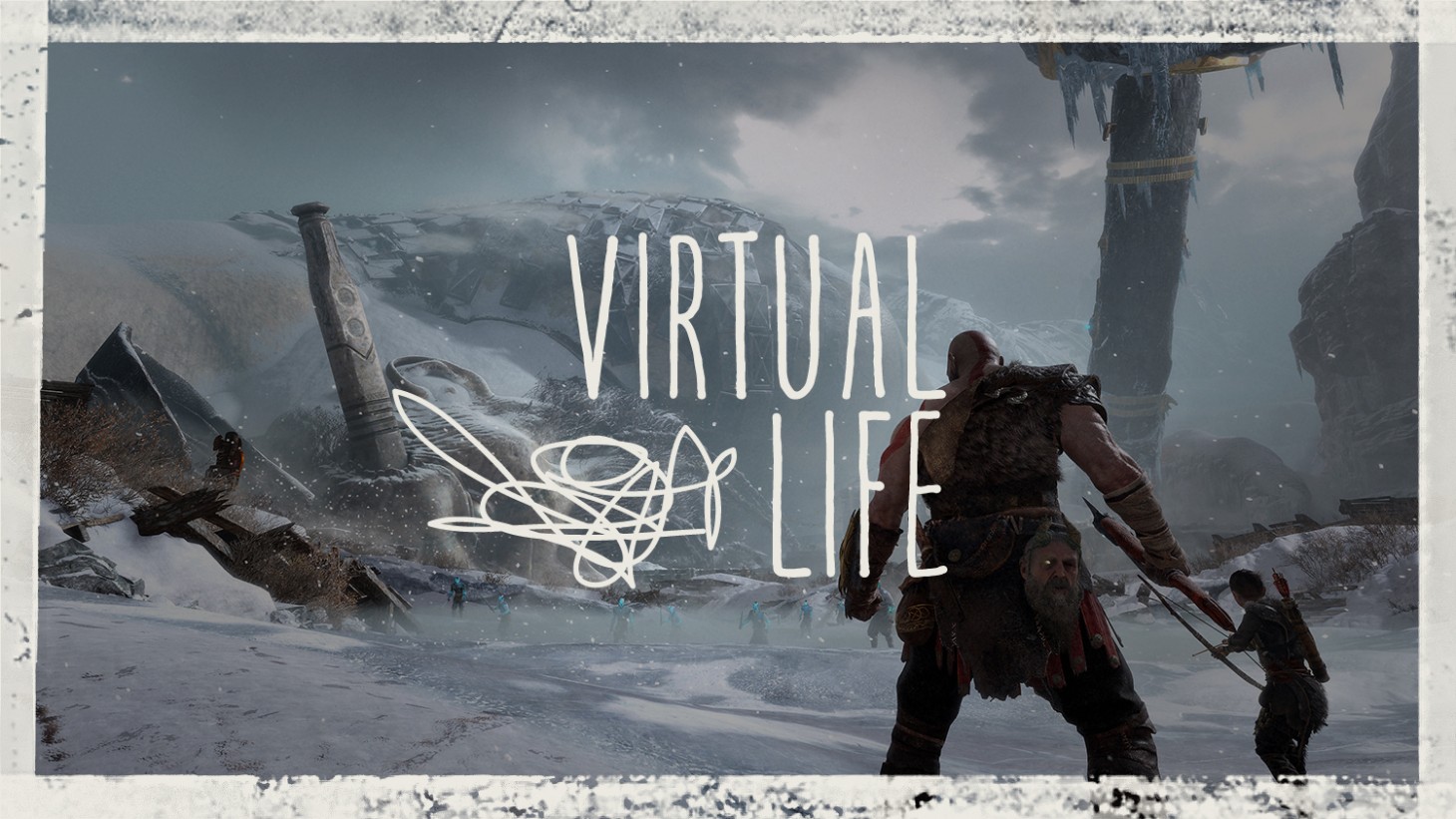 2018’s Best Games Were About Change

2018 has been an interesting year for me. I ditched most of my social media platforms, embraced sobriety, became a vegetarian, and in general have tried to focus on finding validation through creation and self-acceptance. As such, the process has made it difficult to see the world as anything other than a series of changing states. However, in spite of that inclination, it's easy to see that some video games have been about change this year. I could spend a fair amount of time talking about what Sony pulling out of E3 means for one of gaming’s oldest reveal-laden extravaganzas, or grapple with how the boxed product of my youth is becoming less of a sure thing as games as services continue the rise.

Instead of industry trends, however, I’ve always endeavored to make The Virtual Life about the games themselves and what they say about what it is to be human. So, for this year’s last column, I’m gonna talk about God of War and Red Dead Redemption II one more time — specifically how they tackle the concept of change to great effect.  Be warned, heavy endgame spoilers for both titles ahead.

Now obviously both games exist as companion pieces to games that have come before. Red Dead Redemption II, in spite of its title, is a prequel while God of War is a long-awaited sequel. The appeal of sequels and prequels are rooted in change. Think about Star Wars: The Force Awakens. So much of the hype for that film was that people were excited to see how that universe had changed, how the heroes had shifted as characters over the years. Story continuations are only good if they acknowledge that people change. They live, they die, and in between they make decisions big and small about who they’re going to be.

God of War opens with Kratos already having made a choice about who he is. After the bloody chaos of the seven God Of War games that preceded this one, our demigod has accepted a life as hermit parading to be mortal in Midgard. He fell in love with a woman named Faye and had a son. He does not seek out violence and is trying to carve out a life of simple living in the frozen countryside away from the bickering of this realm’s gods. 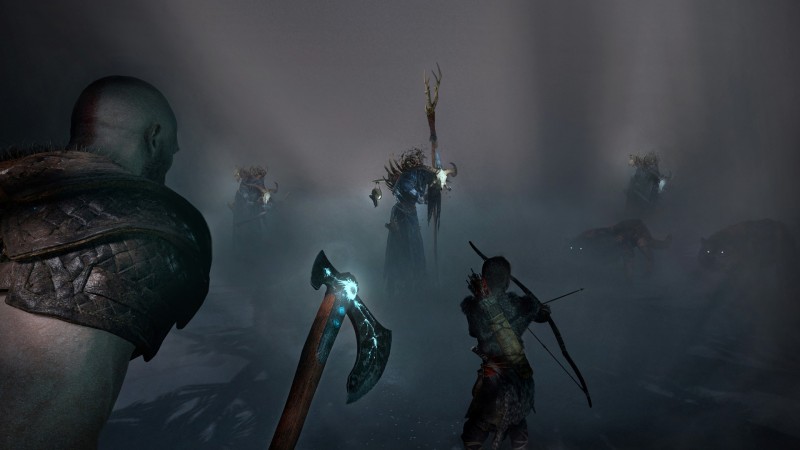 The fact that so much of Kratos’ actual change takes place off-screen and in the years between God Of War 3 and this entry makes his presentation in the opening hours compelling. The quiet, skulking man has traces of the angry demigod we know, such as when he growls “I told you to go away. You would not listen,” after punching the mysterious stranger. It’s a great little scene where Kratos’ rage has layers: he’s angry because he was punched in the face, because he was baited into a fight, and because his default state is being angry all the time. Watching him lose the ounce of control he's mastered over the years in that one scene does far more efficient storytelling than four novels dedicated to Kratos’ gradual change ever could.

The journey itself in God of War is also about change, specifically the change that happens in our lives when someone we love leaves us. Both Kratos and his son Atreus are essentially both adrift in their own ways when Faye passes. Kratos does not know how to be a father and Atreus has lost his primary teacher. While the latest entry in God Of War has everything the series has become famous for such as jaw-dropping boss fights and satisfying combat, the truly special, magical part of the game is watching the father and son actually develop something closer to a real relationship than the estrangement between them at the beginning.

It’s not an immediate transformation or one that packs up tidily, with Kratos and Atreus hardly being overjoyed about one another’s company at the end of the game. However, that’s what makes it so great. Seeing Kratos slowly accept his son along the journey enough to reveal the truth of his haunted past is immensely rewarding, especially when it culminates with this fantastic exchange:

Kratos: Boy! Listen close. I'm from a land called Sparta. I made a deal with a god that cost me my soul. I killed many who were deserving...and many who were not.

Atreus: Is this how it always ends? Sons killing their mothers? Their fathers?

Kratos: No. We will be the gods we choose to be. Not those who have been. Who I was....is not who you'll be. We must be better.

It’s here that we get a true glimpse of who the new Kratos actually is, beneath all the blood and anger: a man who wants his son to escape what he was. It’s a moment where one of gaming’s biggest anti-heroes and emotional shut-ins performs a selfless act by letting his son know that the future can be better for him and that everyone should strive to be better people. With that flourish, God Of War transforms from a nihilistic series into one about hard-won hope. 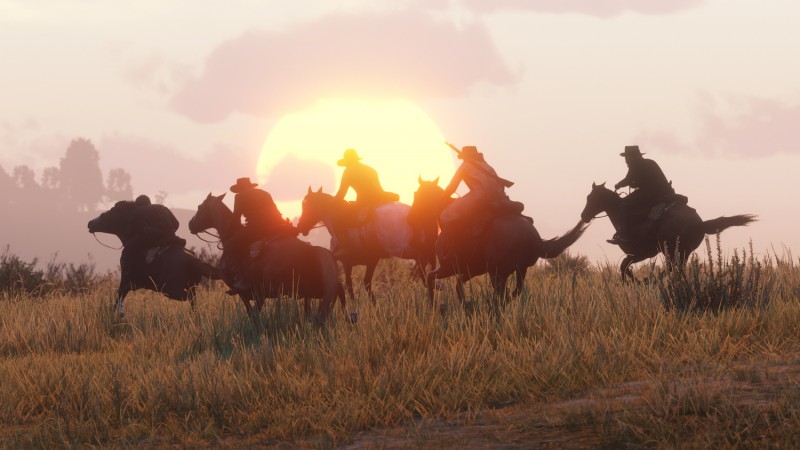 If the latest God Of War is about people rising from the ruins of their former selves, then Red Dead Redemption II is about how people come to ruin. As a prequel, Red Dead Redemption II doesn’t tell us anything new about the eventual fates of the Marston family: we already know how it all ends. John and Abigail die, and Jack Marston becomes the gunslinger his father never wanted him to be. However, Red Dead Redemption II shows the beginning of the story that eventually leads to that place and in the process shows the tragic, destructive change of entropy as it wears down on the Dutch Van Der Linde gang.

Throughout the game’s lengthy story campaign, we watch as the gang is whittled down to nothing by a combination of elements: Pinkertons, poor decisions, a leader slowly losing his mind, in-group fighting. There is no single enemy in the game, no big bad to pursue. The Van Der Linde gang is done for simply because it can’t compete with the ravages of modern times and paranoia. There’s an apparent bright spot at the end where protagonist Arthur Morgan’s sacrifice buys John and Abigail a chance to start a new life. This leads to an epilogue filled with heart-warming moments, like a musical montage where John builds Beecher’s Hope in order to win Abigail back as well as a scene where he proposes to her. However, all of these scenes are undercut by what we already know: Mere months into the future, John Marston will step outside of a farmhouse and die in a hail of gunfire so his family may live.

This bit of knowledge is particularly painful in a sequence at the end of the epilogue where John makes up his mind to pursue Micah, who does his fair share in unraveling the gang. John has spent the entirety of the epilogue trying to prove to Abigail and himself that he can be a rancher, a man who can make an honest living. In the end, he can’t escape who he is, and goes to grab his guns. He and Abiail’s exchange as he prepares to head out and do the deed is essentially acting out the theme of the whole game: people very rarely change.

Abigail: I’m begging you. No. You’d risk all of this? For what? For Micah?

John: All of this wouldn’t exist if it wasn’t for Arthur, Sadie, and all the folks as fell. If I let him go, this place ain’t no more real than one of Jack’s dragons.

Abigail lives in a modern world of practicality, where people should make the smart choices so they can survive and take care of the people around him. John can’t escape that old world sense of honor, where violence must be paid with violence and, as he says in the original Red Dead Redemption “nothing gets forgiven.” Ultimately it’s John’s inability to change and let go of the past that leads the Pinkertons right to the Marstons’ doorsteps and brings about doom. It’s an ending that reinforces the satisfying yet bleak conclusion of the first game after Jack guns down the man who killed his father. Can anyone resist the opportunity for vengeance when it arises, even if it means their downfall? Red Dead Redemption has an answer to that question but it’s probably one you don’t like.

I love that in a single year, two massive, high-budget titles with quality writing and production values can take a single theme and run in opposite directions with it. Here's hoping we see many more years of fantastic interactive stories with radically different and compelling takes on similar themes.

For more on Red Dead Redemption II, you can read my defense of the game's pacing here or if you crave all things Kratos, here are some words about whether or not he can be redeemed.