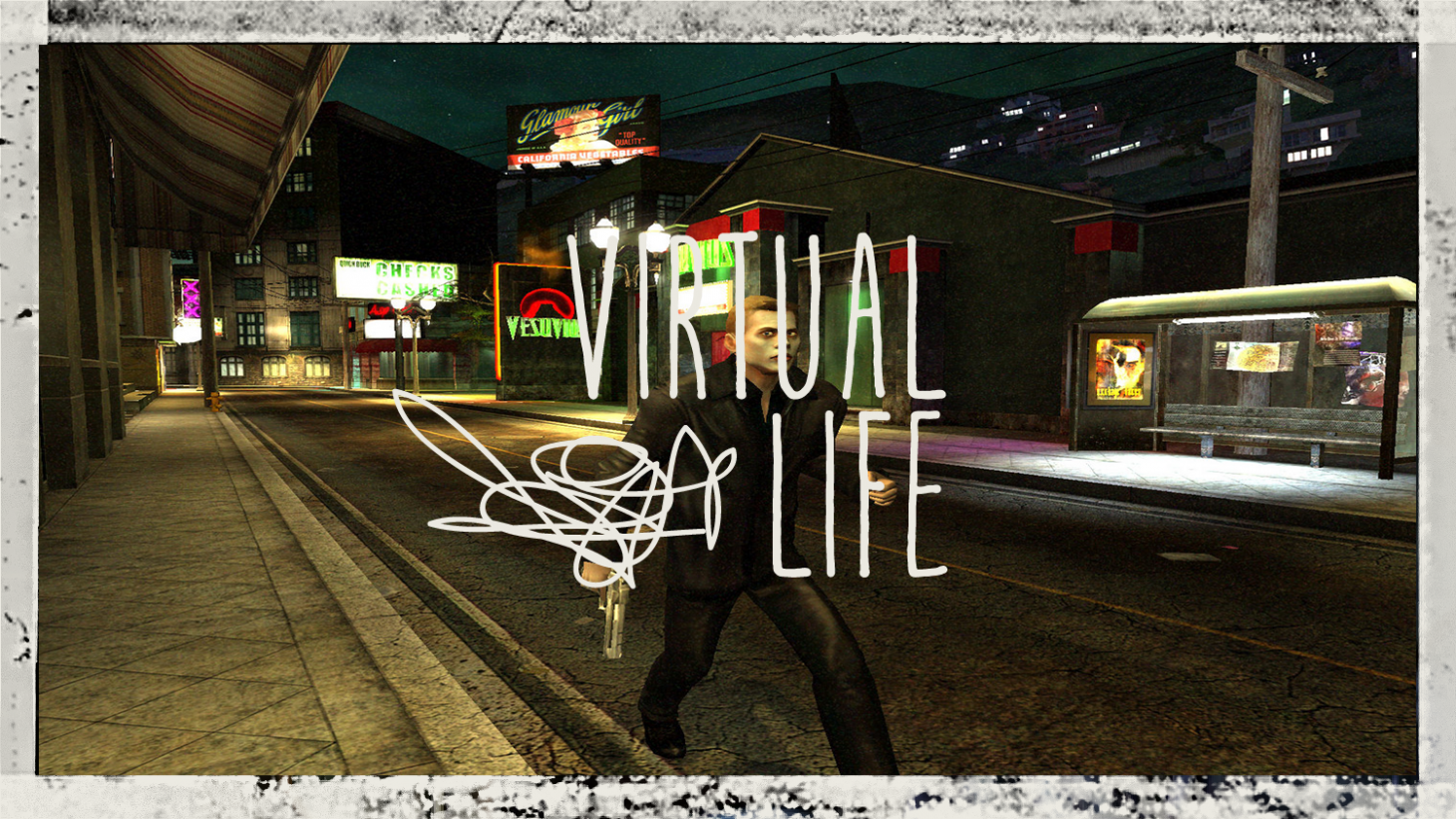 Vampire: The Masquerade – Bloodlines Remains One Of Gaming's Best Worlds

I came to Bloodlines when I was 14. The big draw for the game back then was that it was the first non-Valve title to use the Source engine, the same tech that was powering Half-Life 2. As I, and maybe the couple of thousand other people who played the game soon found out, the engine selling point was a bit overplayed. Bloodlines was ugly for its time and even worse, it launched with a bundle of game-breaking bugs and performance issues. It was a ragged thing, bordering on unplayable. I’d show the game off to friends after school and they’d raise their eyebrows, confused why I was wasting time with something so unspectacular when Halo 2 and Fable were right there.

The answer is that there is a small piece of Bloodlines that is pure magic. I used to think my love for Troika Games’ last title was nostalgia centered on finding something strange and off the beaten path of major releases, but as the years have gone by, I’ve come to realize that Bloodlines does something that few games manage to do: create an alluring world right out of the gate.

For those who haven’t played, here’s the setup: you’re some nobody in modern day L.A. whose date has just bitten them and turned them into a vampire. Surprise! To make matters worse, the vampires at the top of the food chain, the aristocratical Camarilla, execute your sire and would-be instructor for turning you into a vampire without permission. So, alone, stranded, and abducted against your will into a new world, you now have to educate yourself about vampire society so you can survive it. And that’s essentially the entire game. Yeah, there's a lengthy storyline about a cursed tomb and blah blah blah, but the real draw here is navigating the chaos of vampire infighting and defining yourself in that world. Just who are you? Do you abide by the rules or break them whenever you want? 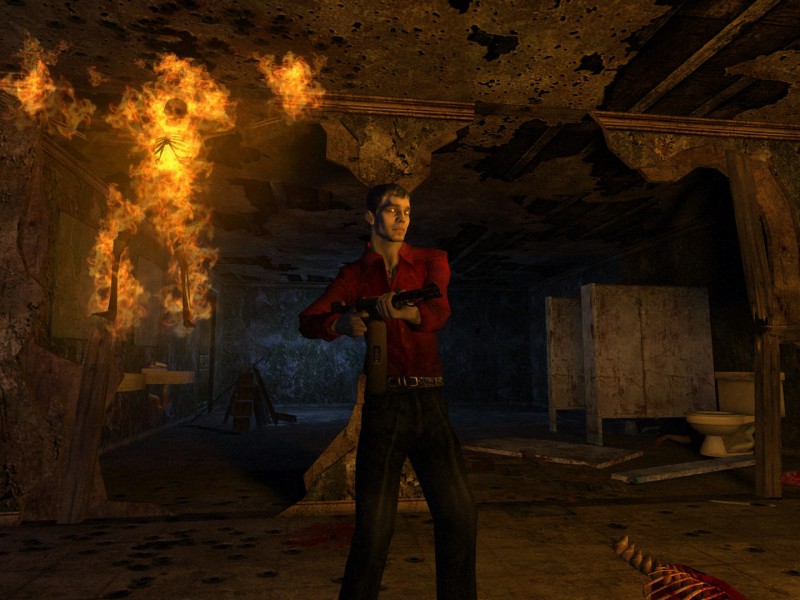 All games, to one degree are another, are about rules. Here’s how you win the game, here are the boundaries you cannot go past in this open world, here are stat bonuses that don’t stack on one another. The reason that Bloodlines' opening works in making you part of its world is because of its direct approach to explaining the rules of that world. As Bloodlines teaches you its gameplay rules – like how not feeding on blood for a certain amount of time will cause your character to descend into a frenzy where they’ll charge NPCs on the street to feed on them – it’s also teaching the rules of the world.

Most modern games, especially those of the open-world variety, take a long time to teach you the rules of their universe. Think Skyrim. It takes quite a while and adventuring before you learn all about the feuding factions and royal spats. Hours upon hours. Same for The Witcher III, Assassin’s Creed Origins, and so on. This is not necessarily a bad thing, especially in the case of those games. However, it’s shocking to me just how quickly I became invested in the world of Bloodlines during my last playthrough, the first time I had played the game in over a decade.

Think of Bloodlines as a mixture of Harry Potter’s world of wizardry but with all the seedy underbellyness of the mysterious assassin society in John Wick. The so-called Masquerade of this world is the wall between humans and vampires. Vampires must act as humans in order to blend in. If any vampire does something that reveals their vampiric nature, like using their powers in front of a human or feeding on someone, that’s a Masquerade violation. Three Masquerade violations results in the Camarilla hunting the violator in question down and executing them for the good of vampires everywhere. 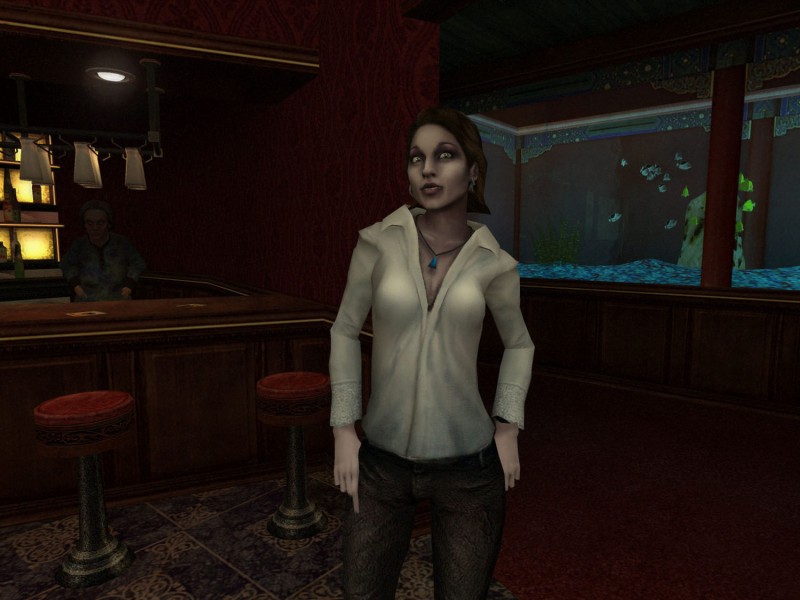 However, there are vampires in the world of Bloodlines that despise The Masquerade and think that they should rule the world and use their powers whenever they want. Forcing the player to abide by The Masquerade helps draw you into the fiction of Bloodlines because if you’re keen on using your powers, you’re going to feel that collar around your neck, the aggravation that you have to bow to an authority. On the flip side, you might come to understand the need for those rules as you head off the beaten path from the story and discover just how dark and demented the denizens, vampire and otherwise, who inhabit Bloodlines’ universe are. A personal favorite? The demented Stanley Gimble, a prosthetist who keeps his patients locked up in a homemade prison to harvest their limbs…until you come along to put him out of business.

You do have characters in the main storyline, like the outsider Beckett or the leader of the local anarchist group Nines, who take a liking to you and teach you about the families and different kinds of vampires, like how Malkavian vampires are literally insane and hear voices in their head. However, for the most part, your education is informed by how you explore the city and what (and who) to get tangled up in. Masquerade excels at leaving bread crumbs that lead you to interesting places. For example, a visit to nearby blood clinic might end with you finding someone bleeding to death in one of the patient rooms. Letting them feed on you will result in that person miraculously recovering from their fatal wounds and becoming a blood-bound servant to you, capable of fetching you blood and being a live-in servant. It also curses them to a life as a slave. Oops. 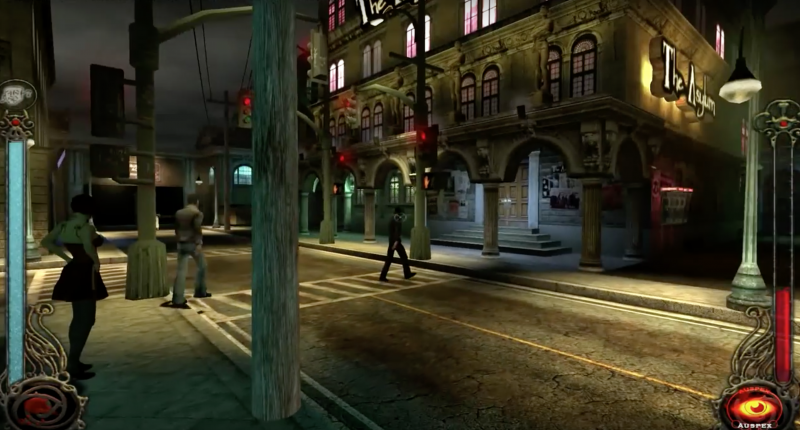 It doesn’t hurt that Bloodlines’ take on L.A. is always engaging to explore. Yes, the game is ugly, especially when it comes to texture quality and character models. However, the layout of each section of the city – presented as a series of hubs – is filled with a ridiculous amount hidden places to find. The setting of the modern city infused with the gothic nature of these dungeons, some of them filled with genuinely terrifying and grotesque sights, helps make this world a strange, fascinating place, a collision of stylish crime drama and fantastical. Beneath this version of glitzy, star-struck Los Angeles, the monsters run amok, and it’s an unsettling amount of fun being one of them.

The final, biggest piece of why Bloodlines works in setting its tone and engrossing you into its world is how it handles classes. At the beginning you select your your vampire clan, which gives you certain stat boosts and powers depending on the clan. However, the clan system in Vampires goes beyond typical RPG fare by creating and breaking certain rules depending on the kind of vampire you’ve selected; your choice feel like it carries weight. Take the aforementioned Malkavian vampires. If you choose to play as one of them, you’ll hear voices throughout the game whispering to you and even have some unique dialogue encounters, like this one with a stop sign:

Choosing to be a Nosferatu means that you exceed in strength and battle but that you’re so hideously deformed you can’t be around humans, meaning that you’ll spend the majority of the game in tunnels or sewers, finding ways to circumnavigate the streets of LA. On the flip side, choose the Toreador clan and you’ll feel at home with humans, capable of bending them to your will through persuasion and charisma. The kind of care taken with these classes is more than just a replay value thing: it also thematically enforces the idea that you’re a scared newcomer in this world to the point that you don’t even understand how your body works or the social constructs tied to your race.

I think ultimately that's what makes Bloodlines so fascinating to me is that it's a game about getting lost in a culture. It's a grimy, deathy culture that feels a little too much like you've walked inside a Hot Topic circa 2005 at times, sure, but the way the game instructs you in the social niceties of that world and gives you the power to push against them (if you so choose) is fascinating.

Years after its release, Vampire Bloodline continues to prove its specialness through its devoted fan community, which has grown considerably since 2004. They have continued to support the game, fixing nearly every single bug that was in the original release, as well as improving the game visually and restoring lost content. And it’s not because Bloodlines is a quirky, charming game. It’s because there are few worlds, past or present, in games that are as worth visiting.