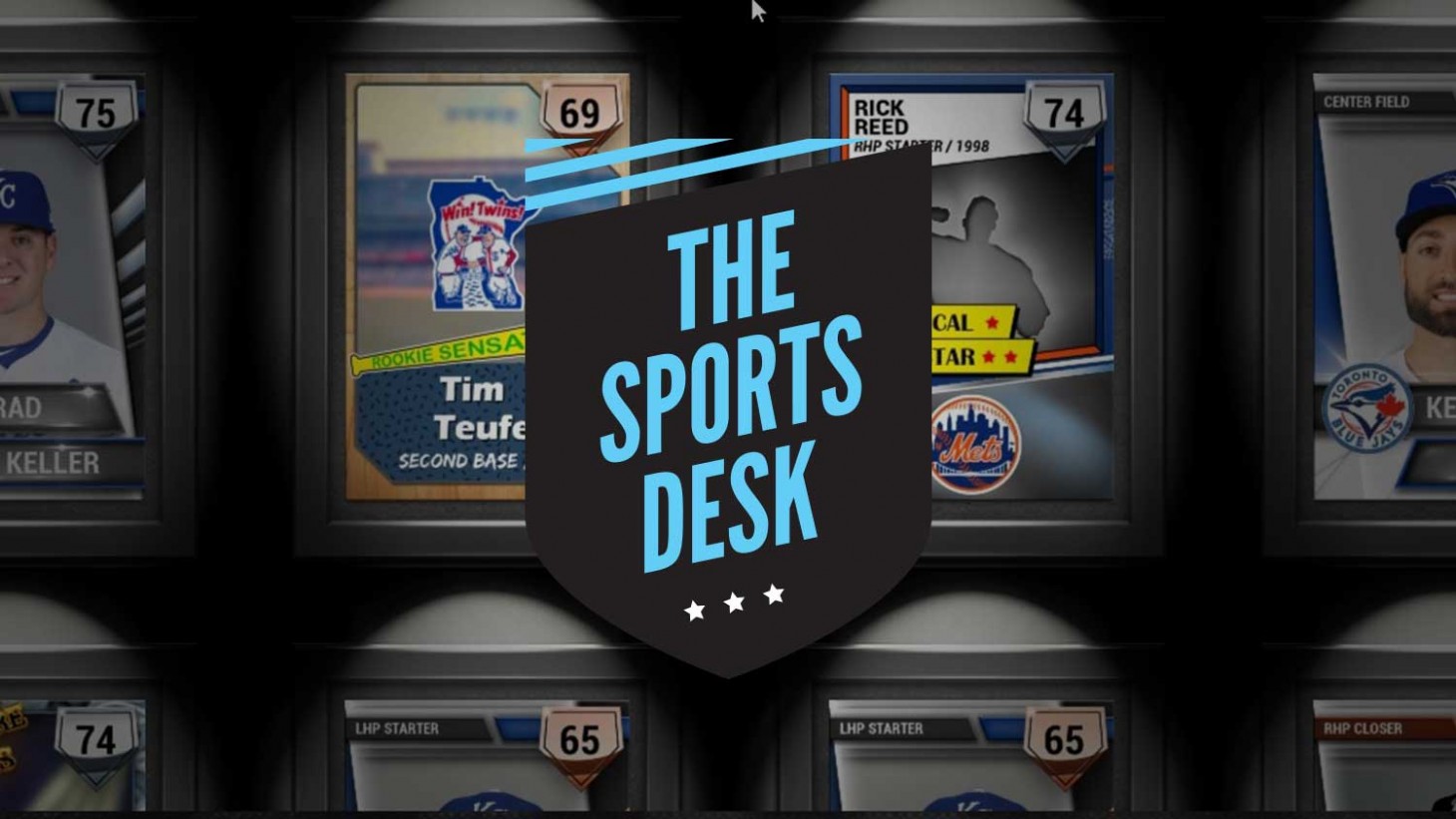 Last year, Out of the Park Baseball added a free fantasy-based card mode called Perfect Team to its simulation offerings, and not only has the mode taken off, but it's just the start. Out of the Park Developments has added collection missions, and tournaments are planned before the end of the year.

I talked to OTTP community manager Kris Jardine and chief marketing officer Rich Grisham about how fans are finding ways to win in the mode, and what's next for the mode and the company.

Out of the Park Baseball 20

Where any changes made going from Perfect Team in OOTP 19 to 20?
Kris Jardine: We took a lot of the feedback that we got in that initial Perfect Team 19 in terms of player ratings and in-game strategies, and we were able to make some improvements in that regard. So we were able to tinker the way that players were rated, especially in terms of older historical players and trying to use their defensive ratings in a way that more reflected how the game was played at that time. And just some general changes to the way that the A.I. operates. And we introduced the opener/follower scenario that has kind of taken the baseball world by storm.

Have you seen any particular strategy or lineup that you were amused by or thought, “That’s a pretty novel strategy – I hadn’t thought of that”?
Jardine: I'm always impressed by teams built completely on speed. I've seen teams that they will amass 600-700 stolen bases over the course of a 162-game season and make it work. Me, when I think baseball I think, “Okay, I want someone who hits for a good average, who can hit with some pop, plays acceptable defense…” Then you see these guys like, “No, I'm going to try to Billy Hamilton, Rickey Henderson, and Lou Brock, and I don't care if they drop 1,000 fly balls or hit .110.” I just don't conceivably understand how that could be successful. But I've seen people do it, and I've seen them make it work. It’s definitely not for me, but it is one that I always look at and am like, “How does that equate to 105 wins?”

Is there any particular meta players are using in Perfect Team you’ve had to adjust to?
Jardine: There's always going to be a meta. Me personally, I don't really like the term “meta” in the way a lot of people use it. Sure, I get it, you know, there's always a funnel-based way to win, right? There's only so many teams that can win, and it's all the teams that get to the bottom of the funnel first, and sometimes there's more effective ways to get there.

If you had to say what the meta of Perfect Team has been, I would generally say it tends to be toward starting pitching. If you look over the course of the history of baseball, I think you would probably say that more often than not elite starting pitching in real life wins out versus elite hitting. There are plenty of examples of that over the course of history, especially in some of the pitcher-dominated eras like the mid- to late-’60s. You see that from time to time in Perfect Team, especially when you get to the upper tiers where you see people trotting out some of the Walter Johnson cards, some of the Pedro Martínez cards…. There's a peak Curt Schilling card out there, which is “God Tier” here in the community....

We haven't done anything to combat that – that's baseball. We provide the cards – how people choose to assemble their teams to win is totally up to them. We haven't made any sort of groundbreaking changes since 20 has come out to change how the A.I. operates, to buff hitting in any way. We just let it naturally flow through the course of baseball. And yeah, if that's how people choose to build their teams, going elite starting pitching first, so be it. It's up to the other 29 teams in your Perfect Team league to figure out how to beat you. 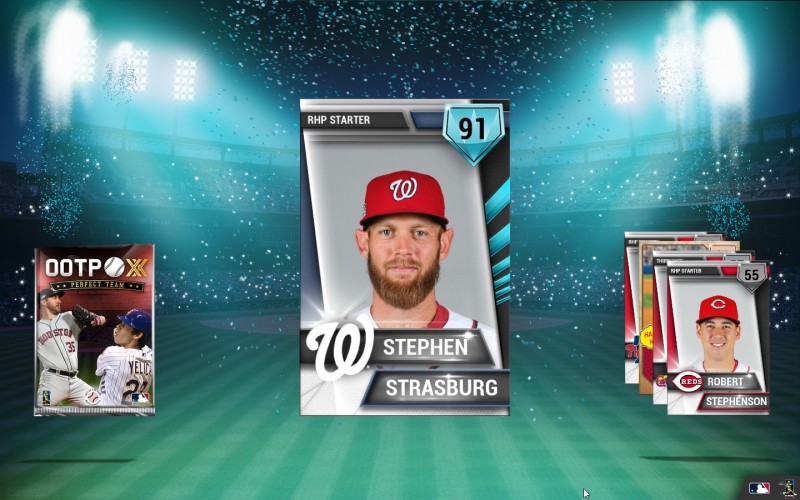 Is the mobile version of the game you’re working on – OTTP Go – tied directly to your PC-based Perfect Team? Or is it a mobile version of the regular OOTP sim game?
Rich Grisham: It's yes to both. We are building OTTP Go from the ground up...so you'll be able to play Out of the Park Baseball in a traditional way, and you'll also be able to play and participate in Perfect Team. So [it has] the Auction House, ripping packs, managing your team, checking the scores, and all of that stuff.

So to clarify, will you use your existing Perfect Team save in OTTP Go?
Grisham: The Perfect Team will be completely the same, so it'll be your Perfect Team whether you're on your PC or whether you're on your mobile device. There is a plan for the traditional Out of the Park experience to also be you know – basically, call it cross-platform play. That's the plan and the goal, and it just comes down to can we execute that in time for the release? Or will that be post-release?

Can you give any more details about the tournaments scheduled for Perfect Team by the end of the year? Will they be user-generated, what's the format, etc.?
Jardine: Initially the plan is that people will be able to participate in three tournaments at a time. The tournaments are going to be all generated by us through the servers [Kris says user-created tournaments are on the wishlist – Ed.], and they are going to cover an absolute wide variety of potential possibilities. So, for example, we may have a tournament where you can only use all bronze-level cards limited to 32 teams, double elimination. We may have another tournament that is completely open – no roster restrictions, the first 64 teams that get in there and fill it up, single-elimination, and away you go. We may have a giant 256-team, Diamond and Perfect card-only tournament. The possibilities are really endless.

If we start ignoring the traditional franchise mode and pivot toward this Perfect Team-only focus, we will lose everything that got us here." – Rich Grisham, Out of the Park Developments CMO

Are there any third-party database websites to track players and auction house data, and do you have to okay that first?
Jardine: Is there a point where we're going to have the API available and allow third-parties to make you a FUTbin, or a MUThead, or a Daddy Leagues sort of site that can aggregate auction house information, identify trends, and help people build a database of cards? That's not for me to decide. I think it would make a lot of people very happy. I think it's something that we have had discussions about and will continue to have in the future. Ultimately, if it happens it's because we as a team have decided that this is the best method for us to grow the game for the community.

What do you say to fans who worry that because Perfect Team makes money for the series, OOTP’s focus is going to skew in that direction to the detriment of the other modes?
Grisham: I say two things. Number one, don't worry about that. Number two, don't listen to me say, “Don't worry about it.” Just watch what we make. We let Out of the Park Baseball speak for itself. We're going to continue to make the core game better, we're going to introduce new things. Baseball's changing at such a rapid pace. The three true outcomes, launch angles, exit velocities, openers/closers...We cannot ignore that because that's when we will lose fans. If we start ignoring the traditional franchise mode and pivot toward this Perfect Team-only focus, we will lose everything that got us here.

Has anyone done any of the really hard collection missions yet?
Jardine: There's two collection missions I could think of right off the top of my head without having the game open in front of me that are particularly difficult. One is we have what I like to call tiered missions. So basically, we have a Chicago White Sox collection of missions, that in order to receive the very top reward, which is a perfect Ed Walsh – a great Chicago White Sox pitcher way, way back in the day – you have to complete a subset of five other collection missions collecting all kinds of players from different eras of the Chicago White Sox. It is incredibly difficult to do, and a lot of those cards are incredibly rare and incredibly expensive. But we have seen it done a few times. That is one that a lot of people on the channels I monitor are really, really psyched and really pushing toward and hoping to someday complete the Ed Walsh collection.

The other mission that has been incredibly tough and time-consuming is we have a subset of missions of collecting all the World Series champion cards for every year of the 1980s. Then you can turn that in for a World Series champions of the ‘80s mission. The last time I had checked, which this is probably four or five days ago, that mission had yet to be completed. When we launched, we had 119 missions. Within about six or seven hours we had some people who had completed upwards of 90 of them, like right off the bat. But yeah, we still have a couple of those outliers that are not completed yet. I expect because we plan on supporting collections with content as well – we do plan on releasing periodical updates with new collections into the game – that we will be introducing some pretty tough ones. Kind of in that same vein as the White Sox. We plan on doing that for all the teams as well.

What are your thoughts on the different legislation against loot boxes being formulated right now worldwide?
Grisham: Certainly, if post-sale monetization becomes illegal, then that would definitely be a bummer. But, you know, if that happens, it happens. We're still gonna make Out of the Park Baseball, right? That's what we do. We're certainly monitoring it, but we're not ready to start running around flailing with our hands up in the air. Because, again, I think our community knows what we're about. We're open, we're honest, and we respect our fans and our players. We're not out to get them. There's this attitude that I think in some parts of the world that companies are out to get people. We're not out to get anybody.

Out of the Park Baseball 20 is on sale for 50 percent off until July 9.

Madden 20 Gridiron Notes On the Game's Approach To Player Ratings