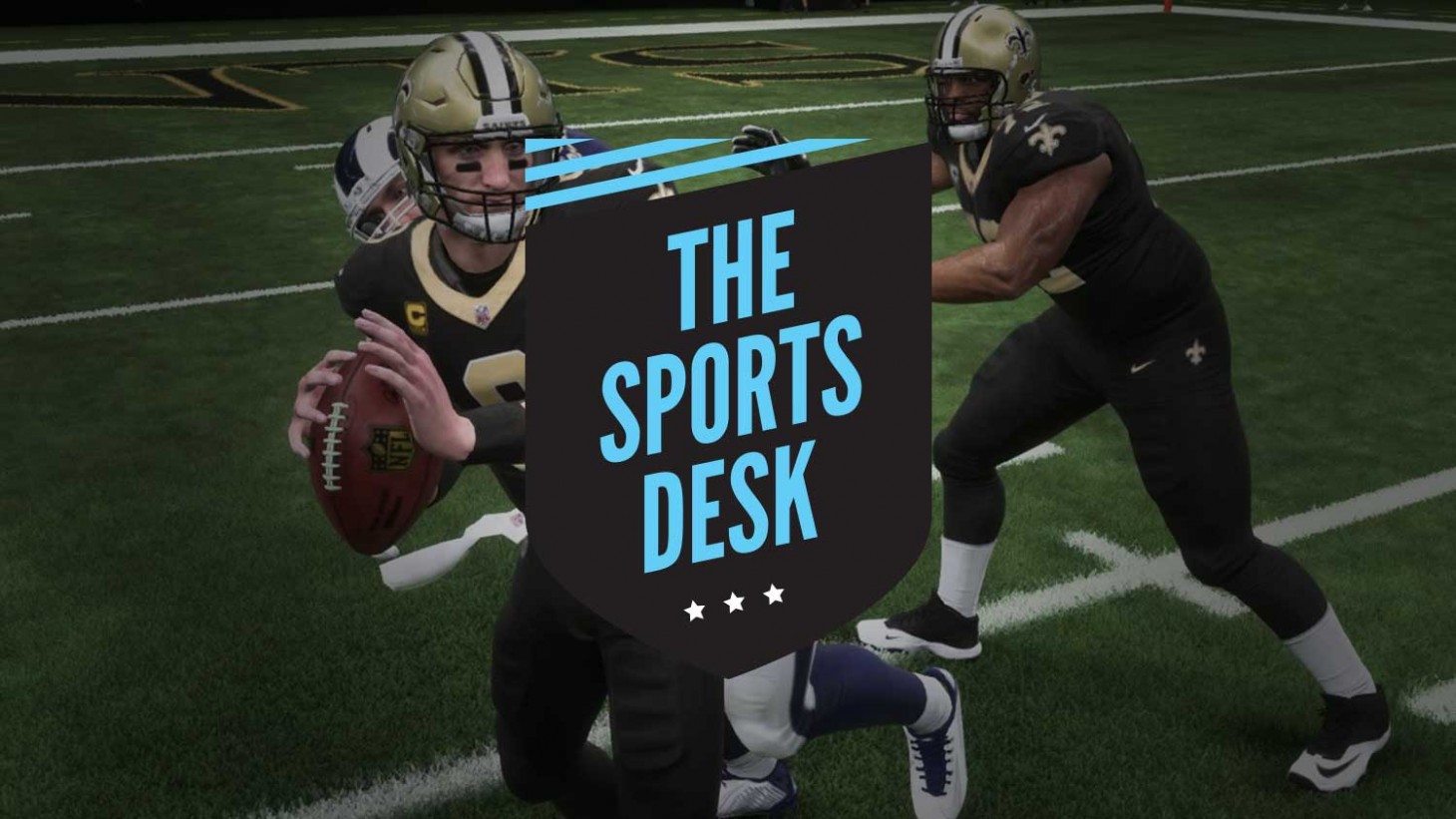 Predicting The 2018 NFL Playoffs With Madden 19

EA Sports' Madden got last year's prediction of a Patriots Super Bowl victory wrong, but that's more of an outlier in the franchise's overall good track record at picking a winner via its sim engine.

This week I've used Madden 19 to predict this year's playoffs, from Wild Card heroes to Super Bowl no-shows (using simulation game style, 6-minute quarters, and all-pro difficulty level in exhibition mode). I've tweaked the rosters as much as possible to reflect what's going on with the teams this week, but naturally the game can't sim everything to perfection. Madden's historic inability to produce realistic running-QB stats for a player like Lamar Jackson, for instance, is an interesting real-life wrinkle that is simply absent in the sim.

SEATTLE SEAHAWKS 30 - DALLAS COWBOYS 29
It's a game of fine margins, and Dallas paid the price for this with a missed Brett Maher field goal and a failed two-point conversion – either of which would have changed the game completely.

Dallas scored 13 points in the fourth quarter in an attempted comeback, but it wasn't enough to overcome the excellent game of Seahawk's QB Russell Wilson, who threw four TDS – three of them to receiver Doug Baldwin.

PHILADELPHIA EAGLES 31 - CHICAGO BEARS 30
More good news for a road team and missed kicks defined this game like the Seahawks/Cowboys one before it.

The Bears jumped to a 13-0 lead after an INT of Nick Foles (whom I assume is healed enough to play), although a missed extra point came back to bite the Bears in the ass.

Meanwhile, a 50-yard field goal by Eagles kicker Jake Elliott and a Foles TD at the end of the half helped Philly force its way back into the game, which stood at 20-17 Chicago.

In a back-and-forth game, the Eagles grabbed the lead for the first time deep in the fourth quarter (Eagles 31, Bears 30), and an interception of Bears' QB Mitch Trubisky sealed the game.

LA CHARGERS 14 - BALTIMORE RAVENS 26
The game was close for three quarters, but in the end three interceptions by Chargers' QB Philip Rivers was too much for the team to overcome. A Rivers interception at the start of the fourth quarter led to a Ravens TD, which at the time made it a two-score contest, and the game was on lockdown from then on.

INDIANAPOLIS COLTS 28 - HOUSTON TEXANS 42
The Colts jumped out to a 14-point lead thanks to a Texans fumble, but Texans' QB Deshaun Watson gave his team a chance the rest of the half.

An interception of Colts QB Andrew Luck led to a Texans field goal making it Colts 14, Texans 10, and points for the Colts were taken off the board when kicker Adam Vinatieri missed a field goal. The Texans grabbed the momentum with a Watson TD before the half and never looked back.

The game's final stats tells the tale: Watson threw for four TDs, and so did Luck, but the Colts QB also had two interceptions.

PHILADELPHIA EAGLES 24 - NEW ORLEANS SAINTS 26
At the end of the first half it's even at 10-all after the Eagles score a relatively easy TD on a short field after intercepting Saints QB Drew Brees.

Into the fourth quarter the Saints led 23-10, and an ensuing Eagles touchdown made things close, but gains by Saints running back Alvin Kamara salted away the game. The Eagles scored in garbage time, but the game was never as close as the final score appeared.

SEATTLE SEAHAWKS 14 - LOS ANGELES RAMS 34
The Rams ruled this game pretty much from the beginning, to the point where the Seahawks – down 24-7 to the Rams in the third quarter – go for it on fourth-and-two at midfield. They don't make it, and the Rams turned around and scored a TD, which was pretty indicative of the game as a whole. The Seahawks also fumbled on their next drive, which also contributed to another Rams score. Timely sacks of Seahawk's QB Russell Wilson squelched any chance of a comeback.

BALTIMORE RAVENS 14 - KANSAS CITY CHIEFS 26
Chiefs' QB sensation Patrick Mahomes' first playoff game started off with a bang as he led the Chiefs to a TD on their first drive. The Ravens kept it close, forcing punts in the ensuing drives, but at the end of the half it was 13-0 Chiefs.

A Jimmy Smith interception of Mahomes gave the Ravens life at the end of the third, but Ravens QB Lamar Jackson produced a turnover of his own to kill any potential momentum and a Ravens comeback.

Mahomes and Jackson both had similar stat lines, with one TD and one INT each, but the timing during the game of these particular stats was the difference.

HOUSTON TEXANS 35 - NEW ENGLAND PATRIOTS 32 (OVERTIME)
The Texans went up 14-0 by scoring on their first two possessions. QB Tom Brady put the home team on the scoreboard, but he was sacked by the Texans in the endzone for a safety, which at that point made the game 19-14. The Texans also scored a FG on the subsequent change of possession, but the Pats forced a Texans punt near the end of the first half, keeping the game within reach.

The Patriots get a field goal to chip away at the Texans' lead to make it 22-17, and at the start of the fourth quarter the Texans drove down the field and got three points for their efforts.

When it was his turn, Brady marched down and answered with a TD and a two-point conversion to tie the game, and a TD from Pats' back Sony Michel gave the home team the lead for the first time.

The Texans converted a fourth down at midfield and tied the game, and although Brady and the Pats had the ball at the end of regulation, it amounted to nothing and the game went to overtime.

The Patriots also got a crack at winning the game with the first possession in overtime, but it was the Texans who won the game by driving down the field and kicking the winning field goal.

LOS ANGELES RAMS 38 - NEW ORLEANS SAINTS 13
Rams head coach and offensive guru Sean McVay had all the answers versus the Saints, and Rams' QB Jared Goff ended up with a gaudy 146.7 QB rating (a 77-percent completion rating and four TDs) with the game never in doubt. By the start of the fourth quarter it was 35-10 Rams, and the normally imposing Saints home crowd was totally out of the game. Saints QB and future Hall of Famer Drew Brees was a non-factor all day and was sacked three times.

HOUSTON TEXANS 31 - KANSAS CITY CHIEFS 10
The Chief's high-flying offense doesn't carry the day, and this, combined with a porous defense, was a season-ending recipe for the Chief's QB phenomenon Patrick Mahomes.

Kansas City didn't get on the board in the first quarter, and a 63-yard fumble scoop-and-run by Texans linebacker Whitney Mercilus led to a seven-yard TD pass from Texans QB Deshaun Watson to Lamar Miller – one of Miller's two TDs on the day.

At the end of the second quarter the Chiefs failed to score, but the Texans did, which made it 21-3 at the half.

By the start of the fourth quarter it was a three-score game for the Chiefs to catch up. They failed to make a fourth-down conversion at midfield, causing the Texans to go down and kick a field goal to make it 31-10.

Mahomes finished the game with no interceptions, but he never got going, completing only 51-percent of his passes.

HOUSTON TEXANS 26 - LOS ANGELES RAMS 7
The game started out quietly with only a pair of field goals making it 6-0 to the Texans, and the first half was a story of field position. Texans' QB Deshaun Watson hit receiver DeAndre Hopkins for a 25-yard gain that set up another field goal to make it 9-0 Texans, and an additional field goal was added to bring it to 12-0 after two quarters.

The Rams started the second half with the ball and running back Todd Gurley brought the Rams to midfield, but two successive sacks of Rams' QB Jared Goff by linebacker Zach Cunningham killed the drive.

The game's first touchdown came after Watson converted a big third down and then threw a TD pass to Lamar Miller, and at 19-0, that was the game.

The ensuing drive by the Rams showed promise, but a Zach Cunningham interception of Jared Goff sealed the deal.

It was a team win, but Cunningham and Texans kicker Ka'imi Fairbairn stood out in delivering the championship. 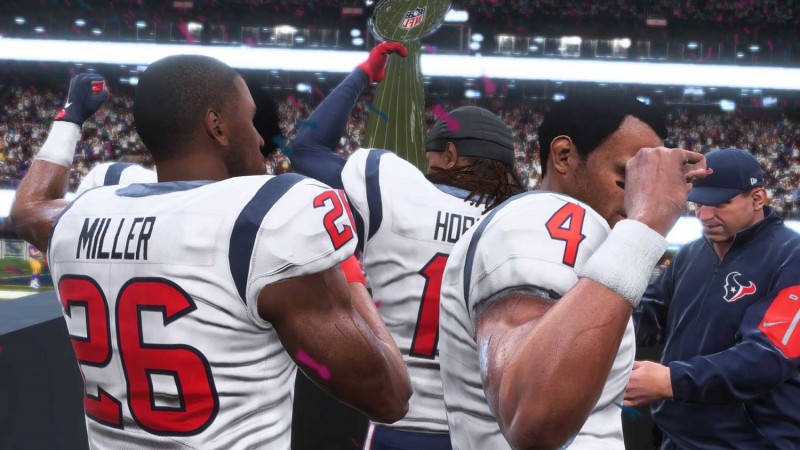