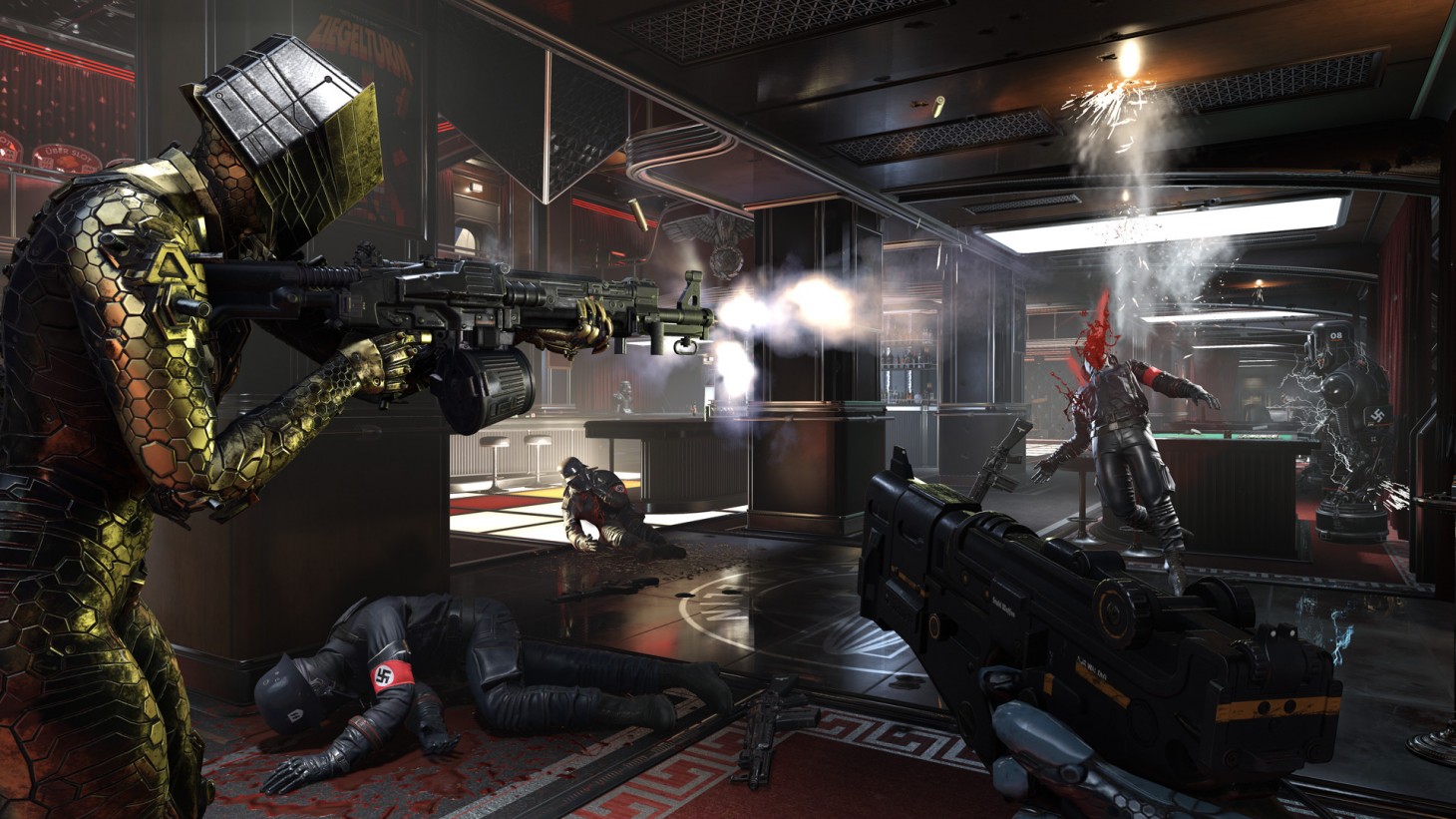 Making The Best Of Change
by Javy Gwaltney on Jul 25, 2019 at 07:01 AM
Publisher: Bethesda Softworks
Developer: Machine Games
Release: July 26, 2019
Reviewed on: PC
Also on: PlayStation 4, Xbox One, Switch, Stadia

MachineGames’ mainline Wolfenstein titles have both taken risks, either endearing or repulsing gamers with a focus on challenging, resource-fraught gameplay as well as a narrative that glues together aching emotional trauma with slapstick pulp. Youngblood is a side-story that opts for something different than what’s come before by embracing spongier combat, skill trees, cosmetics, and even live-service aspects like daily challenges. These smart changes make Youngblood an immensely enjoyable co-op first-person shooter about bashing in Nazi skulls.

When we last left protagonist B.J. and the crew in Wolfenstein II: The New Colossus, they were leading a full-on revolution to take back America from its Nazi overlords. Now, nearly 20 years have passed. America is Nazi-free, Europe is not, and B.J. is missing. His teenage daughters Jess and Soph are searching for him in Paris, carrying out operations for the local resistance to beat back the fascist stranglehold over the city. At the start, you choose either Jess or Soph, with an A.I. partner taking over the role of the other if you don’t have a co-op partner. Who you choose is ultimately cosmetic, since each sister has access to the same skill tree, weapons, and stats-boosting emotes players can deploy to get out of tricky situations.

Youngblood plays like a conventional shooter on the surface, with you mowing down waves of Nazi foes as they rush, flank, and otherwise try to annihilate you. In this entry, enemies have health and armor bars you have to knock down, but once you start leveling up (and you level up fast), you become every Nazi’s worst nightmare. For every level, you gain an attack power boost as well as points to purchase nodes on your skill tree. These nodes range from maximum health boosters to powerful abilities like being able to tackle a foe with such force you reduce them to a human slushee. You can also collect coins to buy upgrades for your weapons that include scopes, damage-increasing barrel modifications, stocks, and ammo extenders. I loved going off the beaten path in search of coins just to outfit my weapons with more doodads and even cosmetics.

All of these options give you and your partner a lot of leeway when it comes to deciding how to tackle your problems. You can customize both your skills to let you play as stealthy ninjas capable of slitting throats for a bit before the violence goes loud, for example. You can also modify your abilities to turn you into a shotgun-wielding tank of doom while your partner stands in the back with their rifle, mopping up the enemies you miss. The variety in choice makes combat satisfying on a tactical level, and every weapon in your arsenal is fun, from your starting pistol to a laser rifle capable of disintegrating enemies. The variety of tools at your disposal makes every combat encounter feel fresh and interesting all the way to the end. In the mid-game and onward, my partner and I were regularly massacring wave after wave of foes due to our ridiculous power – but that isn’t to say that combat isn’t ever challenging.

Higher-tier enemies like Panzerhunds and massive robots roam the streets of Paris. To take down these baddies (not to mention bosses), you have to work together, often with one player acting as bait to lure the enemy around while the other focuses fire on the foe. Every enemy has one of two different armor types, meaning certain weapons work better against them, so it’s also helpful to be able to communicate and prioritize over microphone chat who’s doing what. Throughout the 10-hour story campaign, I had several dramatic clutch moments where a partner used an emote that restored a bit of my health and gave me a chance to escape, or blew up an entire squadron of Nazis surging on my position with a well-placed grenade. The co-op and coordination don’t detract from Wolfenstein’s combat; they enhance the best moments to great effect.

For those who are averse to playing with other people, the A.I. option bounces between competent and surprisingly vicious. I once stood back and watched my computer partner hunt down an entire apartment filled with foes with swift ease. However, there was never any point where I felt my entertainment was tarnished by the performance of the A.I., especially given how tough later encounters can be.

Youngblood’s world is a series of open spaces like Dishonored (which is fitting given that Arkane Studios co-developed the game), with you and your squadmate unlocking districts around Paris filled with apartments, stores, guard outposts, and secret areas. You often have to think vertically to progress and reach your objectives, like hopping into a second-story apartment window to bypass a barricaded alleyway. While Neu Paris doesn’t quite rise to the level of Dunwall or Karnaca, it’s still a beautiful and disturbing place that’s worth exploring for secret areas.

My only gripe with the world is that sometimes the plentiful optional missions are clumsily designed for it. For example, several missions require you to fetch an item in one district, fast travel to another to use that item to get yet another item, and then fast travel back to your home base to complete the mission and get your reward of XP. This sort of thing doesn’t happen frequently, but feels like a chore when it does.

Youngblood excels as an entertaining shooter with the right kind of RPG elements and choices. However, when compared to the stellar and shocking storytelling of previous Wolfensteins, this entry comes up short. It has a few interesting breadcrumbs about what happened in the aftermath of Wolfenstein II, including the fates of a couple characters, but this outing is mainly focused on the exploits of its dynamic duo. As far as protagonists go, Jess and Soph are likeable goofballs – a detour from their sad-sack papa – but they don’t have any real character development. As someone who adores the saga MachineGames has constructed, I didn’t mind the lack of an engaging story that much because Youngblood is such a generously entertaining romp. 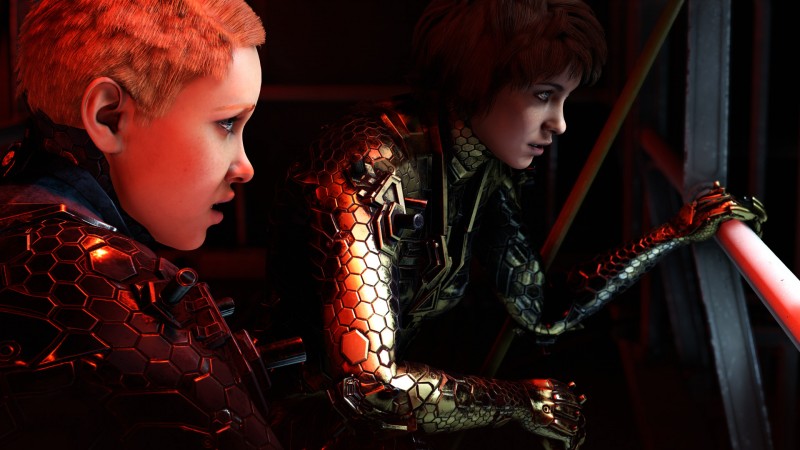 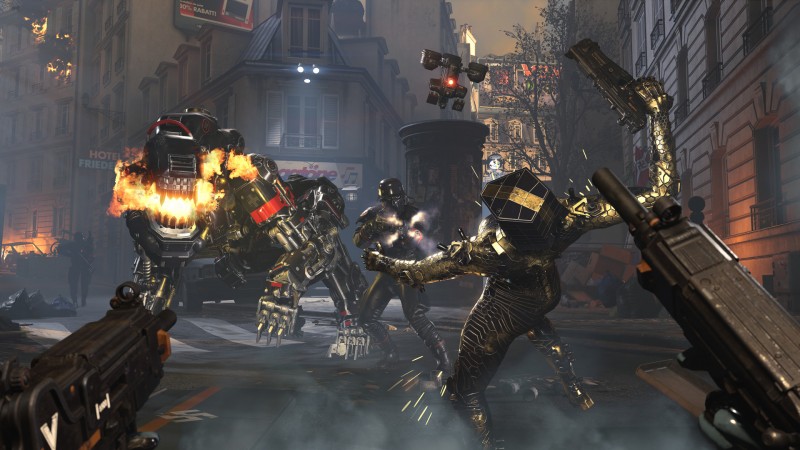 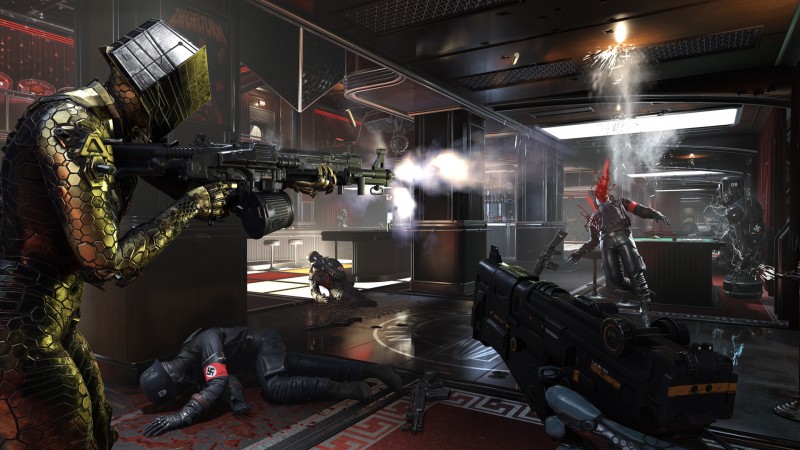 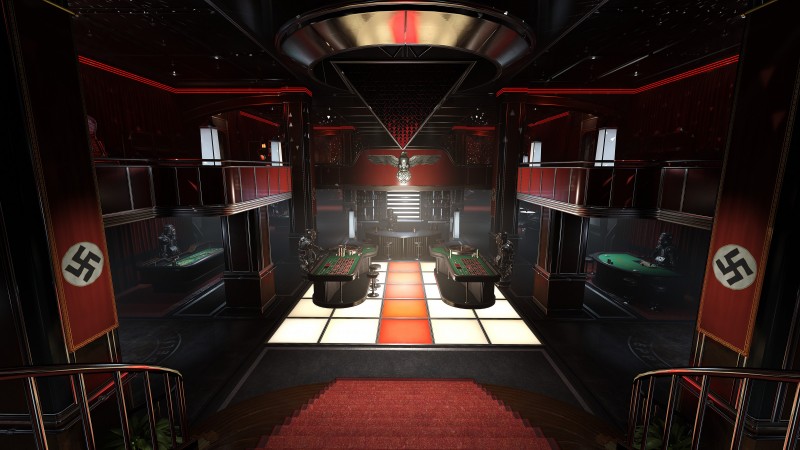 Youngblood takes some new risks for the series that pay off handsomely.

8.5
i
Game Informer's Review System
Concept Take back Nazi-controlled Paris with a friend and a lot of guns
Graphics The environmental designs are the series’ most colorful and eye-catching yet, from city districts to subterranean military bases. However, character animations are still noticeably stiff
Sound The soundtrack bounces back and forth between synthwave and heavy metal, providing a nice beat to battles large and small
Playability Like previous Wolfenstein titles, Youngblood’s systems and controls are easy to grasp
Entertainment This side chapter provides a steady dollop of Nazi-massacring fun, especially if you have a pal along for the ride
Replay Moderately High