Since the first Banner Saga’s release in 2014, developer Stoic has strived to create an epic adventure set in a snowy world inspired by Viking mythology. In the first two games, a dark storm impressing itself upon the world forces a group of humans and giants to work together for survival. They strike out to find sanctuary and hold out against the darkness – and the army of stone soldiers its brought in its wake. Both games required players to make tough choices during the The Oregon Trail-inspired journey where a stranger on the road could be a new hero to use in battle, or a scout for bandits waiting to slit the throats of your clansmen. The third Banner Saga successfully concludes an odyssey that’s always been about holding players accountable for their choices, but the ride is still bumpy as the end of the road approaches.

Picking up immediately after the end of Banner Saga 2, this installment splits our time between two protagonists. The first group spends their time holding out in a fortress at the end of the world as enemies descend and supplies dwindle. Meanwhile, in the belly of the planet, a small group of warriors leads a suicide mission at the core of the darkness in the hope of killing it. Both sides of the tale are compelling, and you must make smart choices for survival in different ways. The fortress segments have you negotiating politics, like who will lead the kingdom assuming you survive this onslaught, and managing supplies for various factions in order to keep the peace. The suicide mission segments require you to settle petty disputes and manage the egos of your party as you undertake this dangerous task.

In a smart, topsy-turvy design decision, Banner Saga 3 upends the series’ signature counter at the top of the screen. In the previous games, this counter kept track of the days you had traveled, giving a clear sense of the breadth of your journey. Now the counter has become a countdown, tracking how long until your fortress breaks against the waves of darkness at the gate. This takes into account all the choices you’ve made throughout the series, factoring in your supplies and how many clansmen you’ve kept alive.  You’re not screwed if you’ve made poor choices throughout the series (you just have to engage in more battles), but it’s a strong feature that really makes you feel the echo of all your decisions throughout Banner Saga as a whole.

The battle system is essentially unchanged from the first two games. A new mechanic has characters earning titles to receive various stat bonuses once they hit level 11 – like Death’s Messenger making your units’ attack power stronger – but everything else is familiar. You’re still moving on a tile-based battlefield, using your units to take out the enemy opposition. Sometimes you have to accomplish a special objective, like clearing out multiple waves of enemies or attacking road blocks so the caravan can proceed its journey, but your mission is usually to clear the board of foes. I spent most of the battles wanting to barrel through them to get back to the story. The battles aren’t a chore, but they also don’t stand out next to genre siblings like Fire Emblem and XCOM. Luckily the narrative is the main drive here.

The Banner Saga 3 stays true to the series’ bleak ethos of crushing consequences for difficult choices. You don’t have as many decisions to make in this entry, since it is focused on holding you accountable for your previous actions, but the occasional choices all have devastating consequences that shape the endgame in dramatic ways, like losing a prominent character or shaping the world in certain ways. My only complaint on the narrative side of things is that the characters don’t get enough time to shine. The previous two entries were good about taking a minute so you could talk with people in your party and get to know them. The fast pace of the story in The Banner Saga 3, constantly pushing you toward the end, means that character development is often eschewed. Sometimes I’d lose a character to a bad choice and shrug my shoulders, because I felt like The Banner Saga hadn’t done the legwork to make me care for them. However, most losses, especially for the characters who have been with the caravan since the first game, are appropriately heart-rending.

As a standalone game, The Banner Saga 3 is the weakest of the bunch. As a conclusion, it does its job well, marrying beauty to melancholy and making me think long and hard about what sacrifices I was willing to make for the good of the world. Though I left my time with my caravan wishing I had been given more opportunities to get to know them better, I still felt my long trek through blood and snow was worth having, and Stoic’s somber adventure has lived up to its exhausting ambitions.

For more on Banner Saga, be sure to read our reviews for the first and second games. 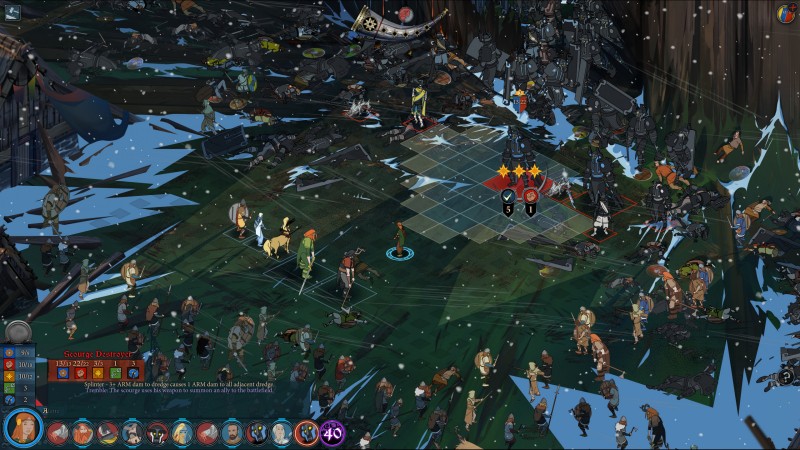 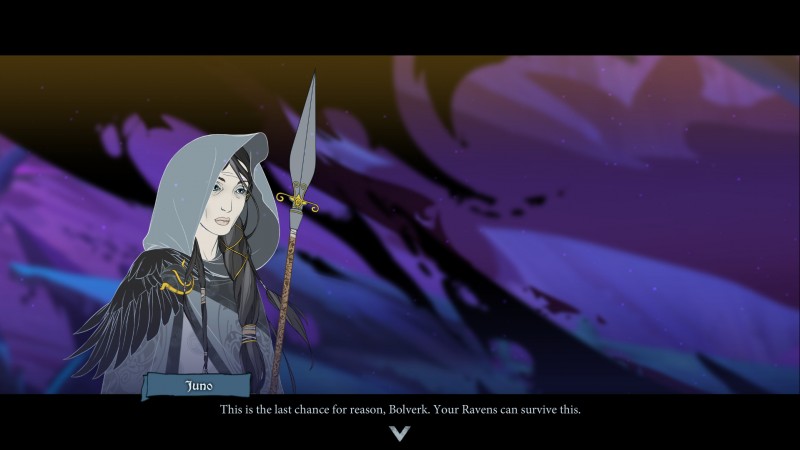 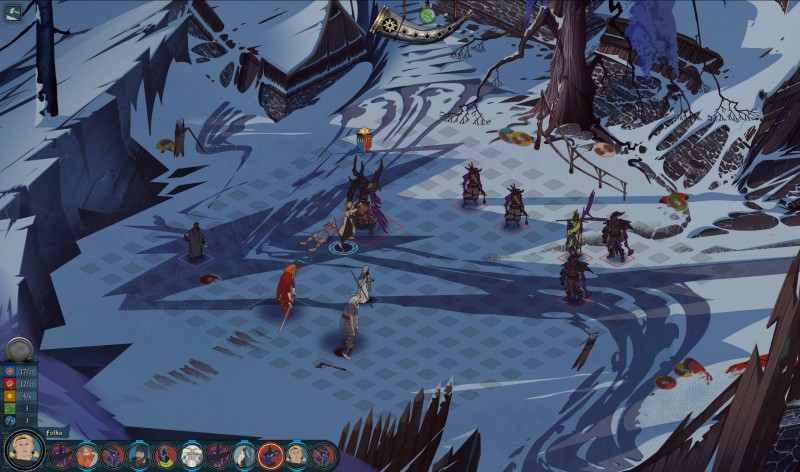 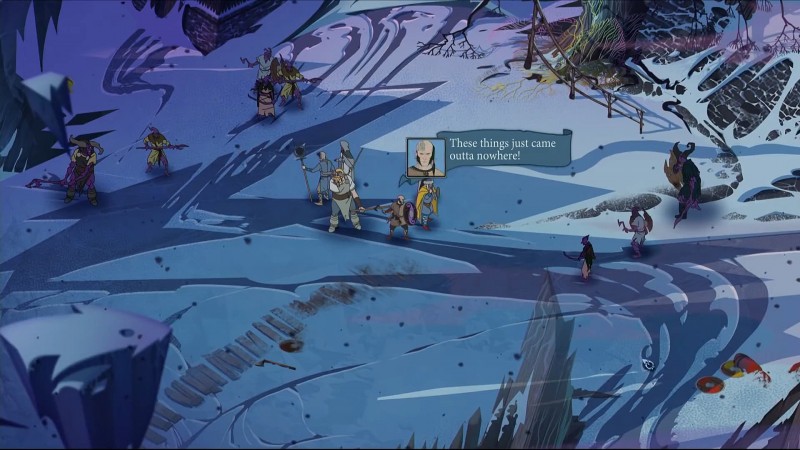 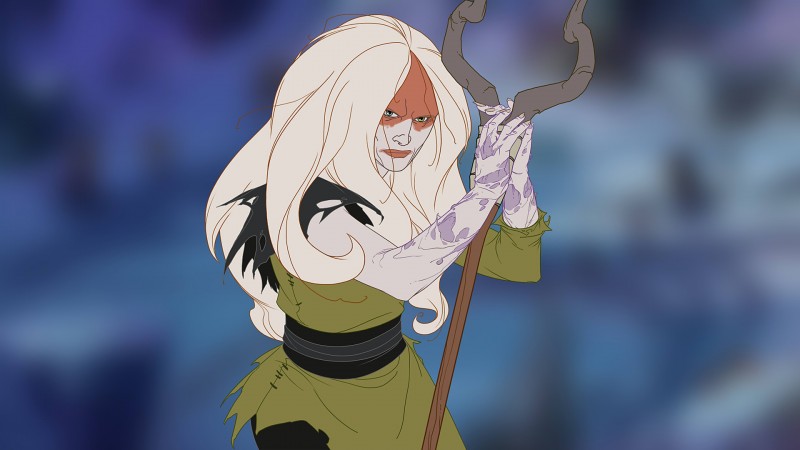 8
About Game Informer's review system
Concept
Lead your caravan of bickering humans, centaurs, and giants to ruin or salvation in the conclusion of this snowy epic
Graphics
Beautiful art that recalls the strongest works of Don Bluth (Dragon’s Lair) remains one of Banner Saga’s finest qualities, though the limited animation is a shame
Sound
The soundtrack ping pongs between soft, subtle tragedy and orchestral action in a pleasing way. The voice work is sparse but effective when used
Playability
The strategy gameplay is straightforward once you play the tutorial battle and get a handle on your units’ special abilities
Entertainment
This concluding chapter is uneven due to breakneck pacing and minimal characterization, but it’s ultimately a satisfying finale that remains true to the melancholy soul of the series
Replay
Moderate