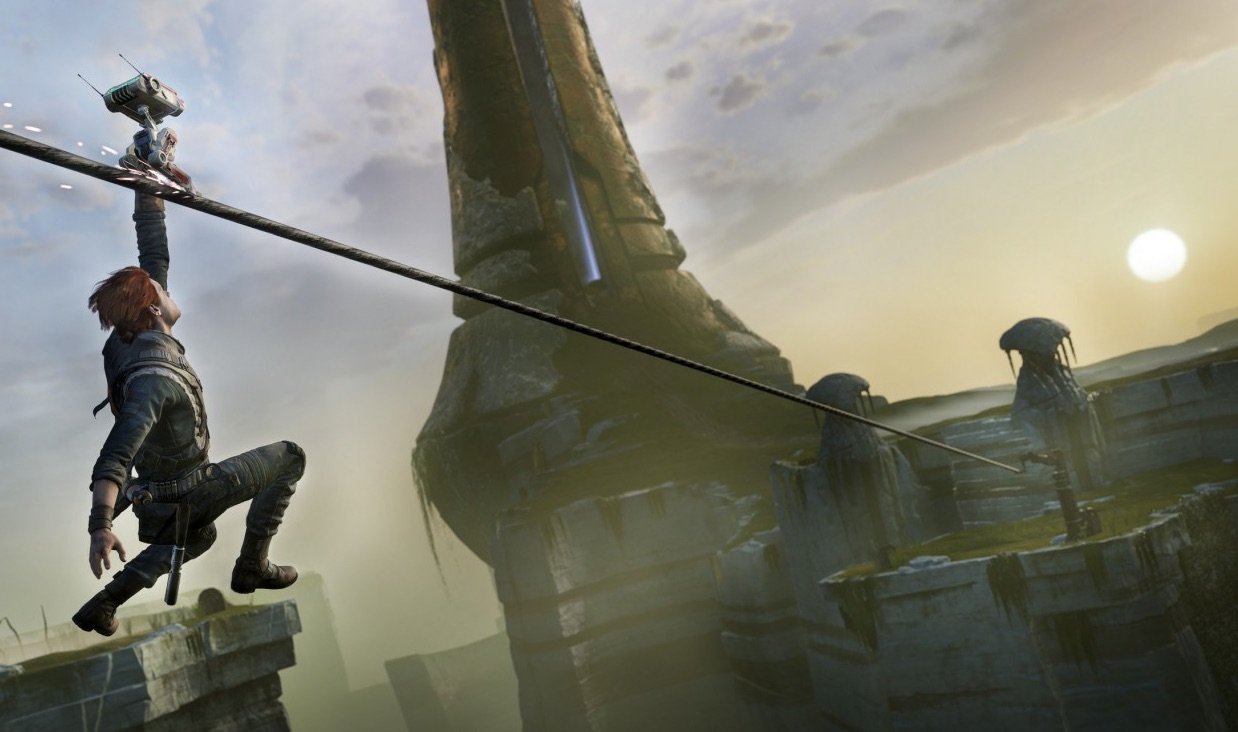 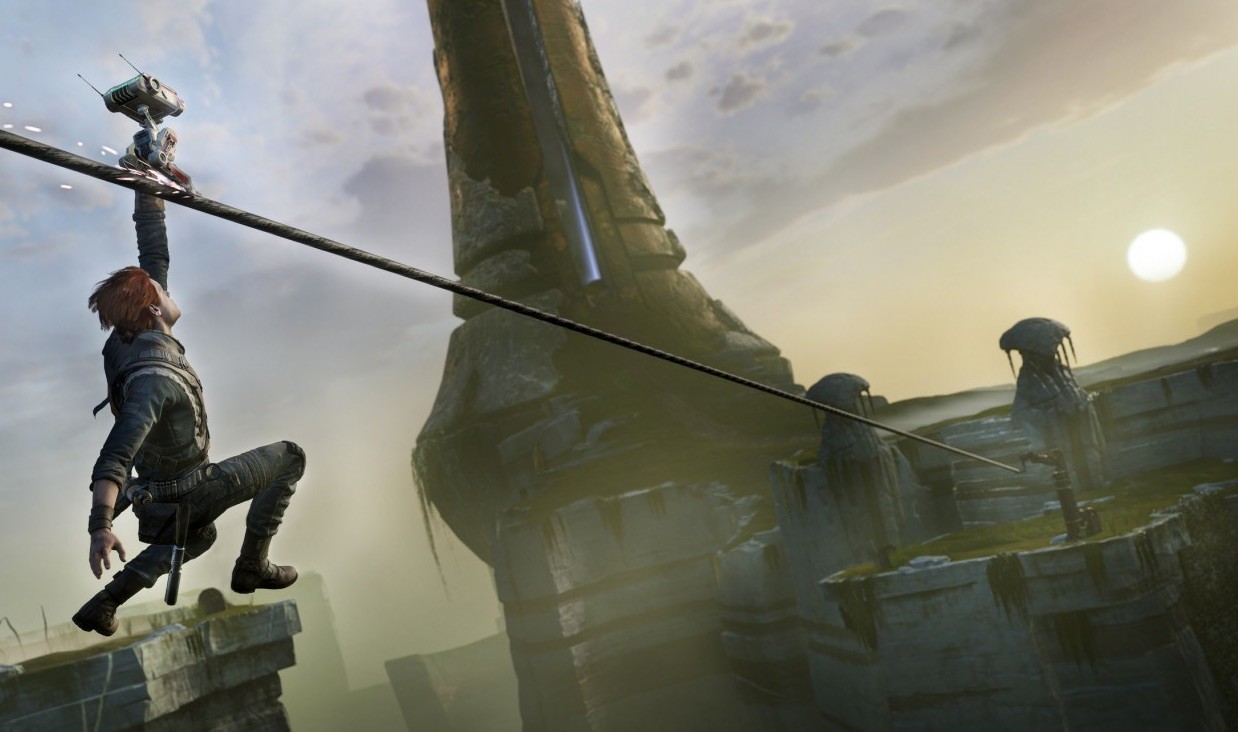 A raw, untamed power courses through Star Wars Jedi: Fallen Order. Much like a Padawan in training, this game is a student of the Force, not a master. The lightsaber is used skillfully, twirling in exhilarating ways to chop down Imperial troops, and the Force flows into acrobatic movements, but the Padawan’s motions are rough and unrefined. This inexperience fits with the story of a Jedi losing touch with the Force, but is more of a reflection of Jedi: Fallen Order missing a coat of polish.

Jedi: Fallen Order reminds me of Naughty Dog’s first Uncharted game: an ambitious action experience that was just a little off in its delivery. Respawn has made a game that is every bit as ambitious, and despite showing a little sloppiness in execution, is an enthralling and fully featured Star Wars experience, hitting with a commanding bang in its cinematic presentation, environmental exploration, and journey shared between a Jedi and his droid. 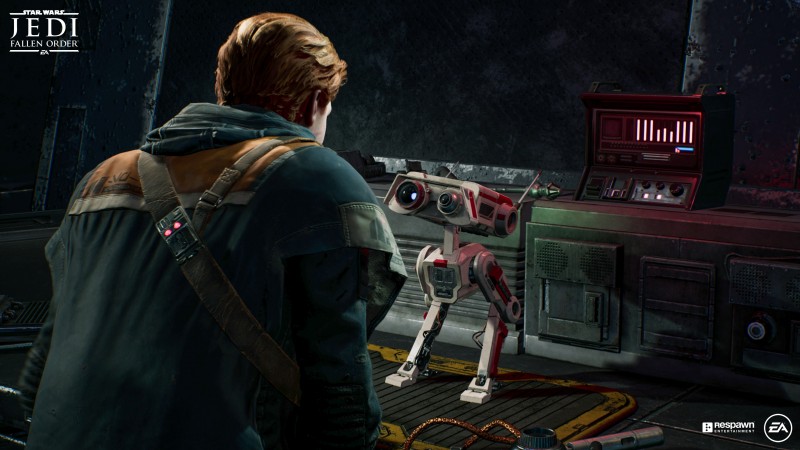 The first shot of the game sets the tone for the entire adventure. We see a junkyard filled with giant derelict starships being dismantled by the Empire for parts. TIE fighters roar into view, and the camera pans to show the immense scale of this sequence. The detail showcased in this moment is impressive, looking like an expensive shot from a new Star Wars film. The orchestration that swells is also reminiscent of John Williams’ work, again making it feel like an epic cinematic experience.

Just when it would seem Respawn is following George Lucas’ formula, the soundtrack switches to something different with a throaty alien singer that doesn’t sound like typical Star Wars. We then meet protagonist Cal Kestis, who is listening to this strange song through a pair of headphones as he works. This moment screams of something new, which Jedi: Fallen Order embraces fully. As the game unfolds, you see stormtroopers, a few familiar faces, and a Jedi learning the ways of the Force, but we see these iconic elements through the lens of new characters, worlds, and story ideas. 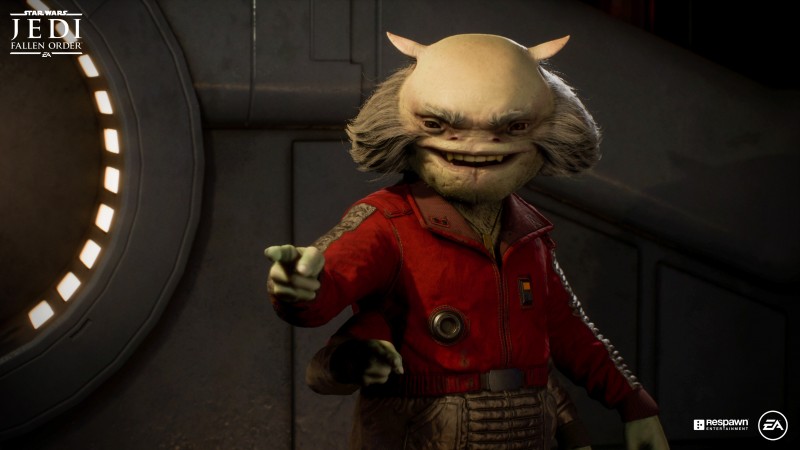 Cal is immediately likeable as a conflicted soul, and is brought to life wonderfully by actor Cameron Monaghan. Cal’s cohort, a droid named BD-1, is equally as fun to get to know, resembling a friendly lapdog more than any other droid in Star Wars. They have a playful banter and experience hardships with one another, and their bond forms the foundation for a hell of an adventure. They explore ancient shrines looking for clues that could hold the answer to resurrecting the Jedi Order. The mystery keeps the story engaging, as does the well-defined threat of the Inquisitors, Jedi-slayers who are hunting Cal and always seem to be one step ahead of him. Excellently penned flashbacks are sewn into this nicely paced narrative to add extra dimensions to the characters and conflict at hand.

The one area where the story stumbles is in revisiting previously explored worlds for narrative reasons. As exciting as it is to dive deep into Dathomir’s witch tombs or see the untamed beauty of Kashyyyk, the reasons to return to these planets often seem like a bit of a stretch. The thinking is along the lines of “The door’s locked. Oh well. Let’s leave and see if we can find a way to open it on another planet.” That said, I enjoyed veering off of the story path to explore worlds on my own, since players can freely go to whichever one they want. 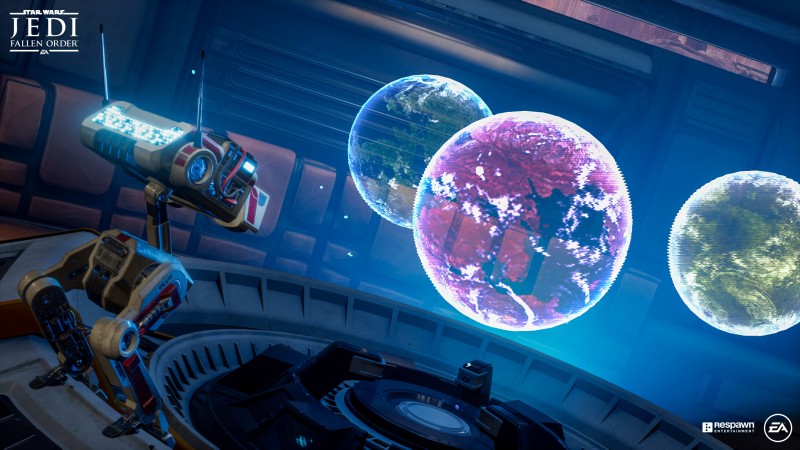 Jedi: Fallen Order’s most dynamic and entertaining quality is exploration. Cal begins with basic human abilities, but quickly remembers how to run along walls, double jump, and use the Force to push and pull objects. He taps into his gifts to navigate treacherous ground in finely crafted open environments filled with soaring verticality, snaking paths, and plenty of thrilling platforming and combat challenges. Cal’s acrobatic movements are reliable and easy to read, and should you fall, the game doesn’t punish you. You just take some damage and get another shot. Most of Cal’s actions fit into the Jedi playbook, but Respawn went a little too far in its attempts to create dynamic action, like lengthy Super Mario 64-like slippery slopes and odd gelatinous bouncy pads that don’t really scream “Star Wars.” It gets a little too gamey in these moments.

Although you spend some time retracing steps through environments, shortcuts are placed in convenient spots and most areas are filled with secrets galore, such as additional stim canisters, outfits and ponchos for Cal, and paint schemes for BD-1 and the crew’s ship, the Stinger Mantis. The stim canisters are incredibly valuable, as the game is challenging (even on the default difficulty) and I usually found my health to be in the red, hoping another checkpoint was nearby.

Combat isn’t the central focus of Jedi: Fallen Order, and I was surprised (and pleased) that Respawn didn’t throw in encounters just to up the intensity at times. Stretches of play are without them and that pacing works well for the adventure aspects. Battles are where the biggest thrills and problems reside. Swinging the lightsaber feels damn good; it’s fast, powerful, feels dangerous, and delivers big results, like slicing rampaging beasts clean in two. Respawn’s decision to make combat more of a defensive game also pays dividends in terms of strategy and flow. I like that the fights are deliberately paced, and allow for multiple targets to be engaged at once, such as exchanging lightsaber blows with a purge trooper and then in between swings using Force Push to send a rocket back at a stormtrooper. You don’t just run into a room and start swinging. You strategize and pick at enemies carefully. Timing parries can be tricky, but should you succeed, reward you with a big hit or instant kill that looks amazing.

The combat ideas are sound and lead to some awesome moments that make you feel like a true Jedi, but the enemies can throw kinks into your plans, as some of their movements are not telegraphed well, and you sometimes see animation hitches that can’t be predicted, and make parry efforts next to impossible. Additionally, archers and snipers sometimes freeze up and won’t fire at you, leading to a strange showdown where nothing is happening for 15 to 20 seconds. More troubling, I ran into numerous issues with BD-1 not healing me, although Cal audibly calls for it. Having this happen against the grueling end-game bosses was somewhat maddening. Given how many ledges are in most worlds, don’t be surprised if a combat encounter is interrupted by Cal getting knocked off a cliff and then magically reappearing to lock sabers again. It’s jarring, and speaks volumes to the combat being a little rough overall in terms of Cal's base movements. The visuals, while stunning in composition, can sometimes be affected by texture pop-in, lighting not displaying correctly, or enemies quickly dropping into place as a door is opened.

Despite these numerous little problems, Respawn’s maiden voyage with Star Wars is largely a success. I couldn’t put this game down, both for the thrill of exploring and wanting to see where the story took me next. The inspirations taken from Dark Souls, Uncharted, and Metroid Prime unite to create something unique that just happens to work incredibly well for this beloved license. Like most starships in this universe, Jedi: Fallen Order could use a little polish, but the rust doesn’t hold it back from roaring with excitement. 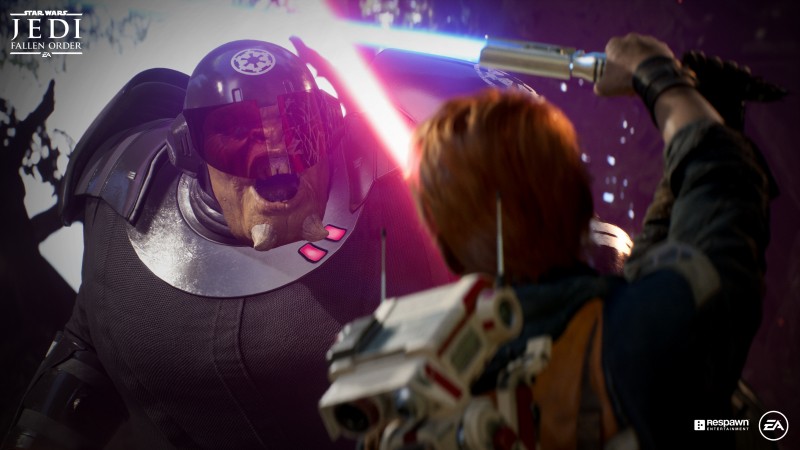 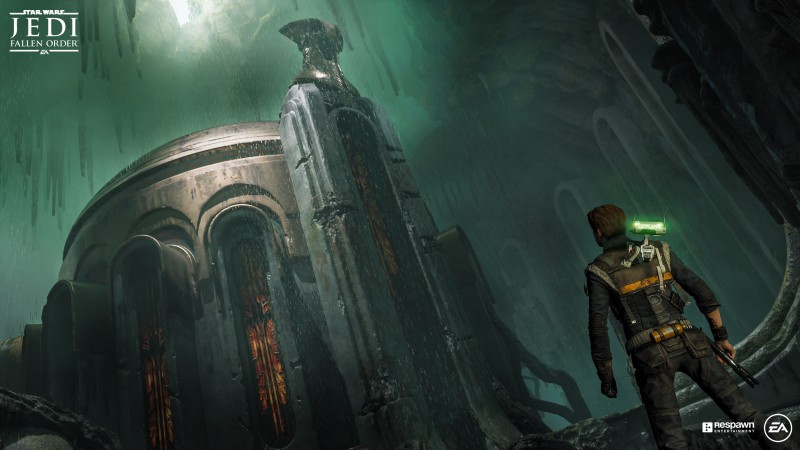 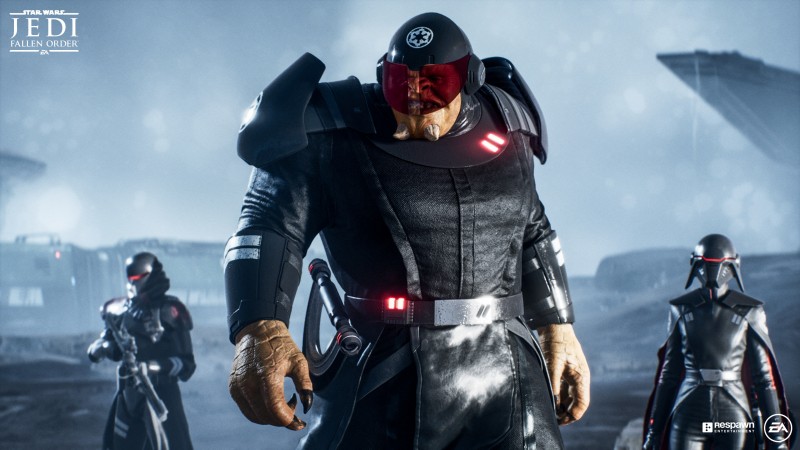 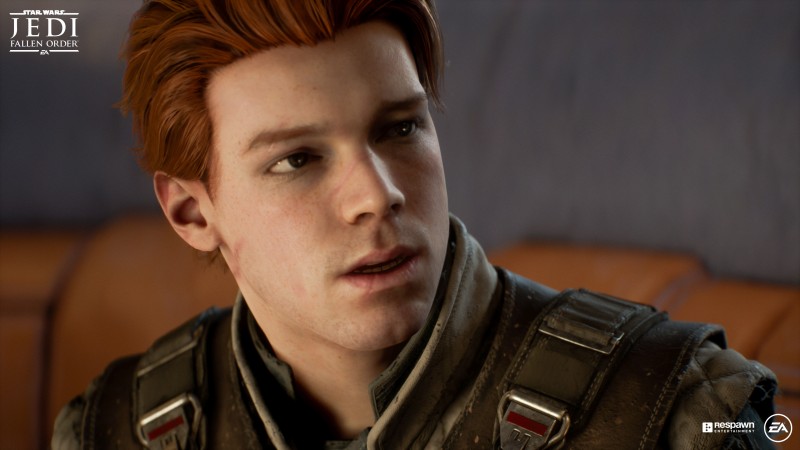 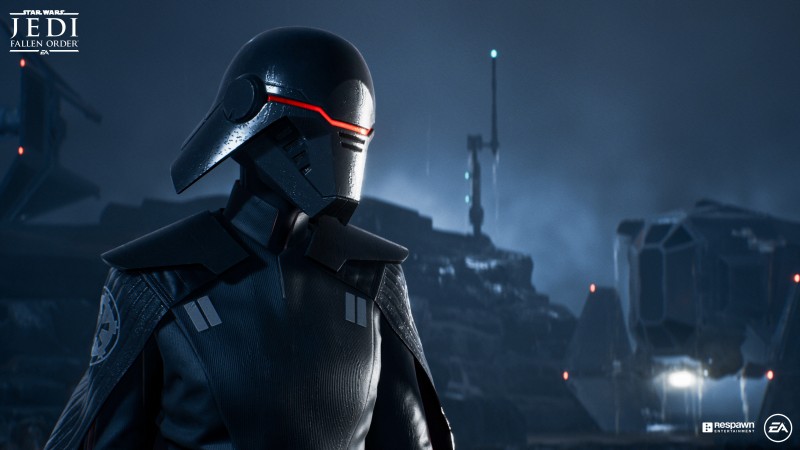 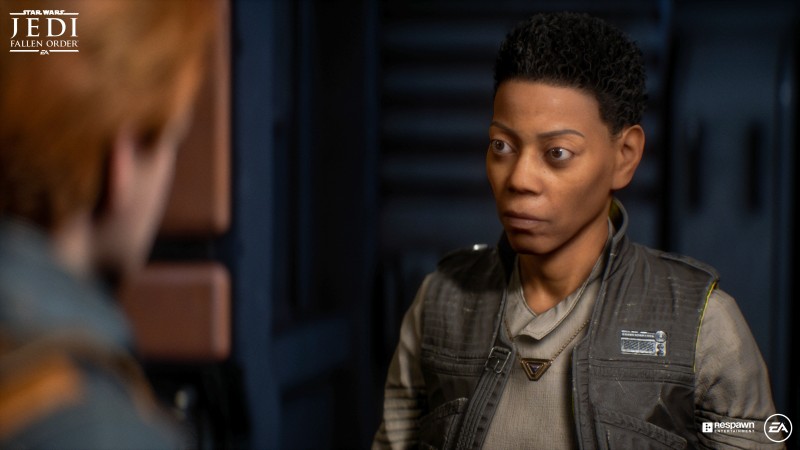 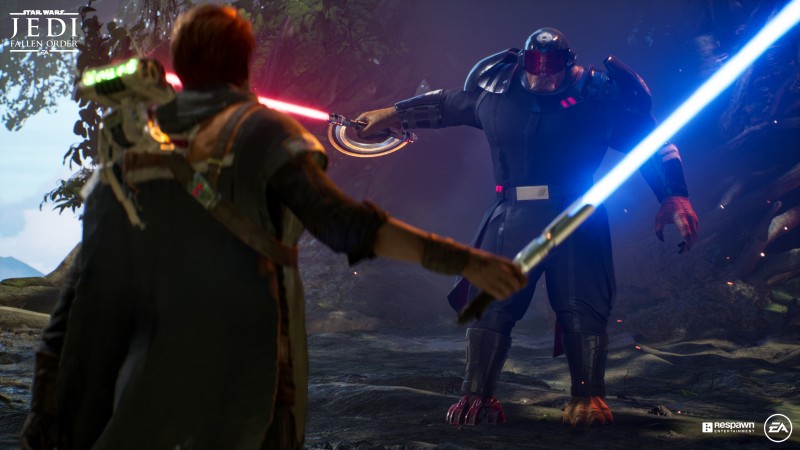 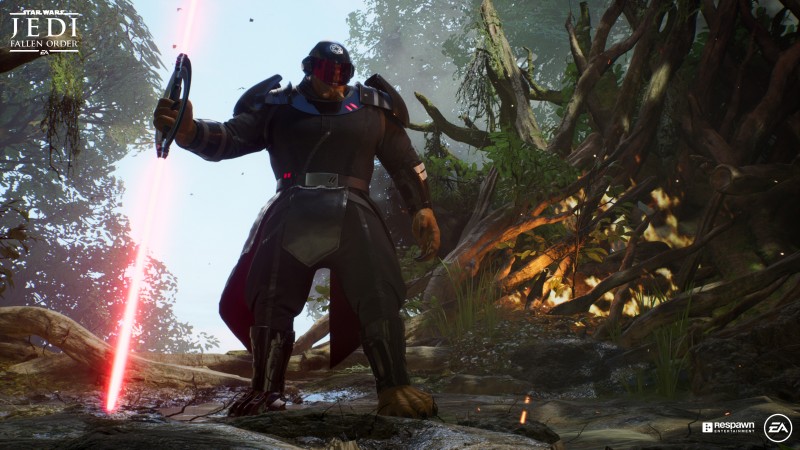 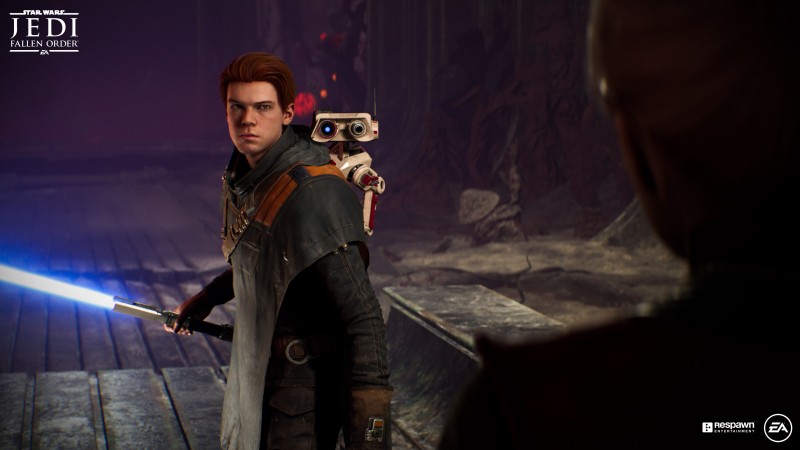 Off
8.75
About Game Informer's review system
Concept
A journey of discovery unfolds in a sprawling, open-ended adventure that succeeds in both story and action
Graphics
The amount of detail on display in every area is incredible. However, enemy animations can be tricky to read, and some texture popping occurs
Sound
The orchestrated score, BD-1’s unique chirps, and all of the voice work are superb and make for a hell of an aural Star Wars experience
Playability
Traversal is slick, allowing players to run along walls, double jump, and using the Force to pull a vine to them with ease. Lightsaber combat is fluid and intense, but feels a little unpolished
Entertainment
Jedi: Fallen Order tells a new Star Wars story and takes players to new places. It sits nicely alongside the Rebels and Resistance TV shows, which also dare to be different
Replay
Moderately High