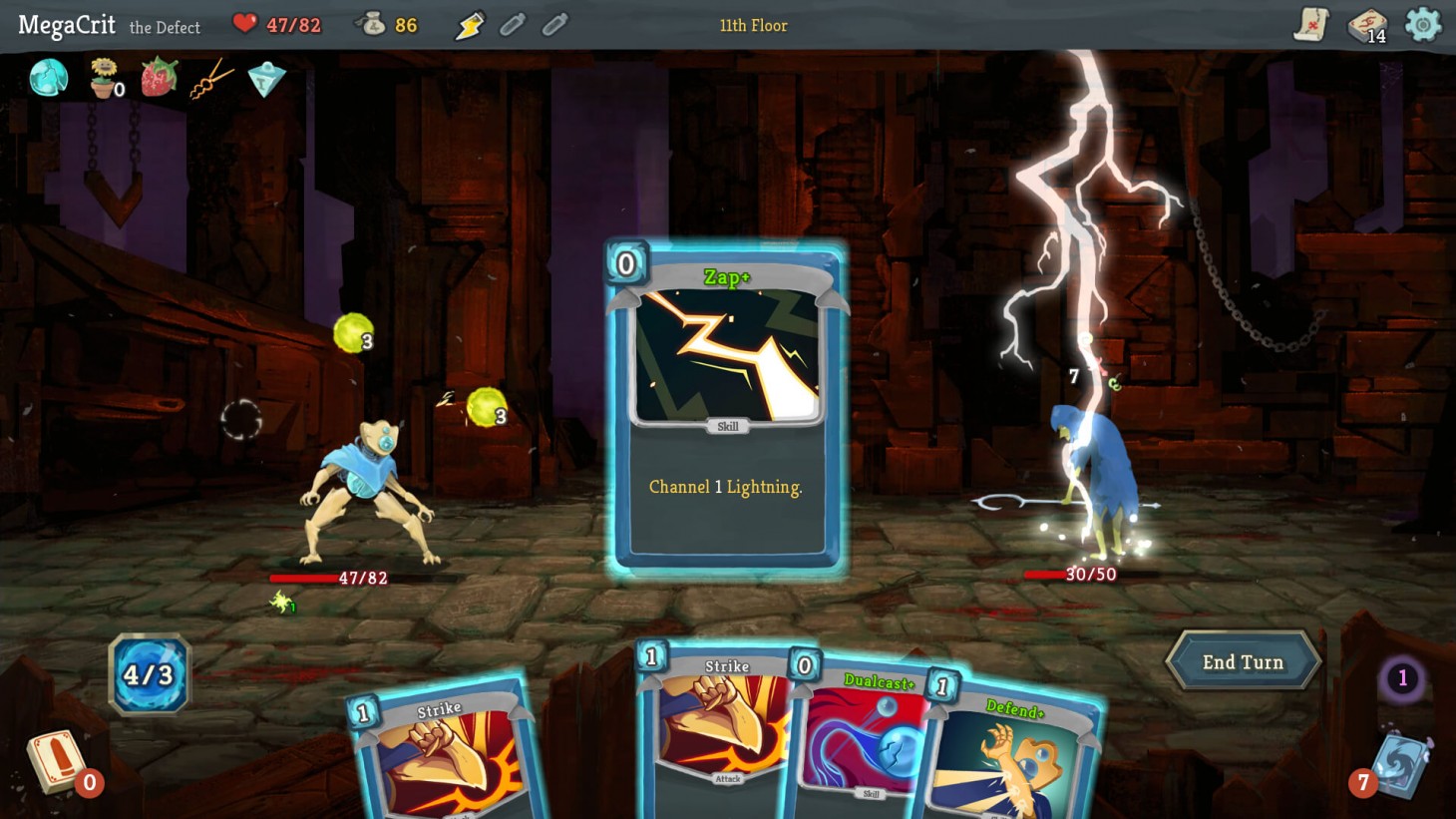 Slay the Spire is a fusion of deckbuilding card games and roguelike RPGs. Before your eyes glaze over and you tune out, don’t be turned off by those terms; Slay the Spire has nothing to do with Magic: The Gathering, Hearthstone, or any collectible card game. Instead, cards are simply the tools you use to create the classic fantasy archetype of your choice to brave the many dangers of a challenging dungeon that’s deliciously different every time. Whether you fall to the lesser slimes and thieves or succumb to a floor’s big boss, you’re inspired to climb again and again to try new builds and experience new adventures.

As a warrior, rogue, or robot mage, you start with a deck of basic attack and defense cards each game. As you travel, you add and remove cards to craft a (hopefully) overpowered deck to destroy your enemies. Most of the time, you want to distill your deck down to the purest and most powerful cards, but some strategies call for towering stacks of cards. In addition to your ever-shifting arsenal, you acquire potions and relics (passive and often significant buffs, some hinging on specific game plans) to help you on your way. Each massive floor of the spire presents standard battles, elite monsters, and shops. You also encounter random adventure vignettes that could have you betting on an arena battle, spinning a goblin wheel, stealing valuable treasure, and many other choices that can augment your playstyle. One run may prod you into a build embracing discard mechanics, another may allow you to conserve your resources from turn to turn. The choices are always yours, but relics and available cards can push you in varying directions.

Slay the Spire is all about options that are different every time, leading to nearly infinite replayability even on the standard difficulty (with an optional fourth act that can be unlocked for the hardest of the hardcore). The core loop is intensely compelling, pitting you against bosses, monsters, and encounters with vastly disparate tools each run, even though one death shoots you back to the bottom floor of the spire for a fresh start. Whether you’re creating a knight with impenetrable armor, a poison-stacking scoundrel, or an orb-cycling caster, coming up with all kinds of strategies that change each game based on the hand you’re dealt is incredibly satisfying and fun. Sticking a card that triples poison on a boss, coming up with a zero-casting cost dynamo that can play a whole deck in a single turn, or just piling on heaps of strength and smashing through your enemies feels magical. Yes, elements of randomness can boom or bust a run, but they’re not going to dissuade you from climbing again and again.

You’re not getting any permanent power boosts from run to run, but points acquired get you closer to unlocking new cards and relics that can show up in future attempts, some that allow for creative or radical theorycrafting, like building a deck that attempts to reduce your draw pile to zero continuously so that a special card that requires that condition to play can devastate opponents. Even after you’ve memorized every boss ability and mastered every card and relic, voracious players can tackle daily challenges with various modifiers that let you pit your skills against the world and shoot for a high score. You can also tinker around with custom modifiers and craft a dungeon dive to whimsical and wild specifications. After a brutal defeat, there’s nothing better than setting a run up where enemies drop relics instead of cards, you can ignore dungeon paths from room to room, and all enemies have the slow debuff. You have lots of mods to pick from, so the possibilities seem endless.

Slay the Spire is a fascinating fusion of genres that are often known for their lack of accessibility and niche appeal, but it defies those notions and provides a playground of variation and wonder where the next discovery is always right around the corner. Instead of being dismayed when a boss lands an alpha strike that blasts you back to the beginning, it’s an inspiring call to start climbing again with new choices, new decisions, and maybe just a little bit of luck. 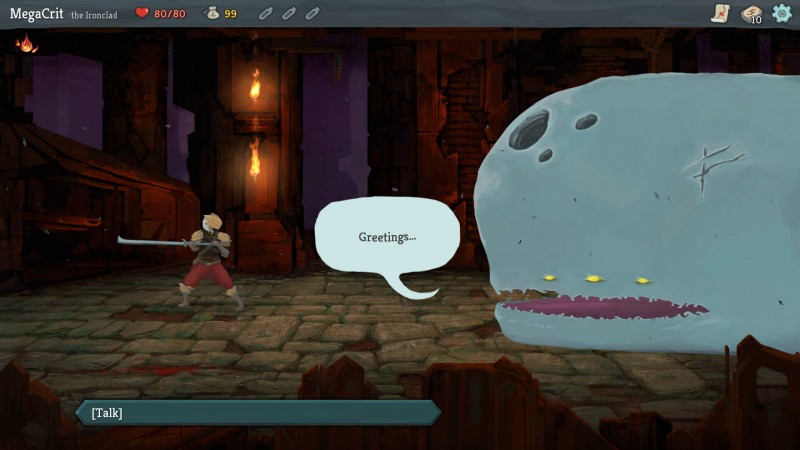 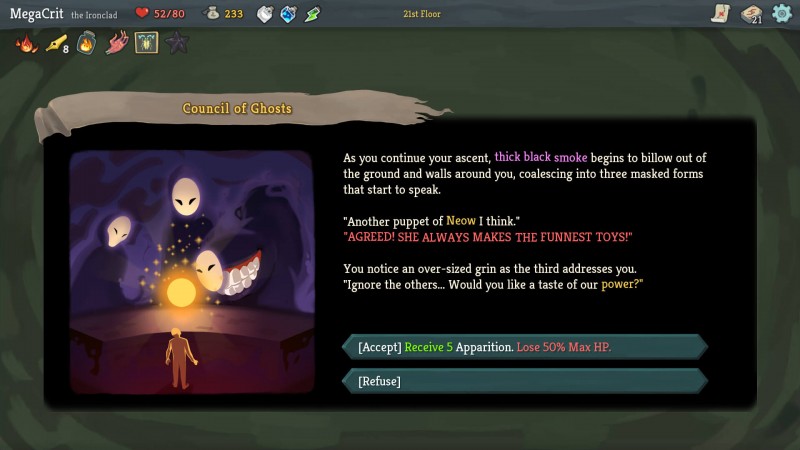 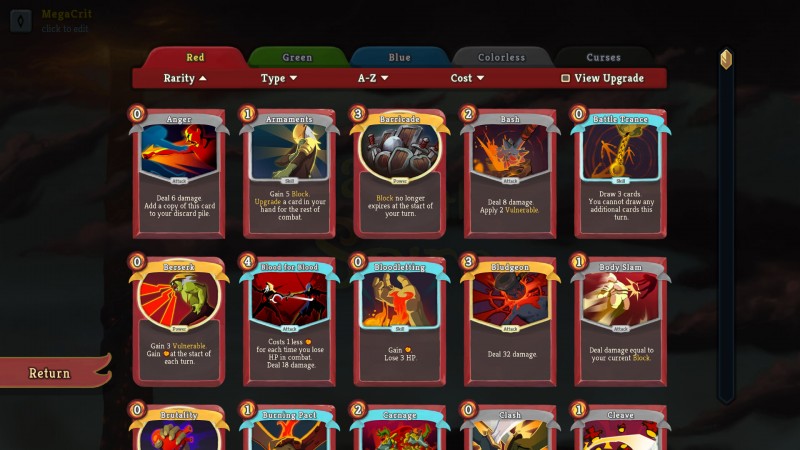 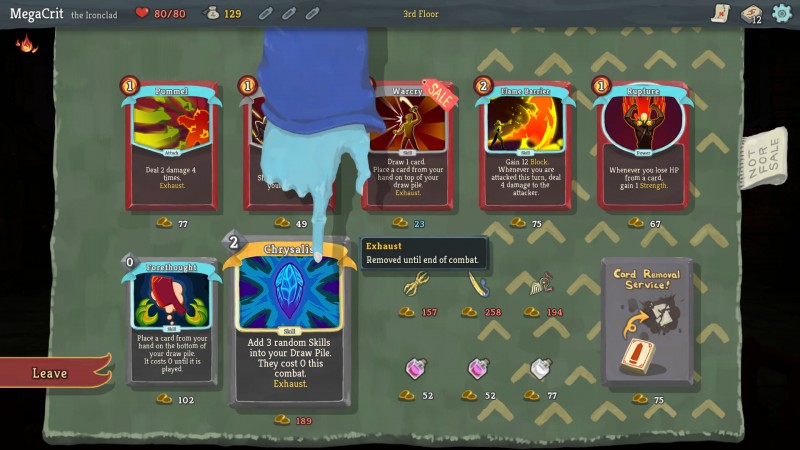 Off
9.25
About Game Informer's review system
Concept
Climb the spire and defeat big bosses with different builds and options each time
Graphics
The ‘90s Flash-game visuals don’t do the title any favors, but they can be forgiven considering the rest of the ensemble
Sound
The soundtrack highlights earnest exploration and dire boss battles
Playability
Players of all skill levels can easily understand and engage with the mechanics
Entertainment
An incredibly well-crafted dungeon delve with hundreds of hours of crawling chaos
Replay
High 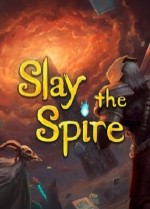