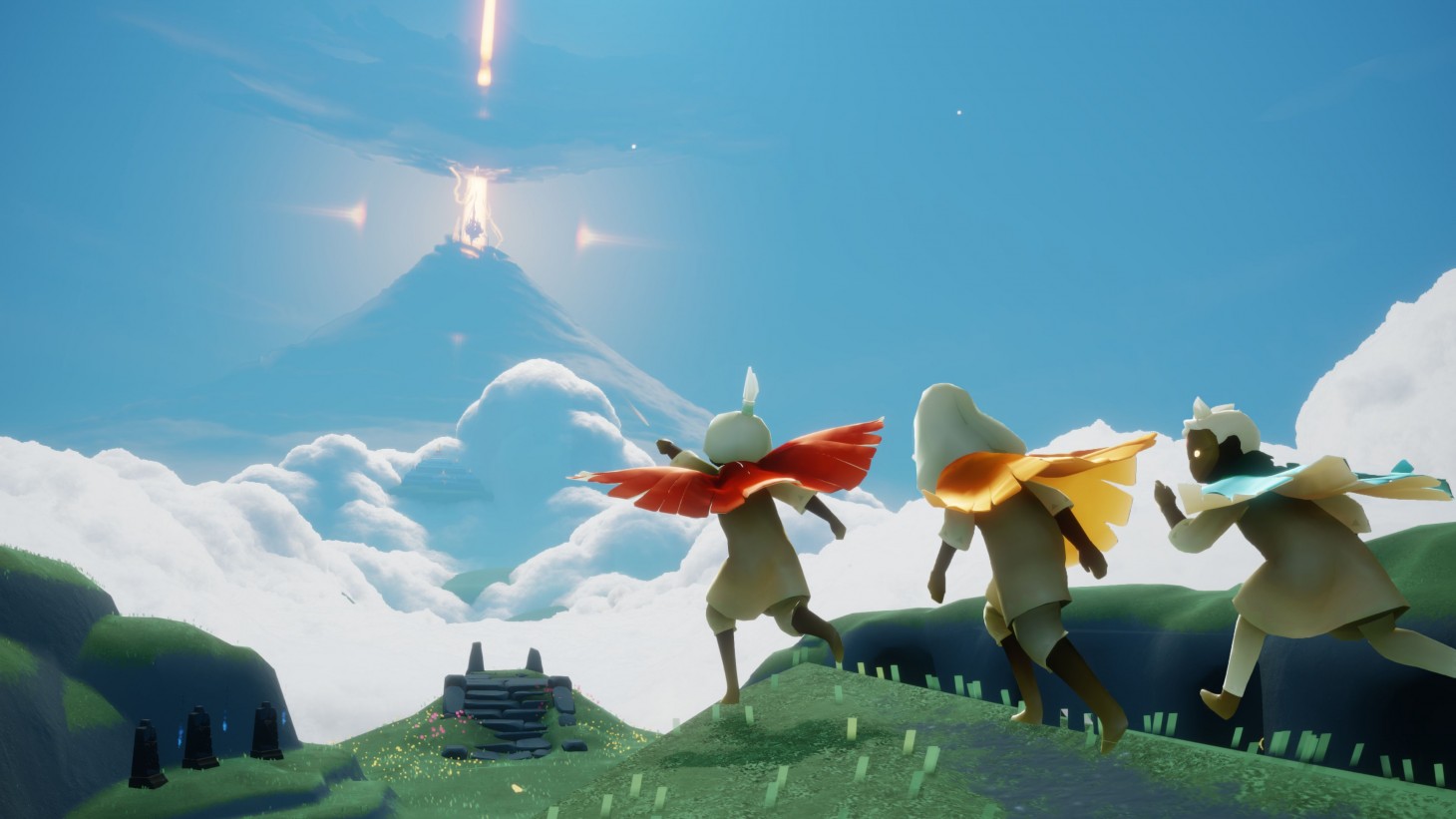 Sky: Children of the Light is a deeper experience, both figuratively and literally, than it first appears to be. Sky directly echoes many of the beats and gameplay moments that defined Journey, thatgamecompany’s last major release. But where Journey flirted with social elements, Sky is a full-on love affair with cooperative multiplayer. Early hours suggest a contemplative and accessible trip through an ethereal land of whirling clouds and distant horizons. While Sky can undoubtedly offer a thoughtful solo adventure akin to the studio’s previous work, it’s through engagement with friends and strangers that it becomes far more involved. Shaped by both mechanics and storytelling, it becomes a game about sacrifice, sharing, and the nature of altruism.

As one of the titular children of light, you are born into a world of interconnected realms linked beneath the same starry sky, and you must find ancestral spirits in order to return them to their rightful place in the constellations. By skipping across meadows, sliding down dunes, and soaring through open skies, you complete your task by bringing light to darkened places, kindling braziers and ancient bell towers with the touch of your candle. Gameplay is freeform and uncomplicated, and puzzles are often as simple as connecting the dots from one point to another. Lost spirits/stars are frequently hidden, so keen observation is required. Your life, light, and flight power are all encompassed in one shared statistic known as winged light, and it grows stronger as you find more of the lost. The sense of progression is satisfying, but the need to divert and collect new wing segments sometimes distracts from the natural flow of play.

Each of seven different realms offers a distinct visual and gameplay experience. The pastoral Daylight Prairie, with its inviting green fields and cumulus clouds, gives way to the rain-soaked Hidden Forest, which steals your light if you don’t find cover. Moving between the shifting landscapes is satisfying and well-paced; the music and environments together paint a potent mental and emotional scene. The most impressive magic on each stage is how much is hidden away, waiting to be discovered on subsequent playthroughs; greater flight power and the presence of friends opens up entirely new areas to ascend through and explore, lending a satisfying sense of mastery.

Whether you invite friends or meet up with strangers, Sky is a social game fueled by positive interactions. Dozens of emotive expressions unlock as you meet new NPC spirits, but the most popular within the burgeoning community are ones like “hug” or “high five.” Players are encouraged to share light and hearts to new friends, boosting their progress to new cosmetics. Musical instruments and sheet music can be acquired, to pause from the action and play together. Up to eight players can hold hands and leap into the sky together, guided by a single leader to discover new destinations – an ideal way to share the game with a child or less-experienced player. Some non-critical-path doorways and tasks in the world require multiple players to unlock, encouraging shared exploration. I really enjoy playing with friends, and I’ve had some magical moments meeting strangers in the wild and working to solve a problem. I only wish the direct invite functionality was a bit more straightforward instead of a strange QR code system.

Thatgamecompany makes a valiant attempt to wrangle the touch screen into a usable twin-stick setup for 3D navigation in air and on ground, but it's only successful for simple tasks. More precise movement, platforming, and flight challenges don’t fare as well; I often struggled against the controls, or fell off a narrow ledge when I thought I was standing still. This interface is by no means a dealbreaker, but it can lead to moments of frustration in an otherwise idyllic game.

As free-to-play games go, Sky is far less predatory or immersion-breaking than many competitors on iOS, but it still has an in-game store that can speed your acquisition of new items. Amassing that same currency in-game can be slow, but faster if you choose to share light with friends, and they with you. Sky is built as a living game, and the hauntingly beautiful conclusion leads naturally into endless potential replays. If that replay is appealing, the developer has seasonal content planned, with new spirits to find and items to earn, which will also come at an additional price.

Sky expands on the successful gameplay ideas of the developer’s previous games, but with a greater sense of progression, replayability, and a far more involved social component. Conceptually, this new project is a deeply felt meditation on empathy and the connections between people, couched in the same unpretentious and thoughtful presentation we’ve come to expect from the studio. Sky is a refreshingly moving and robust game on the iOS platform, and one best shared with others – especially folks who might not normally pick up a video game. 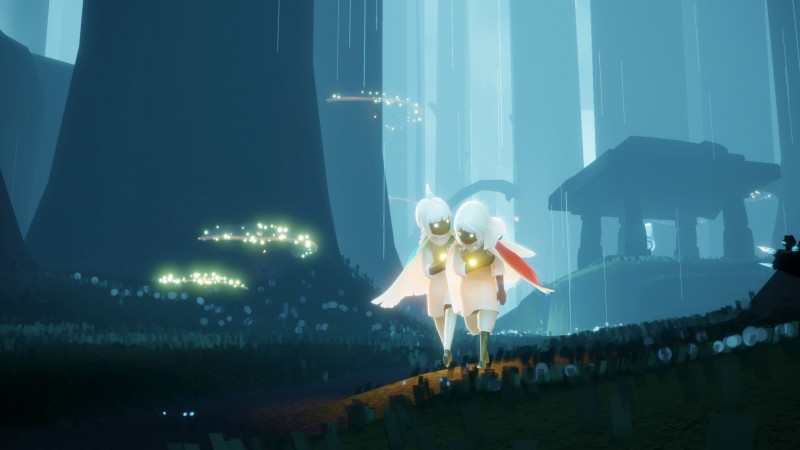 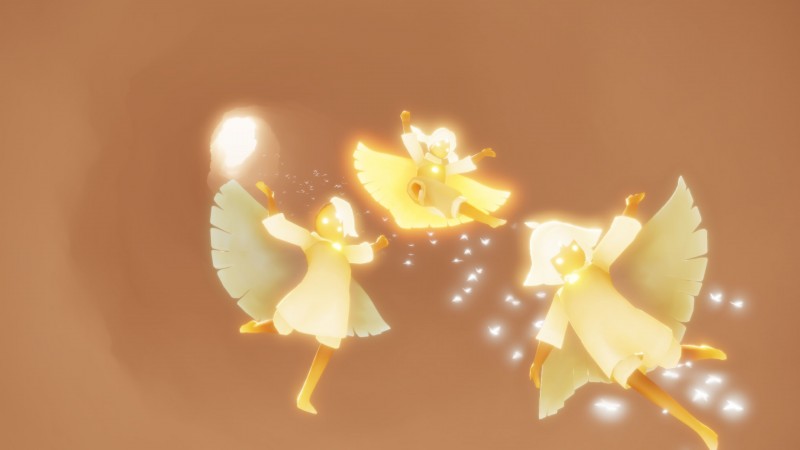 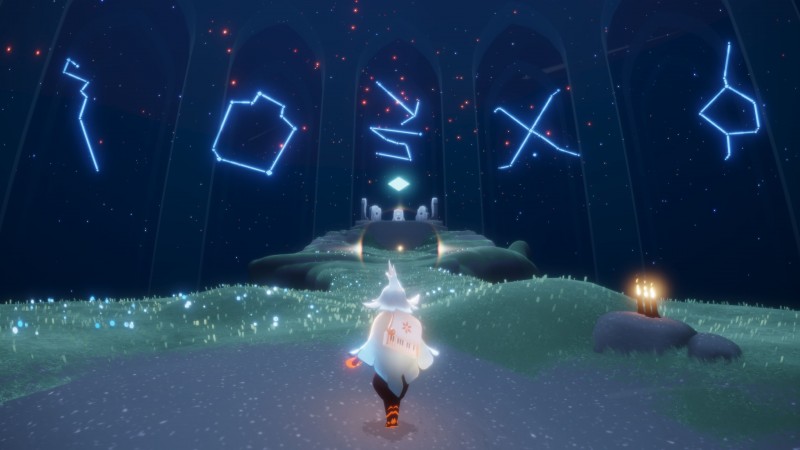 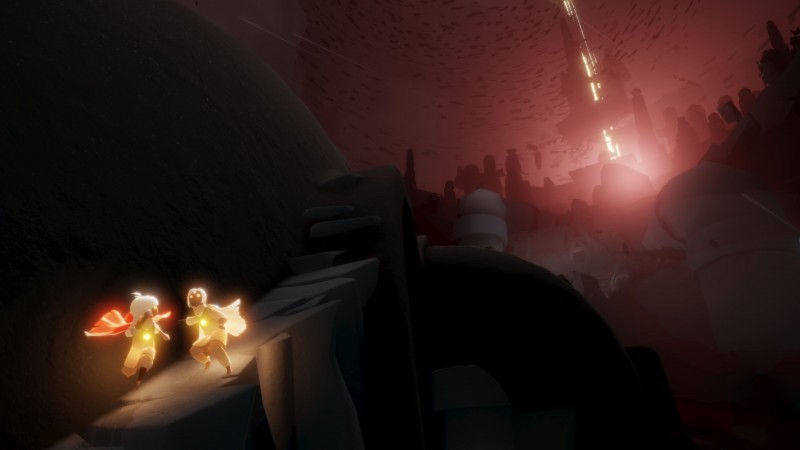 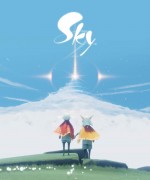 The new game from the makers of Journey is a thoughtful contemplation on positive interactions with friends, strangers, and the wider world.

8.5
i
Game Informer's Review System
Concept Fly through the clouds of a gorgeous world while making friends to soar by your side in this follow-up to Journey
Graphics Swirling clouds, distant light beams, and the ruins of a lost civilization are all depicted in a soft and inviting art style, but occasional hitching on some supported devices can break the illusion
Sound A stellar score ebbs and flows with the beats of onscreen events, while ambient sound effects add a naturalistic and meditative vibe
Playability Challenges in touch-screen control mar an otherwise accessible experience that features a smooth curve of new ideas and difficulty
Entertainment thatgamecompany’s eye for aesthetic beauty and meaning-laden interactions are made richer through social engagement and sharing with friends
Replay High