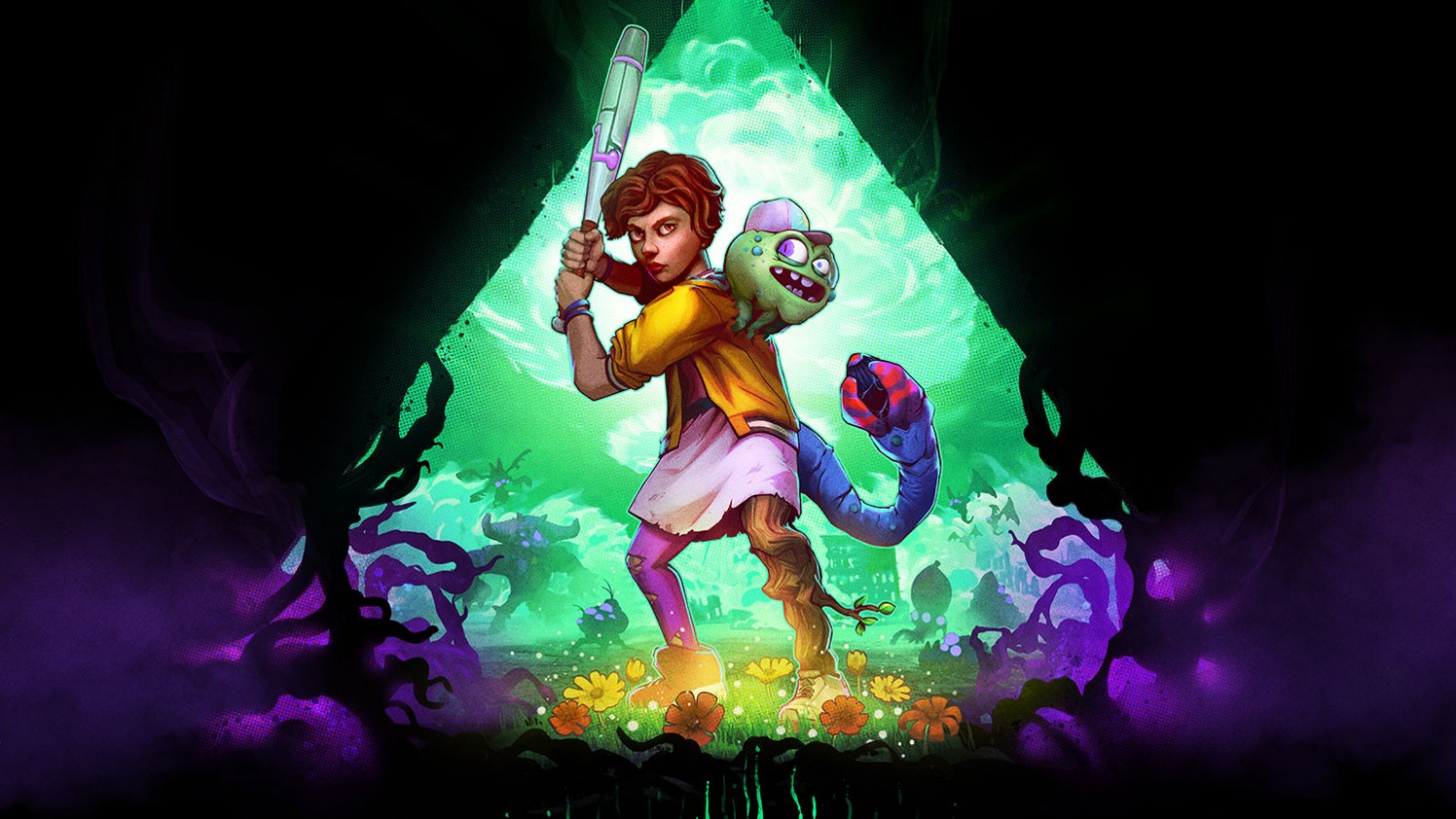 Exciting Abilities With Random Frustrations
by Kyle Hilliard on Aug 16, 2019 at 09:14 AM

Rad is a rogue-like taking place in a world that has suffered two apocalypses thanks to mistakes made by The Ancients and additional follow-up mistakes by The Menders (who only made things worse). As a teenager growing up in the post-post-apocalypse, the burden falls on you to explore the procedurally generated wasteland and bring life back to the world. Sometimes it goes well, and you get all the best mutations to help you complete your mission. Sometimes you sprout useless wings, take damage from health items, you lose all your currency, and you wonder what you’re doing with your life.

Highs and lows like this are typical of the rogue-like genre, and in many ways Rad sticks close to the rogue script, but it does manage to set itself apart with its leveling mechanics. Combat takes place from an overhead perspective, with the action playing out as a cross between a melee action game and a twin-stick shooter. As you defeat enemies, you build up experience that eventually causes you to mutate. These Exo Mutations are all unique, and even after successful runs and plenty of hours, I still saw new ones. You might sprout a cobra head and be able to perform venomous long-distance strikes. You might gain a tail that lets you lay eggs that birth helpful spiders. The mutations change your appearance and your approach to combat, and you can earn three on a single playthrough, so the combinations go a long way in making each run feel different. I was always excited to see what mutation I was going to get, but some (like the wings mentioned above) are a sign that the current run is a lost cause, which is a bummer.

Along with the Exo Mutations, you also find Endo Mutations, which offer significant passive boosts like imperviousness to fire, faster running speed, or one that makes your long-distance mutations (like a boomerang arm) fly farther. You don’t know what they will be until you activate them and they’re automatically equipped. Coming across these Endo Mutations is also exciting, but sometimes it doesn’t seem to take your loadout into account. Gaining the ability to throw long-distance attacks farther is great, but if your random mutations are all close-range, it feels like a waste.

You can also come across negative Endo Mutations, which is an interesting idea, but they’re all so damning that I learned to avoid them at all costs, even with the chance of getting something good. One I came across turned my screen orange making it harder to distinguish items and enemies and just generally made everything look bad. That mutation was active the first time I made it to the final boss, so I didn’t even get to see what it really looked like until I got there again on another run. When the negative outweighs the positive so heavily, it discourages you from rolling the dice at all.

I like the look and sound of the world, but the layout can sometimes be frustrating, thanks to the procedural generation. Underground hallways filled with enemies sometimes turn into boring dead ends without rewards, and above ground, necessary switches might be difficult to find or reach. The later stages are particularly labyrinthian; I had one run where I killed every enemy and was just trying to find the exit while outrunning frequent lightning strikes, which eventually caught up with me and killed me. It just felt unfair. I never ran into game-breaking procedural generation, but the annoyances were enough to make me pine for hand-crafted levels.

One random element I enjoyed was the world-building. Occasionally, as you find new items or areas, a young woman’s voice narrates a random snippet describing what you found, giving you little factoids about what happened and who the various survivors you run into are. These little story moments are short and sweet and don’t interrupt gameplay, but they make the world of Rad feel like a real place with history.

The rogue-like is a difficult genre to nail as it relies on balancing challenging action and myriad random elements. The trick is making sure the frustration meter isn’t higher than the fun meter, and Rad generally walks that line well. I certainly had my attempts where I felt like the game was working against me, but when I had a good run with mutations that worked well with my playstyle, I enjoyed myself and was thoroughly proud of my accomplishments. 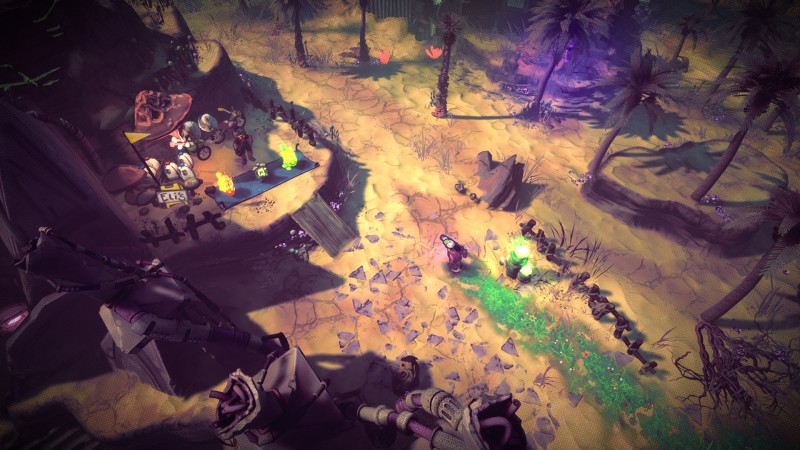 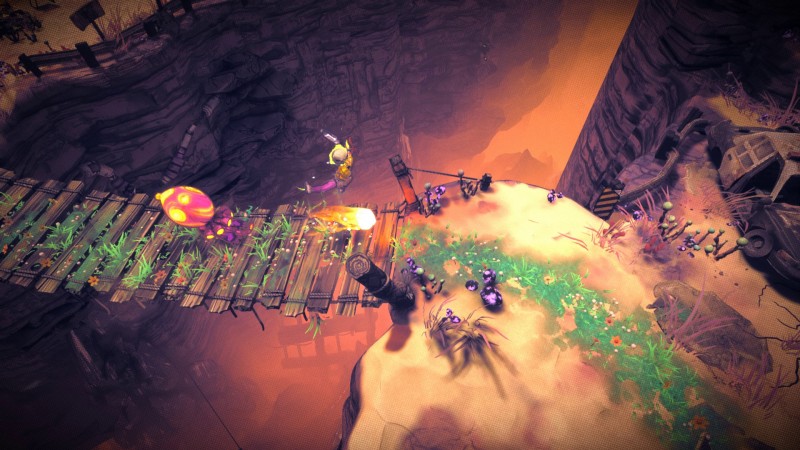 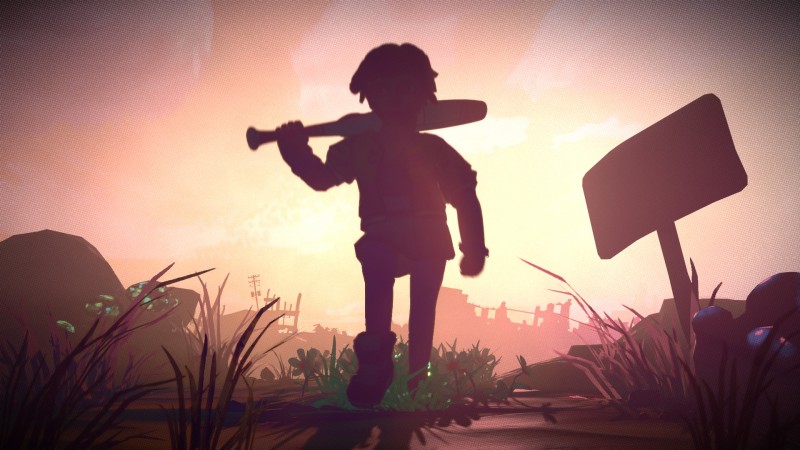 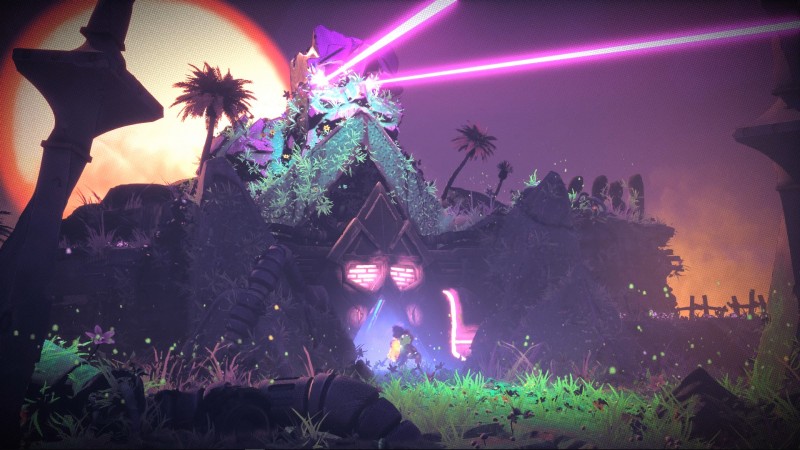 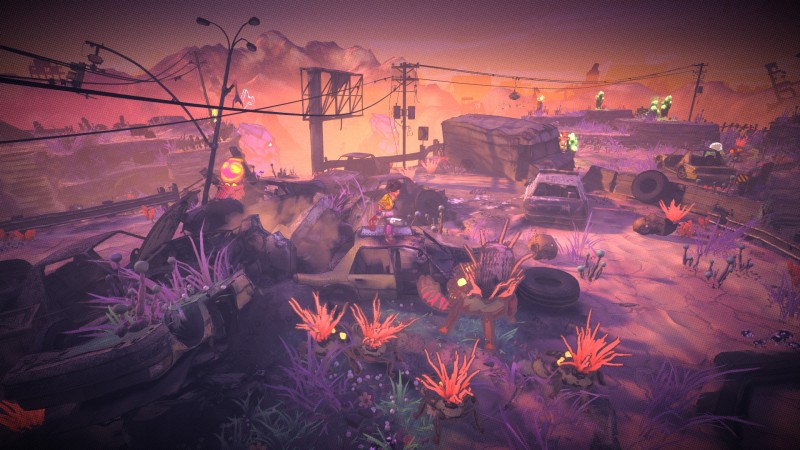 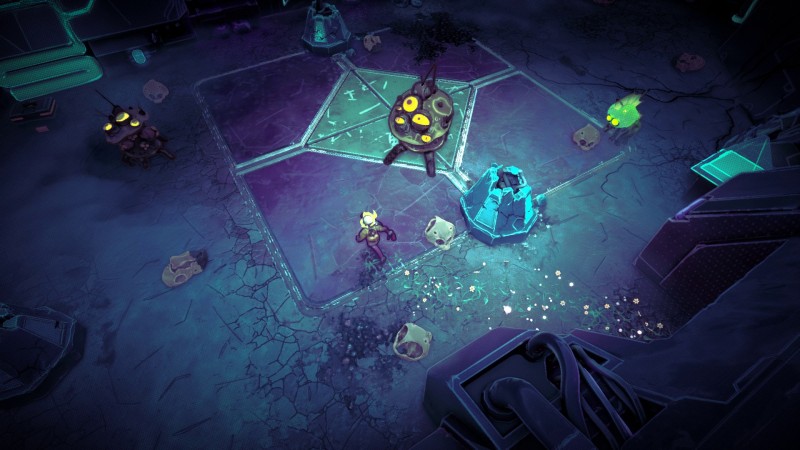 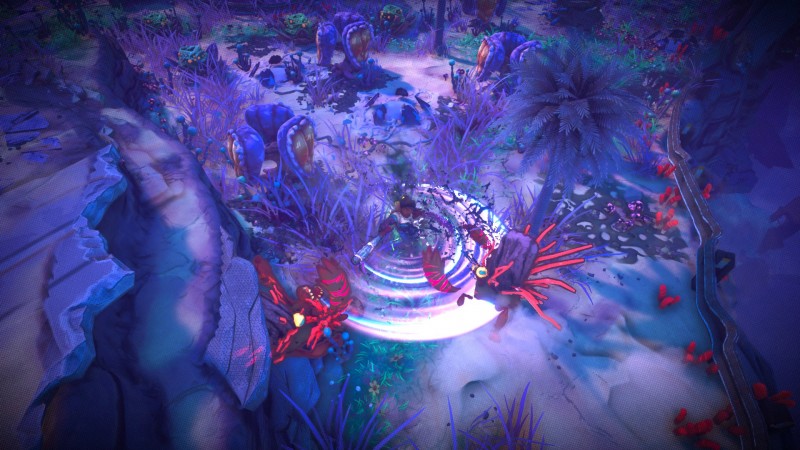 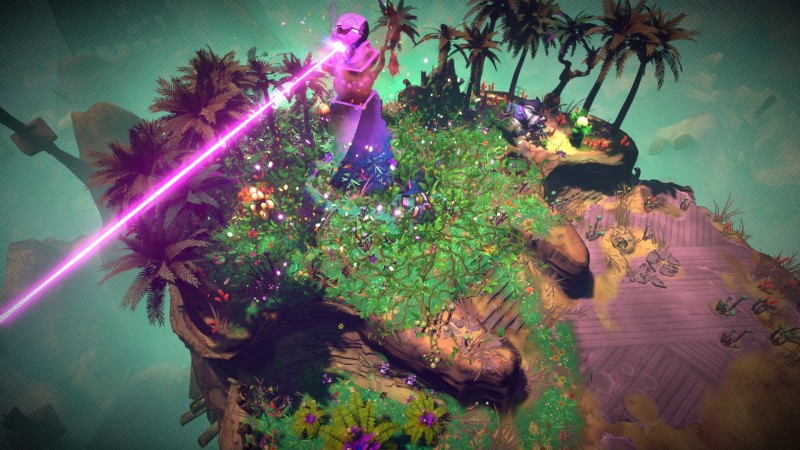 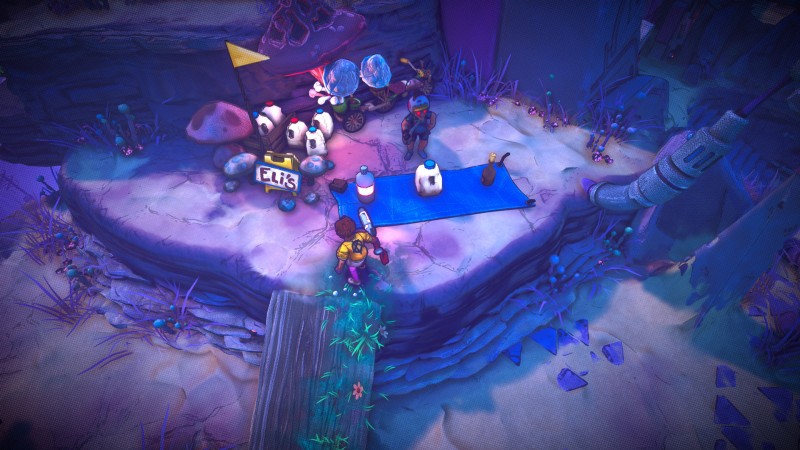 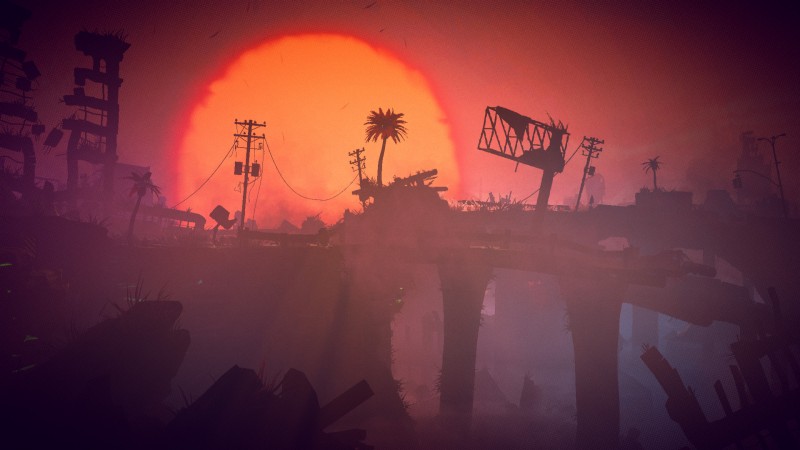 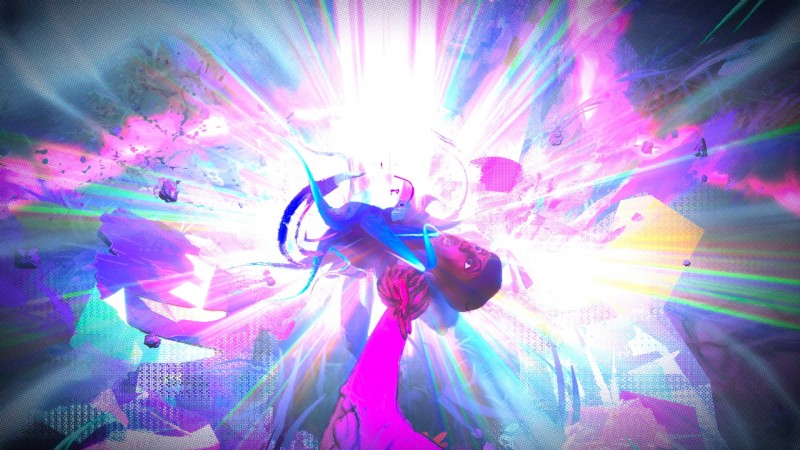 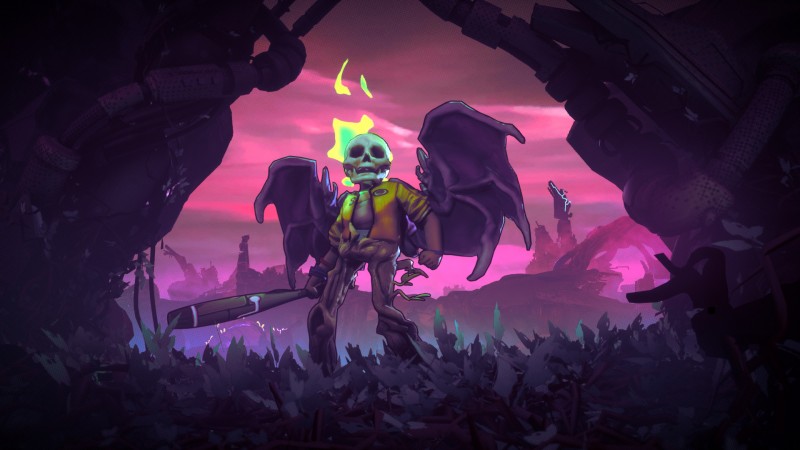 Off
7.25
About Game Informer's review system
Concept
Explore a rogue-like post-post-apocalypse while earning game-changing mutations as you defeat enemies and explore
Graphics
The neon-drenched setting is an enticing, overgrown apocalypse obsessed with ‘80s arcade culture
Sound
The music all sounds like synthy ‘80s songs and it’s great. The infrequent voice announcing various achievements is charming without being obnoxious
Playability
The twin-stick and melee controls work well, though slowdown during rain makes dealing with lots of enemies unnecessarily difficult
Entertainment
Frustrations related to random abilities and level layout can be annoying, but the overall aesthetic is inviting. Successfully completing a run is always an exciting achievement
Replay
High 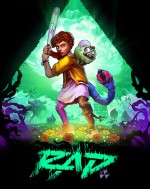