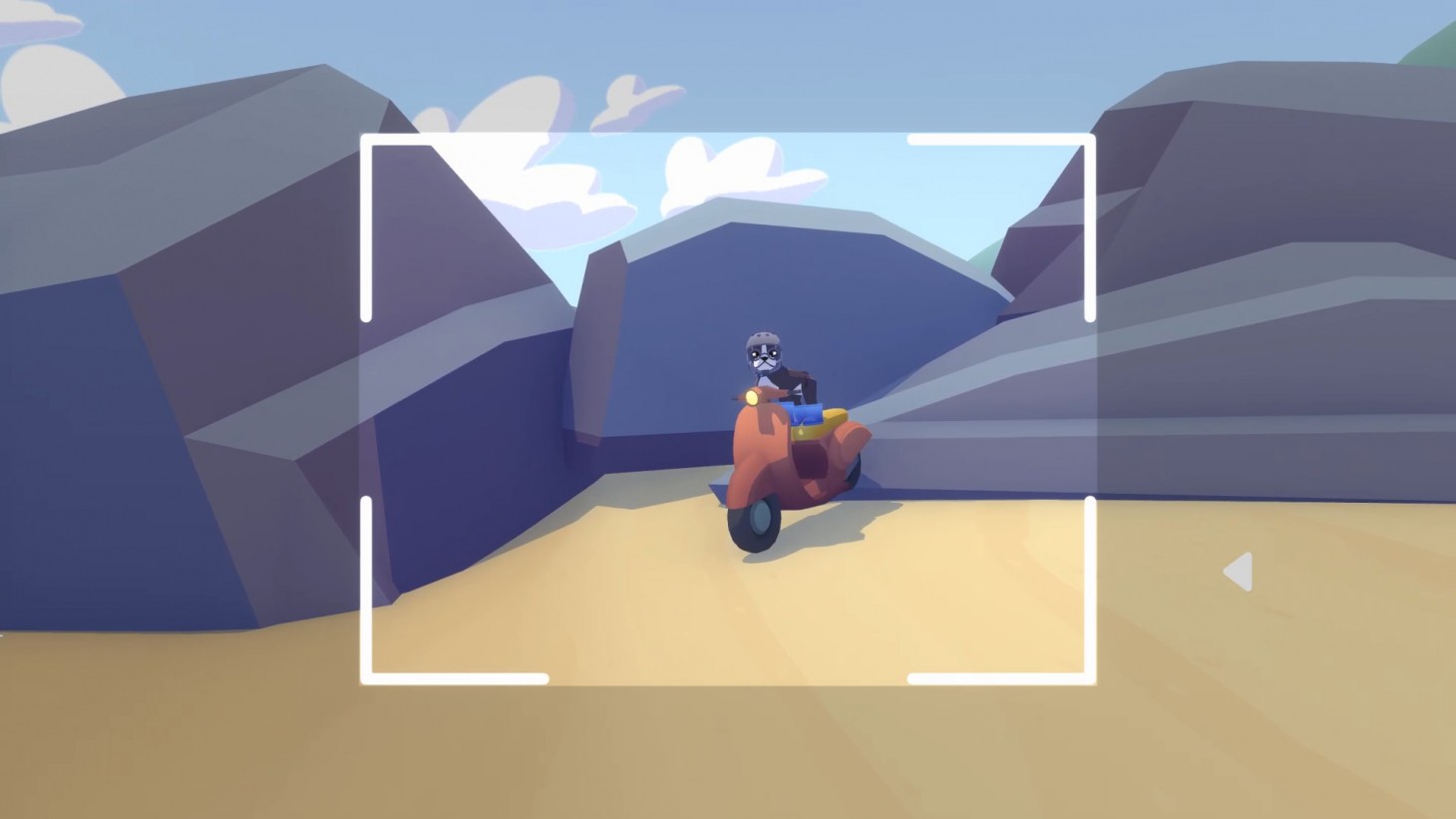 Pupperazzi is the gaming equivalent of cotton candy. It’s sweet and makes the day feel more festive, but it’s not going to tide you over if you’re looking for something with real substance. Smartly, the game doesn’t take itself too seriously, leaning into the playfully absurd concept of becoming a leading member of the puppy paparazzi with chuckle-inducing tasks, lively levels, and plenty of chances to pet virtual pooches.

Developer Sundae Month doesn’t try to explain Pupperazzi’s conceit. You are a humanoid camera (whose stretchy arms and ungainly shadow are either silly or the stuff of nightmares depending on how you look at it). From the start, your goal is to become the best dog photographer you can be in a world dominated by frolicking puppies. It’s that simple. Pupperazzi knows what it is, and instead of being bogged down by an exposition-heavy beginning, the game lets me jump right into the fun, photo-taking action. 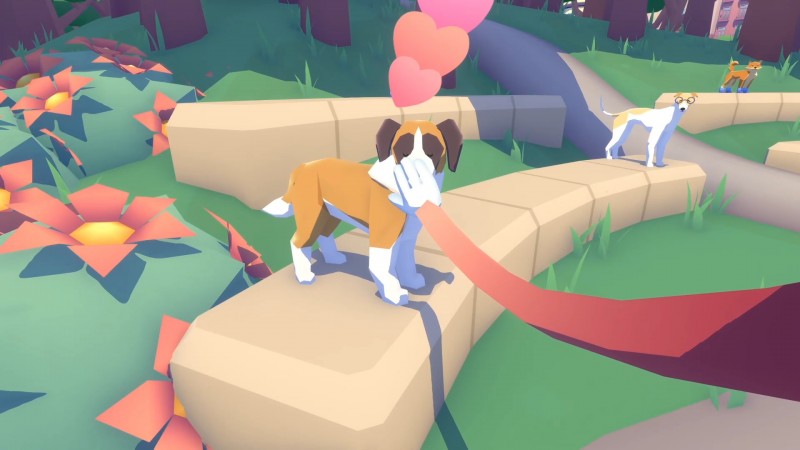 My first job, as explained by an authoritative canine in rain gear, is to build my notoriety by completing objectives. Rather than getting tasks from NPCs, you find a log of photo-centric to-dos in the menu. Many requests are breezy and humorous, like one from a game dev requesting a picture of a dog on a bike with a pixel lens because they don’t know how to draw a bike and need it for reference.

Completing objectives nets rewards, like bone-shaped currency to buy better equipment and more followers – which marks your progress like experience points might in another game. Gaining followers also means opening up more areas to explore. These challenges did a good job pointing me towards things to see or do in each level and motivated me to upgrade my gear. Pupperazzi’s menu-based objectives are important because there isn’t a lot of direction in the gameplay. There are no characters or overarching narratives to move you along, which might have been more engaging, but the requests give players an adequate reason to explore the landscape and get snapshots of adorable puppies. 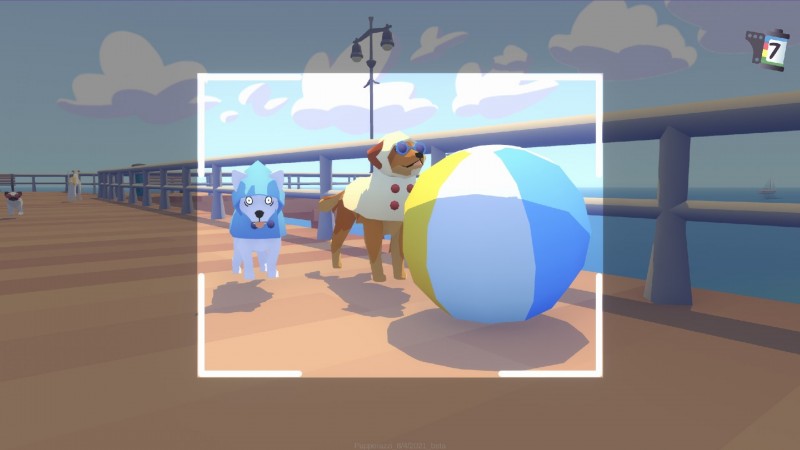 The photography controls are intuitive; simply hit the left trigger to bring up the camera and the right trigger to snap a photo. Once I captured that perfect moody, black-and-white shot of a dalmatian sporting a dramatic collar in my objectives list, I checked to see if it satisfied my client to claim my prize. I also picked up more followers by posting my picture to the game’s social media site, dogNET. NPCs share feedback and may follow you if they enjoy the subject, helping unlock new levels. Attempting to appease the whim of these armchair photographers adds a much-needed layer to the game, which might otherwise feel boring with how little happens from moment to moment. 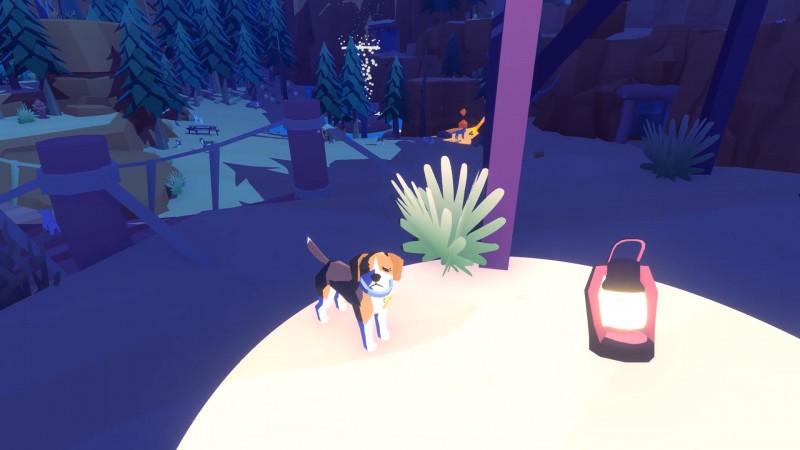 Pupperazzi doesn’t completely avoid pitfalls. I spent a lot of time in menus, and the game doesn't always clearly convey things. For example, the game doesn’t indicate when a photo meets the requirements for your current goals. I had to constantly bring up the menu after every shot to see if I could claim a reward.

On top of that, I need to check the menu just to see what my objectives were for each area or if I want to access dogNET. This all leads to a lot of flipping through tabs rather than photographing fuzzy creatures. I also found it a little off-putting that a message popped up warning me my photos might not be saved every time I want to move to the next zone. This left me confused and hesitant about what to do the first time I tried to leave the beginning level. However, after waiting longer than I’m prepared to admit, I took the risk, left the level, and discovered my photos were just fine as I moved on to a new locale. 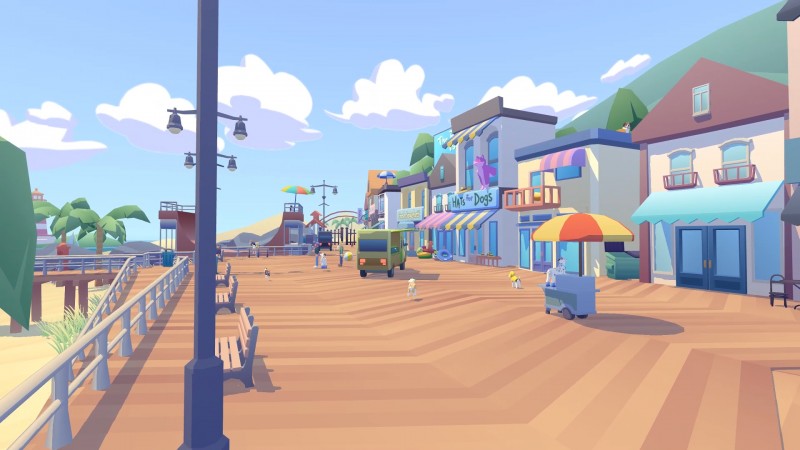 Getting to explore the vibrant and uniquely themed sandbox levels made up for the inconvenience. From Bubby Boardwalk, which boasts a skatepark and shuttered arcade, to the nature-filled paths of Mellowstone, each zone is a treat to explore. Different worlds have fresh objectives, hidden objects you can use to interact with your furry subjects, secret currency stashes, and vending machines to purchase equipment or items. I was also pleasantly surprised to discover a handful of optional platforming opportunities in various levels, like using awnings as trampolines to hop onto rooftops where more dogs were hanging out.

I rolled credits on Pupperazzi after a few hours, having completed almost all of the objectives in that time, and I have little reason to go back. However, my brief time was stuffed with lighthearted amusement, marred only slightly by a few annoyances. Its animated levels, playful attitude, and pleasing premise make Pupperazzi a wonderful game to jump into when you just want to escape and play with pretend puppies for a while.

On
On
Off
Off
7.25
About Game Informer's review system 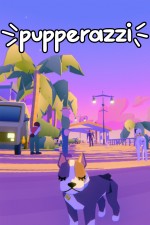