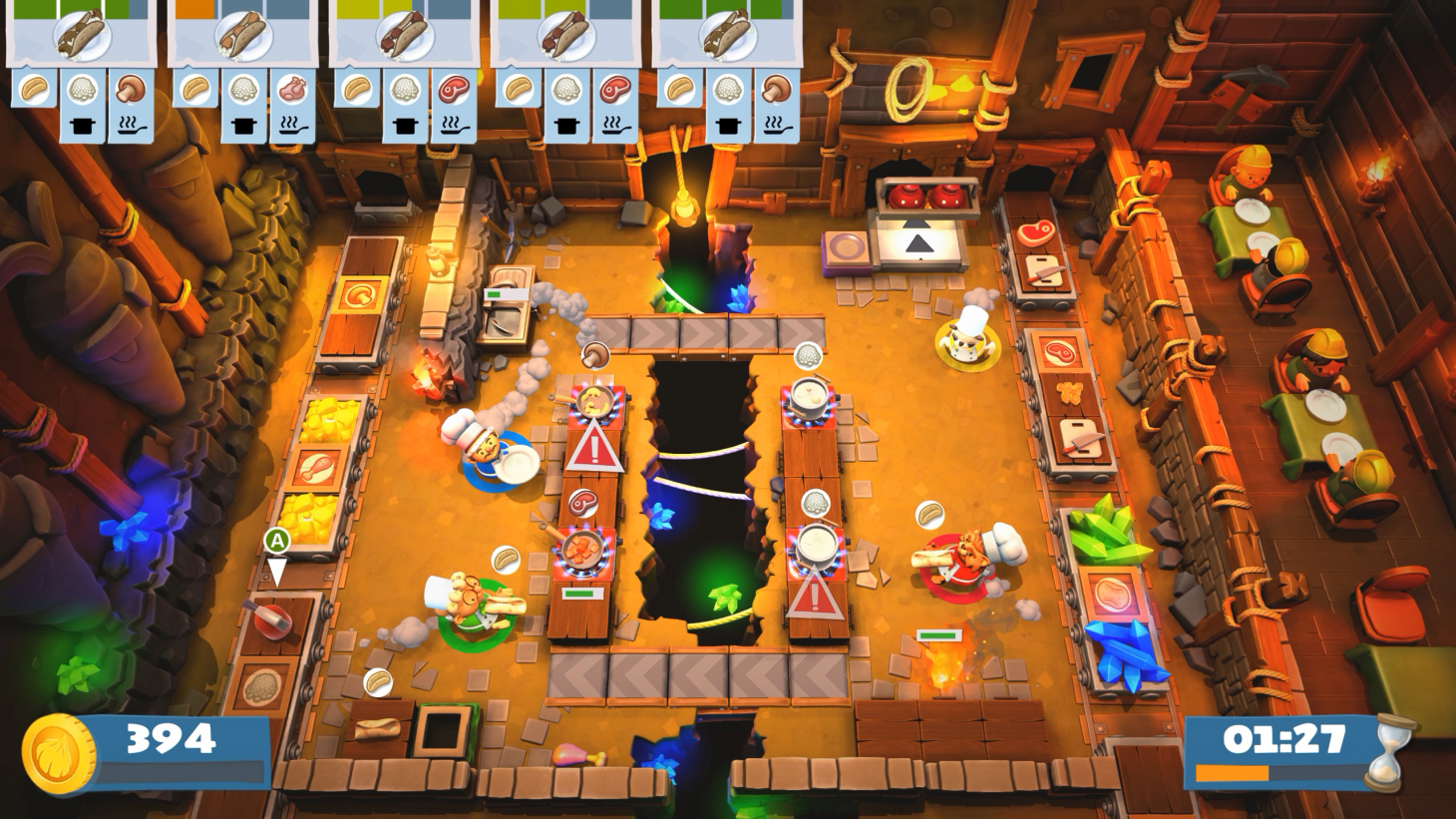 When we eat at restaurants, we assume the cooks in the kitchen are working diligently to prepare meals with the proper ingredients that have not been compromised in any way. If Overcooked 2 gives us a look at what these kitchens are truly like, you may want to fill your freezer with microwave meals. In a bid to speed up the cooking process in this sequel, food is thrown with reckless abandon, and most of it ends up on the floor for at least a few seconds. If the kitchen doesn’t catch fire, it’s likely located in a swamp filled with toxic waste, a library overrun with ghosts, or maybe even in a graveyard with mice serving as its chefs.

Overcooked 2 delivers the same four-player cooperative madness as its predecessor, pushing players to fetch ingredients, chop them up, assemble them on a plate, and then toss them in the oven – all before a customer gets up and leaves the establishment. Little has changed between the two entries, and that's perfectly fine given just how much fun the cooking is. The big alteration isn't to something you can outright see: This installment is less frustrating, as progress is made easier thanks to more forgiving scoring and level-gating. 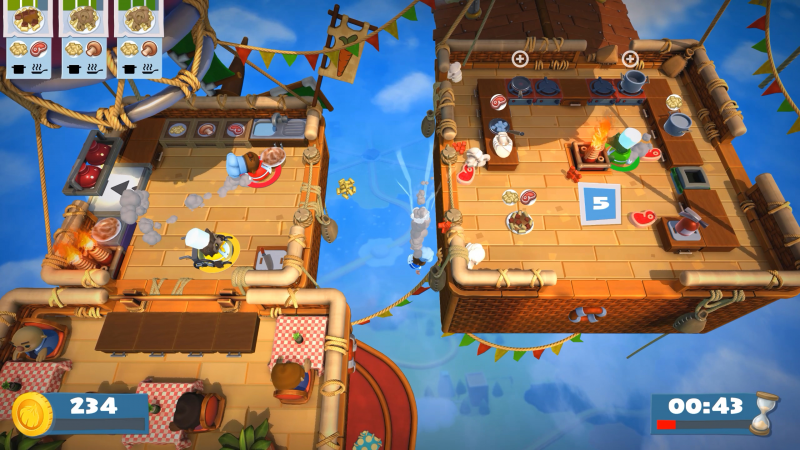 If your team finds a rhythm, two- and three-star ratings are fairly easy to secure in most stages. Never once did I have to return to previously completed stages just to farm more stars to unlock new levels. Hardly any of the stages delivered that sweat-inducing intensity of the first game. Rarely were we in the do-or-die position of one last dish leading to success or failure. This is both a good and bad thing, as the thrill of victory was never as large, but we also didn’t hang our heads in shame after failing numerous times. Sure, we had to replay a number of levels just to figure out their flow, but even our bad runs ended up netting us one or two stars. The difficulty appears to be designed more for a party atmosphere, where progress is constantly made, rather than pushing players to make every last second count, and every action perfect.

That’s not to say the cooking intensity has diminished. The kitchen designs and dishes that need to be whipped up are just as demanding, and push players to communicate incessantly to figure out who is doing what and which ingredients are needed to get a dish into the oven. The addition of being able to throw food either directly into the hands of another player or anywhere around them greatly speeds up the process. Some moments of failure also come from the throw maneuver, as an errant toss may send an egg directly into a dish that doesn’t need it. 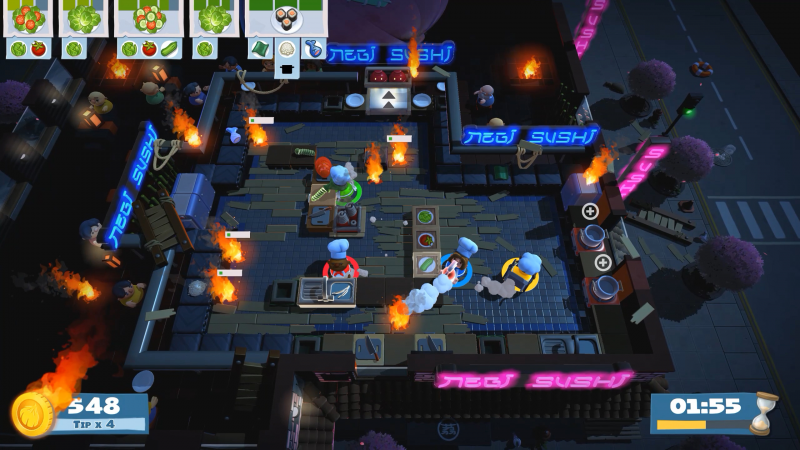 A typical day in the kitchen ranges from players scrambling to make two-ingredient meals like chicken and fries to the more complex pizzas that require four items. Keeping track of which orders are being worked on and which ingredients are required is where communication is key, and can frequently break down. We would sometimes accidentally add sausage to a cheese pizza or put too many bags of wheat into a mix. Some confusion also came from not knowing how to prepare dishes the first time. After fetching and chopping up a carrot, the player now needs to determine if it goes in the steamer, mixer, pan, or pot. Some kitchens feature all of the cooking options. Yes, given the lightening of the difficulty, the madness doesn’t matter as much, but it’s still a blast.

Being part of a group of players that are all barking orders and screaming chaos at each other is what the Overcooked series is all about. That happens again in the sequel, only you likely won’t want to fry up a friend who continues screwing up, since you’re still making steady progress. You also won’t run into boss fights this time, which is a bummer, as that was a cool way to conclude the first game. The lack of a foe makes the experience a little anticlimactic, but the thrill of cooking is great from start to finish.

Organizing play sessions is far easier now thanks to the addition of online play. As great as the couch co-op experience is, you can now play from your own home, and yes, yelling at each other still works well over the headset.

If your friends aren’t around, you can enter the public space to play in randomly selected stages, or throw down in competitive play. If you like versus battles with griefing, Overcooked 2 puts it front and center. You can steal away finished dishes the other team labored on, bump into cooks to knock them off the level, and throw food at them, which they may accidentally catch and place in a dish. Like the first Overcooked, none of the modes require four players. You can cook by yourself (which requires you to switch between two cooks), but this avenue of play obviously doesn’t deliver the same level of insanity.

The Overcooked series is similar to that restaurant that made a name for itself with one signature dish. Not much has changed between the original game and the sequel, but the recipe has been honed to reduce frustration and make it easier to chew.

On
On
Off
8
About Game Informer's review system
Concept
Frantic cooperative cooking that improves on the original with relaxed gating and scoring systems that make it easier to advance
Graphics
Level designs are quite clever. Ingredients pop off of the screen, but item requirement menus can be difficult to read when they overlap
Sound
An excellent score offers soothing melodies that match the environments and calm the nerves initially, but turn frenzied when the clock ticks down
Playability
Controls work flawlessly for any action, and the throw maneuver adds a nice element of strategy to the already-great gameplay package. Stages are sometimes designed with this move in mind, which both aids and hurts player efforts
Entertainment
With the eased restrictions on making progress, Overcooked 2 is designed for a party atmosphere rather than the first game’s nail-biting need for perfection
Replay
Moderately High 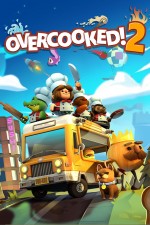