Thanos snapping his fingers to wipe out half of all life in the universe isn’t the only threat the Avengers face in Marvel Ultimate Alliance 3: The Black Order. As they race to stop the mad titan from gathering all of the Infinity Gems, their journey is periodically upended by laborious and uneventful level designs, technical issues, odd balancing, and a story that sacrifices heart and soul to continually introduce new characters and locations. Even though the heroes get pummeled by the game’s shortcomings, they still stand tall and deliver plenty of fun when combat intensifies.

Players begin by controlling the Guardians of the Galaxy. This rag-tag group does a nice job of illustrating the diversity in character powers and approaches. Star-Lord can fly around and rain down laser fire from high, while Gamora uses her sword to slice foes at close range. All of the characters control admirably, with the mobility you would expect from them. Whether you are playing single player or four-player co-op, the combat in these early moments is enjoyable and dynamic, pushing you to look for openings, communicate with other players to line up tag-team synergy attacks, and use evasive maneuvers to avoid area blasts and charge attacks. Since enemies often approach in great numbers, with grunts swarming the heroes and shielded adversaries hunkering down to deliver damage from the periphery, figuring out when to use the big "extreme" attacks is another aspect that is implemented well and ends up being quite rewarding given just how much one blast can change the flow of battle. 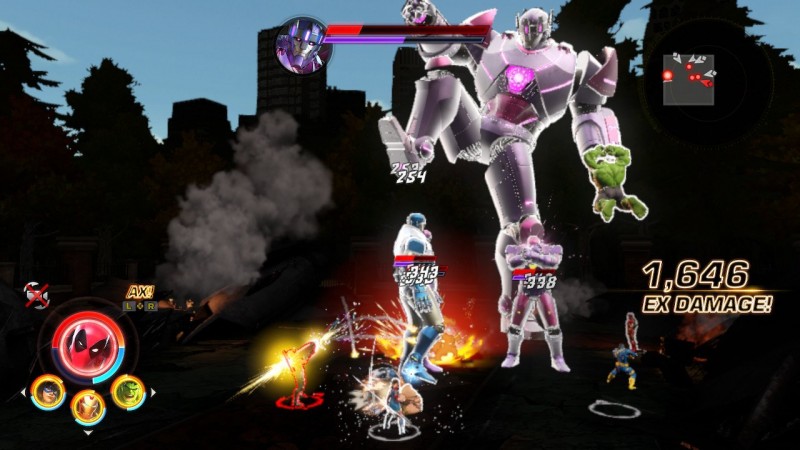 Combat is similar to the previous Ultimate Alliance games – you do a lot of jamming on the same attack buttons to keep waves of enemies at bay and use special powers strategically to thin their numbers. This simplicity works well, but just don't expect to see much destruction in the environments other than flying bodies. Whether you are in Avengers Tower or Wakanda’s wilderness, most of the environments are sterile, repetitive in architectural design, and hardly anything in them can be destroyed.

The lack of a connection developed to the world, both through gameplay and visually, hurts the experience more than I thought it would. Levels get repetitive fast, and the periodic puzzles that are thrown in to change up the pace are easy to solve and end up being annoying speed bumps that just halt progress. You mostly slog through bland areas until you reach a room that looks important and likely holds a new hero or villain.

If you thought Avengers: Endgame's hero roster was awesome in size, Ultimate Alliance 3's is even bigger, and thoroughly explores several sectors from Marvel's sprawling universe. The playable characters consist of over 30 well-known faces, and not just from the Avengers portfolio. The X-Men, Spider-Verse, Marvel Knights, and Midnight Sons are represented in big ways. Characters with no defined affiliation are also here and embraced fully. While Thanos and his Black Order fill the role of end-game bosses, other villains who line up with the hero reveals or worlds they traverse are also in great abundance. The best part of the game is seeing who will pop up next, even if it is for a brief cameo. The reveals are strong from start to finish.

Most of the characters are handled well, giving you a range of powers that fit their personas. The Hulk is the rampaging mess you would expect, Deadpool is a powerful goofball, and Nightcrawler is constantly “bamfing” all over the place. Some characters are a little phoned in, however. Doctor Strange basically has the same flame attack as Ghost Rider. Most of the hero abilities are brought to life with an array of particle effects and graphics – often too many. Just keeping track of where the characters are onscreen can be difficult, especially when the camera switches to distant perspectives (which makes handheld play a little rough at times). The camera can be a serious pain. 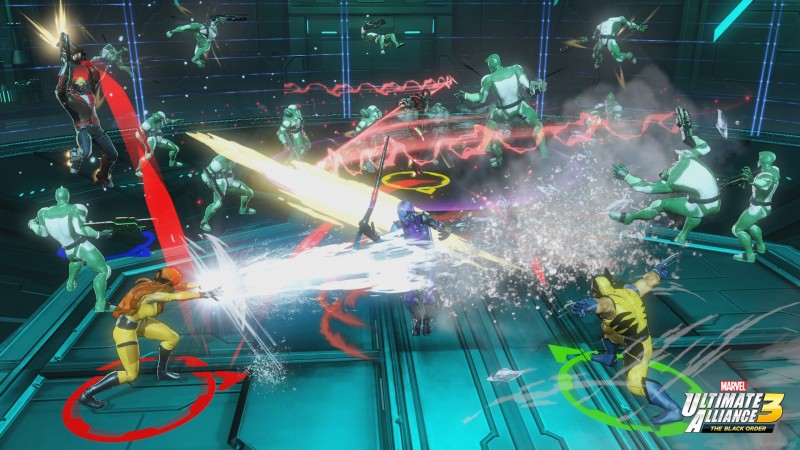 As joyous as the character reveals are, adding yet another face to your roster can be somewhat maddening given how difficulty is balanced. Within one level you may unlock a handful of characters to use. These new recruits are balanced to the particular environment, meaning Ghost Rider will be level 25 when you get him. You can immediately play as him, and he feels appropriately powerful. He also gains experience and continues leveling up. The hero you swapped out won’t gain anything, and the longer that character sits on the bench, the less likely they are to hold their own in the next battle. Considering the large number of playable characters that you have at your disposal, you just have to give up on some of them, since most of the roster ends up being under-leveled. You can't just say "I want to play Spider-Man" and expect that experience to be fun if he's level 8 in a level 30 zone. The alternative is to grind experience points for hours just to bring him back up to a viable power level.

Given how powerful bosses are, you're going to need four high-level characters as you progress through the uneventful story. These villains give you a good run for your money, and end up being the most enjoyable (and lengthy) battles in the game. Some of these bouts are damn fun. They push you to sync up attacks and be as evasive as you can.

Though you can replay levels, the fastest way to level up heroes is to give your character an immediate shot of XP from a cube, which you can find hidden in levels or earn by completing specific tasks like the Infinity Trials. Even though you stumble upon the trials as you work your way through the story, they kick you out to the title screen whenever you engage them. I don’t understand why my characters aren’t dropped back into the level, but it makes the game more hassle than it needs to be. The Trials don’t offer hardly any new content, and instead take you through previously completed boss battles and challenges with slightly different parameters and difficulties, such as only being able to use Captain America or every foe giving you a few seconds more on a clock that is counting down to zero. The challenges are also level-gated so you won't be able to play as low-level characters in most of them. The higher level trials reward you with new playable characters and a few costumes. 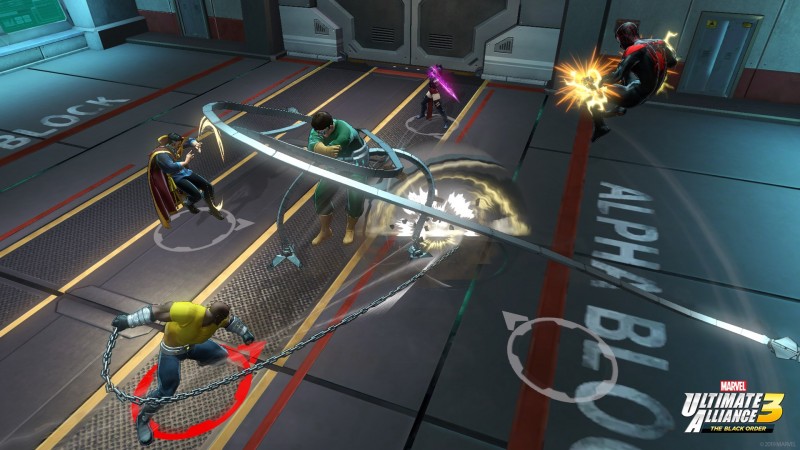 As oddly put together as the character leveling is, I applaud how ability progression, items, and alliance enhancement are handled. Equipping infinity shards (which can be powered up) is mighty slick, as is the sprawling alliance enhancement grid, which gives stat increases and bumps to the entire team – just not enough to help low-level characters.

My time with Marvel Ultimate Alliance 3 was filled with peaks and valleys. It has great moments where everything is clicking, followed by lulls where it all falls apart. The story never really gets going, however, but is a fun exploration of all things Marvel. For that, it delivers a little bit of fun, but this experience is all about the character reveals and getting to test them out, even if the worlds they explore and challenges within them often lack excitement.

On
On
Off
Off
7
About Game Informer's review system
Concept
A super-powered brawl that delivers an impressive number of characters, but stumbles with story, progression, and level designs
Graphics
The heroes and villains look like they were yanked right out of a comic book, and that’s a good thing. The environments are light on details and destructible objects
Sound
The score and character voices are all over the place. Some melodies are appropriately heroic, others sound like generic rock riffs. Some character voices are perfect, others sound forced
Playability
The controls work well and make characters feel powerful and true to who they are (with some exceptions)
Entertainment
The bland level designs and baffling character progression hold the action back and make it somewhat of a slog
Replay
Moderately High