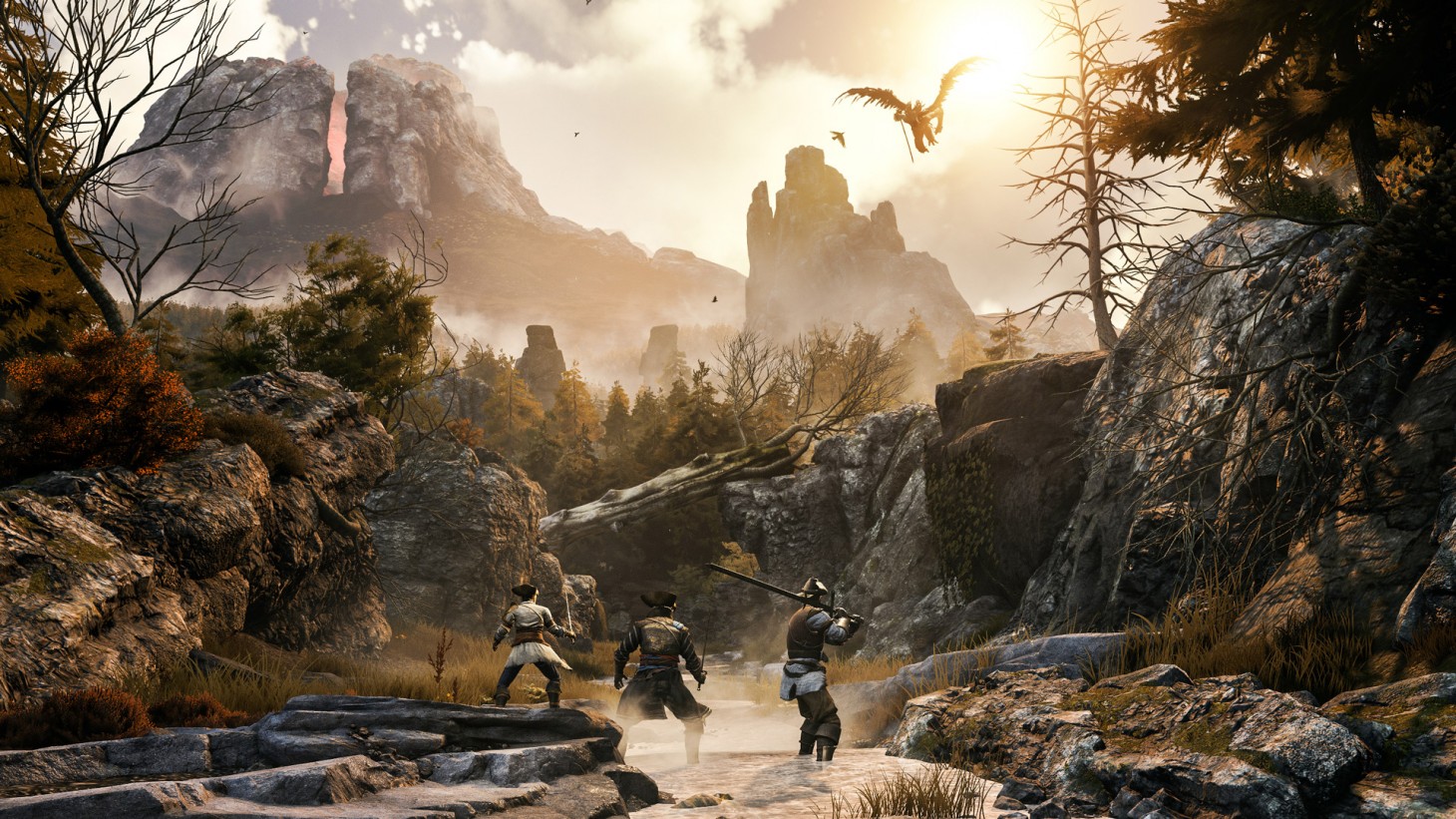 The enemy troops outnumber mine three to one. Defeat is inevitable, and we have our backs to the wall with no escape in sight. In a last-ditch plea, I convince their leader to at least have the honor of felling me with a sword, and we exchange metal. He’s no match for me and I gain the upper hand after a few well-placed strikes. My knife is now pressed firmly against his throat. I can set him free and try more diplomacy, but my best play may be spilling his blood to scare his troops into retreat.

This is a huge decision you are forced to make in GreedFall, a sprawling role-playing adventure that is grand in ambition, yet struggles to deliver it in polished ways. Set amid a beautiful backdrop that combines a beast-filled fantasy setting with architecture inspired by 17th-Century European baroque art, GreedFall delivers a unique vibe, and it strives to make the player feel like they have a say in almost every event that unfolds. Player choices are handled exceptionally well, both in terms of how they affect the flow of the story and in pushing the player to sculpt their character with talents needed to enable more choice. 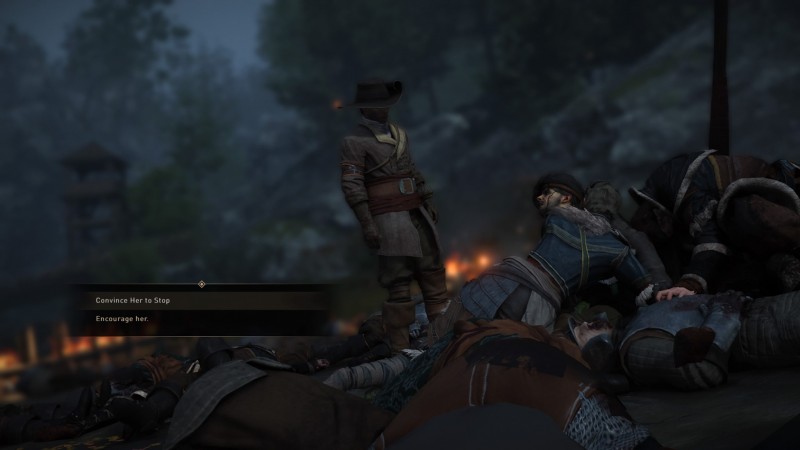 Some of the decisions are as black and white as “burn it down” or “leave it be,” but most require talent rolls, such as having the charisma to bend someone’s will. Developer Spiders’ delivers these talent rolls frequently, and they usually bring immediate benefits, even to world exploration. You need to invest in lockpicking to open doors and chests, agility and strength to wield specific weapons, willpower to harness the power of amulets, science to make bombs, and vigor to have the ability to balance, jump further, and climb specific surfaces. Every level gained makes your character more interesting and dynamic. Spiders does a phenomenal job with the RPG systems, which are deep, meaningful, and include scaling your character to equip better and rarer gear.

Carefully chosen player choice even extends to the companions you bring along, as the faction they support may be at odds with the NPC you are conversing with, and, without notice, your cohort could escalate a situation. Much like BioWare’s games of old, you can get to know your companions and increase your standing with them just by talking to them, complete with unique quests further the relationship. And yes, romancing them is an option. I like how my relationship with Aphra progressed and concluded, but I can’t speak to how the other romances unfold. 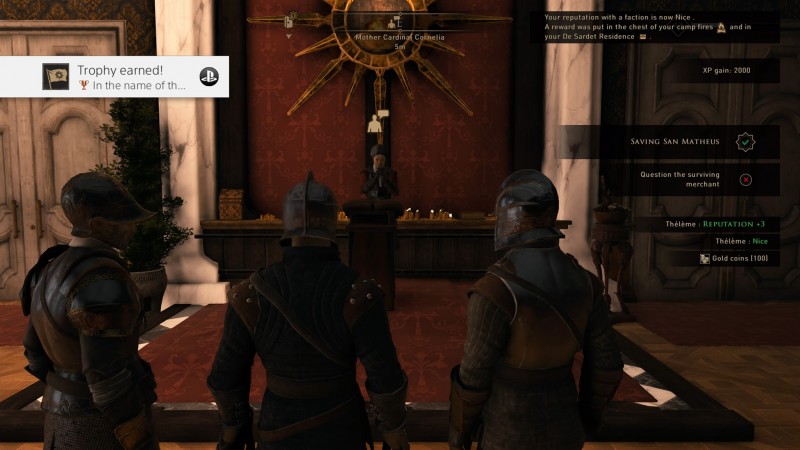 GreedFall’s world is broken up into sizable hubs that are nicely designed, and deliver plenty to explore if the player chooses to veer off of the beaten path. Chests are littered everywhere, as are side quests. As much fun as it is to uncover more of Teer Fradee, that means you have to engage in combat – GreedFall’s troubled Achilles heel. Not only are enemy types lacking (you battle the Valieg over and over), but encounters frequently glitch out, leading to strange stalemates. Most battles take place in open areas, giving you plenty of room to spread out and evade enemy attacks, as many will charge you. If you happen to pull an enemy too far from their starting point (and it could just be 10 feet in a specific direction), they lose track of you, walk slowly back to their default position, and gain all of their health back. For whatever reason, each encounter is set within a ring, but the player has no visual way to know where the boundaries are, making battles maddening at times.

Spiders did a nice job with the combat mechanics – swinging melee weapons and casting spells feels great, but the enemy rarely puts up a decent fight. Most of their attacks are far too easy to read, meaning you can dodge or parry them with ease. I found my character was far too powerful for the second half of the game, just from undertaking roughly 30 to 40 percent of the side quests and activities. Combat is something GreedFall desperately needed to get right, given just how heavily quests often just consist of conversations and exploration, but it ends up being the worst part of the game.

Many of the quests are fairly vanilla in design, but are lifted up by strong writing, which sometimes moves into the realm of mini-stories used to flesh out characters or the world. The central arc of four factions warring over a cure for the Malichor disease goes places and is nicely told. I especially like the quests that are formatted like mysteries that push the player to search areas to unearth clues and communicate with witnesses to piece stories together. That said, it takes a fair bit of imagination to bring some of the tales to life since they mostly unfold through emotionless (and mostly animationless) characters. Some big story beats are scripted well, but most of this experience is just talking heads. Again, the stories GreedFall tells are quite good, but the production values are lacking.

GreedFall’s stories, world, and wealth of choices are fun to explore and can legitimately be great at times, but the problematic combat, reliance on conversation for quests, and lack of polish over everything hold it back, but Spiders is on to something and isn’t far off from having its first truly notable RPG. Much like Bethesda’s early Elder Scrolls titles and CD Projekt Red’s first Witcher game, GreedFall feels like it’s the beginning of something great, but it just isn’t quite there.

On
On
Off
Off
7.25
About Game Informer's review system
Concept
An action/RPG that delivers meaningful player choice for the story and character building, but struggles with polish and execution
Graphics
GreedFall’s environments are nicely detailed. The cityscapes are fascinating, even if interiors are repeated too often
Sound
Olivier Deriviere’s soundtrack is the best part of this experience. Combat encounters begin with a quiet rumble and eventually turn into a ruckus. Character voices are decent as a whole
Playability
Hack-and-slash melee and spellcasting feel good. Enemy encounters don’t offer enough variety. Fights can reset if you move too far in one direction in the open world
Entertainment
GreedFall’s writing is solid, and the player choice is fun to engage in, but the game needs polish and more meaningful action
Replay
Moderately High