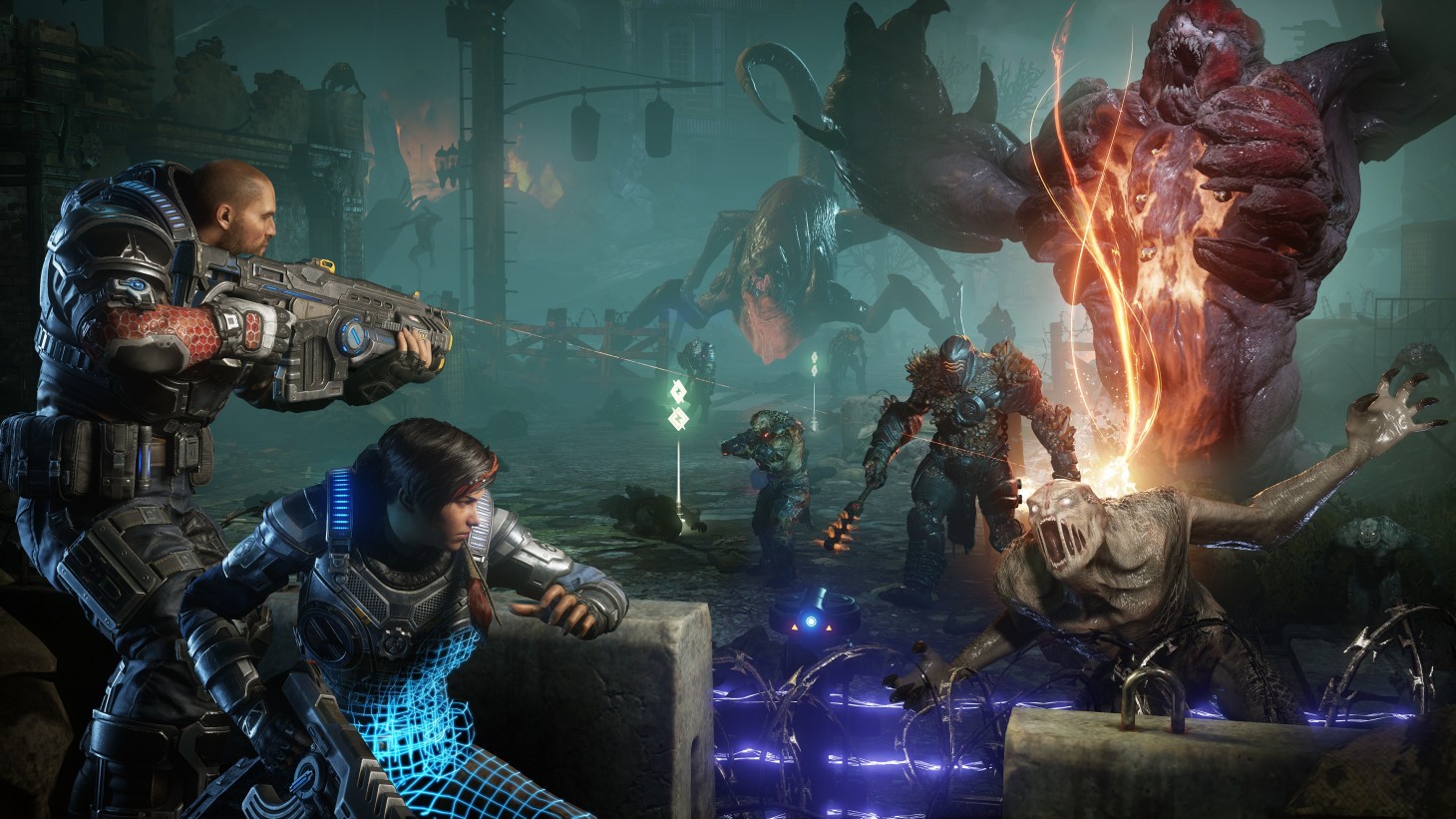 The Gears of War series has been uncompromising in its apocalyptic vision, holding the line with the same cover-based shooting, gruff armor-clad heroes, and wealth of multiplayer modes in all of its installments. You know exactly what you are getting from each game, and that’s a great thing. Gears 5 continues this tradition, and is every bit as fun as it is familiar. The gunplay feels somewhat antiquated, especially when the Lancer’s chainsaw roars to life again, but that doesn’t stop The Coalition from delivering some of the series’ biggest and most intense firefights. When the conflicts escalate, look out – Gears has never been better.

This is The Coalition’s second tour of duty with the Gears license, and the developer shows savviness with both the lore and gunplay, dazzling with the latter in bombastic ways – especially in the final act, which is relentless in its pacing and action. The Coalition also takes a few chances to expand Gears of War out of its comfort zone, and the results are mixed. Some ideas add strategic layers to combat, others bring the action to a screeching halt.

Gears 5 is a direct continuation of its predecessor; it doesn’t skip a beat in picking up the narrative thread that was teased at the end of Gears of War 4. Protagonist Kait Diaz’s dark secret was exposed, and now she and her teammates have to come to terms with what it means. Can Kait still be trusted? The Coalition toys with this question, and periodically shows flashes of conflict with Kait, but not enough. While we get definite answers as to what happens to her, this fascinating plot point is rarely entertained and ends up fizzling out.

That’s not to say the story is a complete loss. It delivers engaging moments in unexpected ways – mostly through robots. One of these characters (who I won't name here) is among the series’ most fascinating and well-spoken, taking the player on a tour through a mesmerizing Frankenstein-like lab filled with grotesque wonders. The relationship between Marcus Fenix, his son James, and the other returning faces is also handled well, and delivers a few legitimate laughs (and plenty of groan-inducing lines as well).

Gears 5's campaign can be played cooperatively by three players. Two are humans and one is JACK

One of this game's brightest spots is the return of one of Gears' unsung heroes, JACK, a hovering robot that is always there with a solution for the team, both for the narrative and gameplay. JACK is an absolute game-changer for combat (and can even be controlled manually in co-op play). With the press of a button, the player can order Jack to do a variety of things, such as flash-bang a group of enemies or provide a protective shield, just like a bastion. He can even grab ammo and guns for you. As you explore the world, you find upgrade items for JACK’s abilities, making it well worth your time to veer off of the beaten path.

The Coalition does a nice job of changing up the pace of combat, even though every arena is littered with waist-high cover. Along with a few great new enemies to fill with lead, wind is again used in clever ways to make players think twice about throwing grenades. I also love how ice can be shot out to send enemies into a frozen drink or to create a temporary safety zone (the latter technique is also used effectively on a Horde mode map).

The one area where Gears 5 stumbles is through the introduction of two open-world sections – one in the tundra, and another in a desert with red sand. To explore these massive spaces, the player pilots a skiff that is pulled along by a sail. This vehicle looks cool and the world it rips across is beautifully detailed, but all you do is drive from point A to point B. Even when undertaking side missions, you don’t engage in combat on the skiff. If you are playing co-op, the people who aren’t driving have nothing meaningful to do. They just sit there until the journey ends. This lifeless open-world exploration doesn’t work and drags the experience down. 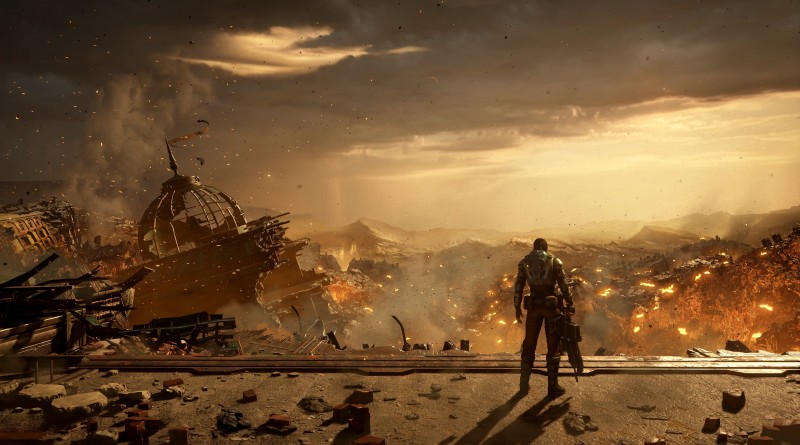 When Gears 5 is in classic form, it pumps out excitement. Horde mode is as thrilling as ever, offering 12 maps, tough waves of enemies (especially those with leeches, a wild new foe that might have the best sound design in the series), and distinct hero traits to alter the flow from match to match. Horde is once again a satisfying marathon; my first 50-wave win took roughly two hours. Most waves take a serious effort by every player, once again making this mode one of the best examples of cooperative play out there.

Horde and the campaign are joined by a fun-yet-odd cooperative experience called Escape. The goal of this mode is for three players to work their way through an enemy complex as quickly as possible. If they engage in a firefight for too long, a slowly creeping gas eventually consumes them. The final seconds of Escape are great, as the three players unload everything they have left to stop enemies passing through slowly closing doors – but the excitement isn’t always at that peak, and the thrills are fleeting. Escape is a fun little diversion to hit up from time to time, but isn’t going to steal me away from Horde mode.

The Coalition is making it easier for new players to spend time in Versus mode, which has always been excellent, but maybe a little too competitive and stressful for new recruits to jump right into. Along with ranked matches, which is likely where the veterans will reside, The Coalition added something called “Arcade,” which is a battle to 50 kills. Every kill and assist rewards the player with skulls that can be exchanged at any time for better weapons. Players can also switch between characters (who have unique perks) at any time. Bigger guns, no limits – the idea works, and ends up being an absolute blast, even if it isn't quite as clever as Arms Race (which is still Gears' best mode).

Just don't expect to see a pure Gears multiplayer experience at launch. Having Sarah Connor, a Terminator, and Halo: Reach’s Emile-A239 and Kat-B320 available as DLC characters on day one is a strange decision. These licensed characters were in most of my matches, which is distracting if you’re trying to embrace all things Gears right out of the gates. On the plus side, player progression and rewards are handled much better this time around – just play the game, rank up, and watch the cards and supplies fly in.

Gears 5 is exactly what it needs to be. This old war vet still packs a punch. The open-world exploration has issues, but that isn’t enough to steal away the thunder The Coalition expertly deploys on the battlefield. The campaign is a fun ride that concludes with a shocker moment and a hell of a setup for a sequel. I’m already looking forward to that follow-up.

On
On
Off
Off
8.5
About Game Informer's review system
Concept
More of the Gears you know, but done up in big and dramatic ways. The open-world sequences don’t work, but making the robot helper more useful is a game-changer
Graphics
That larger-than-life body armor is the same, but the lighting and atmospheric conditions are eye-popping
Sound
Along with familiar character voices returning, the new characters are beautifully brought to life by their actors
Playability
The gunplay and cover mechanics remain exceptional, but the vehicular segments just don’t deliver much excitement
Entertainment
Gears 5 delivers plenty of excitement in its encounters and story, and offers nearly endless thrills in its excellently crafted multiplayer experiences
Replay
High