Cyberpunk 2077 is a work of awe-inspiring ambition, dazzling with its massive scale and creative vision. The world of Night City is a metropolis of futuristic art, stealing your eye with stunning neon-lit architecture and streets filled with citizens made of flesh and metal. Night City is an open world that immediately pulls you in and keeps you engaged with its dark narrative, meaningful player choice, and overwhelming amount of side content.

Your lens into this tech-obsessed society is the protagonist simply named V, a cyberpunk who you fully design, including their voice, backstory (which subtly alters the narrative), and even their genitals. I spent far too much time creating my look, even though I rarely saw it during play due to the mostly first-person perspective. V is fun to control thanks to immense amounts of cybertech, but is an unlikable lead, spouting off profanity and groan-inducing one-liners, and generally displaying a “scum of the earth” personality. 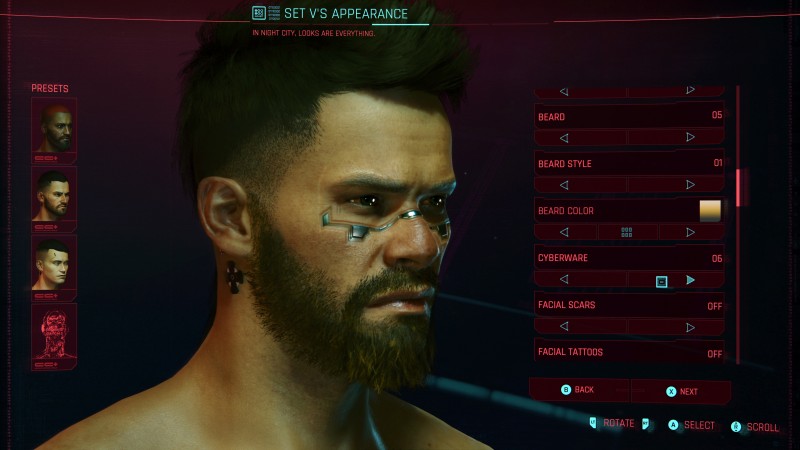 V, while making a mess of conversations, has an interesting story to tell. It goes places I didn’t expect and gets wild toward the end. The narrative hits its stride when V meets Johnny Silverhand, a former terrorist who is now a digital construct that lives in V’s mind. Silverhand’s thoughts and dark ambitions are twisted and dangerous, leading to great conversational choices and decisions that allow players to shape the story and action. The biggest allure of Silverhand is how he’s brought to life by actor Keanu Reeves, who looks and sounds as awesome in the role as he does in any film on the silver screen. Given how wonderful some of the other characters are (with their own long and fantastic arcs), Reeves doesn’t steal the show – but Silverhand is a constant throughout most of the game and helps save V from being too overbearing.

Silverhand will bring a smile to your face, but Cyberpunk 2077 doesn’t have many joyous bones in its body, and is often heavy in the delivery of its dark content. Night City may be vibrant, but it's home mostly to evil people doing terrible things. Some of the content made me uncomfortable, including story moments dealing with abuse and sexual assault. Even the average bystanders sometimes gave me pause, such as a drugged woman being held in place by a man, a setup seen all over the city. Developers should be free to explore all subject matter, but it sometimes feels careless in Cyberpunk 2077 – more like edgy set-dressing than meaningful commentary. 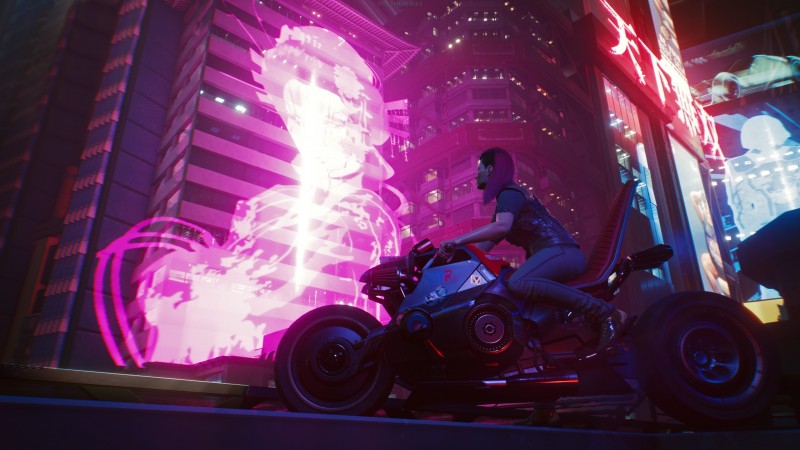 Much like V’s inability to think clearly with Silverhand clouding the mind, Cyberpunk 2077’s story often has different tones, and is all over the place from mission to mission. In one side story, V may come across as likable and mature. In the next, V suddenly sounds like an angsty teenager again (the tone you hear most). It’s hit or miss, but most quests deliver awesome moments, particularly when new NPCs are introduced. Almost every mission-giver or notable character is vividly brought to life in voice, animation, and by the crazy amounts of detail on their body. The same can be said for many of the locations they inhabit; an outstanding level of detail in the world makes each unique area a sight to behold. I can’t stress this enough; exploring Night City is a huge hook that CD Projekt Red knocks out of the park.

Some of the more memorable characters and story arcs are tucked off to the side, and you may never see them if you don’t veer off of the critical path (which can be completed in roughly 15 to 20 hours). I don’t know how many dozens (or hundreds) of hours of side content are around it, but the mission log just keeps growing as you play. While the main story sequences often end with cliffhangers that demand resolution and the thought that you should continue on that path, the best way to experience Cyberpunk 2077 is to see what the city has to offer. Walk into a crowded market, explore a mysterious question mark on your map, and take on the side missions that the denizens are offering – just surrender yourself to moment-to-moment discovery.

CD Projekt Red wants you to soak in the beauty of the world, but also demands you spend plenty of time in menus assigning new abilities, crafting, and sorting through heaps of loot. That isn’t a knock against the game. It’s all handled quite well. Any room you enter could have numerous items to pick up, as well as world-building text you can read. The amount of leveling you can do is immense, which is reflected on sprawling ability charts that take considerable amounts of time to fill out. If you only focus on the critical path, you barely scratch the surface of the abilities, which carry significant advantages to combat, stealth, hacking, and dialogue. It’s amazing how much you can improve and expand upon V’s standard attributes. I also love how doing various things helps improve V in those fields.

Using cyberware and abilities to mess with enemies is good fun, such as cooking a grenade in an enemy's pocket. Hacking cameras and activating devices from afar to distract foes makes stealth satisfying. I enjoyed creeping through environments, hacking the cameras and turrets as I went. I leaned more on stealth than expected, partially because I didn’t find the gunplay enthralling. The weapons you obtain feel awesome (and give good reason to track down the legendary and iconic versions), but the enemy A.I. isn’t great, leading to headshots being delivered like they are going out of style. Some enemies think they are hidden behind thin railings, others charge foolishly toward you and then stop without any cover around them. Harder missions (which are nicely indicated on the log) are a little more intense given the spike in difficulty, but the adversaries are still easy to manipulate, unless they are an aggressive boss or cyber ninja that crowds you quickly.

Johnny Silverhand sadly isn’t the only glitch in Cyberpunk 2077. Not since The Elder Scrolls V: Skyrim have I played a game that is riddled with so many graphical bugs at launch. The danger of entering a seedy bar loses its bite when one of its patrons stands motionless in a T-pose. A high-speed motorcycle chase down a highway is far less intense than it should be when an NPC biker shakes so much he looks like a blur. Little visual hitches in the environment and characters occur frequently, and they’re jarring, but I rarely ran into anything that affected gameplay. The only major issues I experienced were I could no longer look down the sight of my guns during one mission – reloading my save fixed the issue. I also had a digitized visual effect remain after a cutscene. Again, I had to reload and replay a sequence to get the proper outcome. Regardless, the frequency of the odd visual moments hurts immersion, and can outright ruin a suspenseful moment.

Cyberpunk 2077 is dark and disturbing at times (frighteningly so), but the majority of its content is fascinating, and loaded with depth through the various RPG systems and lore. I thoroughly enjoyed my time in Night City, and Johnny Silverhand is a great partner to see the sights with. Cyberpunk 2077 doesn’t overstay its welcome with its critical-path story, and invites players to jack in and stay for hundreds of hours of unique content should they want to. It didn't blow me away like The Witcher 3: Wild Hunt, but is still a hell of an opening to what will hopefully be a new series.

As of this writing, the best way to experience Cyberpunk 2077 is on a high-end gaming PC. That’s how I played for this review, but I also saw how the game performs on various PlayStation and Xbox machines. The visuals and performance take a significant hit on the base PlayStation 4 and Xbox One systems, sometimes looking downright ugly in larger spaces occupied by numerous characters. Even the more powerful PlayStation 4 Pro and Xbox One X struggle with the content (though they run a little better). If you absolutely have to play it on a console, the Xbox Series X/S and PlayStation 5 are the way to go, but it should be noted that they are running the PS4 and Xbox One versions via backwards compatibility. While you see better framerates and resolutions on the new-gen hardware, the performance is still a far cry from PC. CD Projekt Red has said it will release a free next-gen upgrade that truly takes advantage of the power of these machines at some point in 2021. 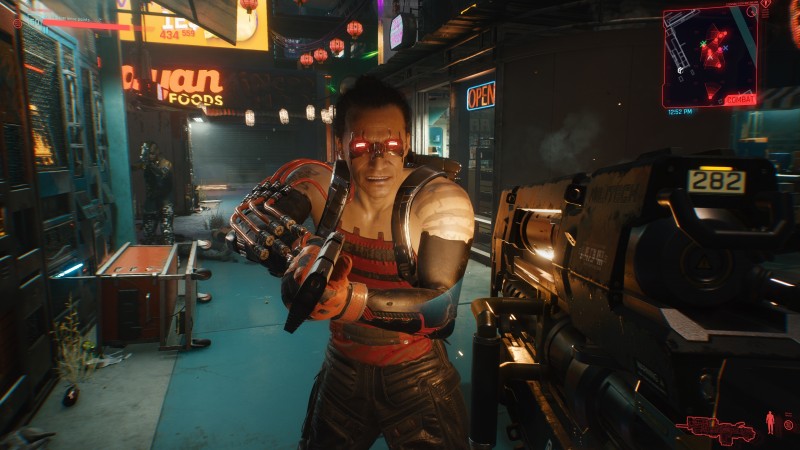 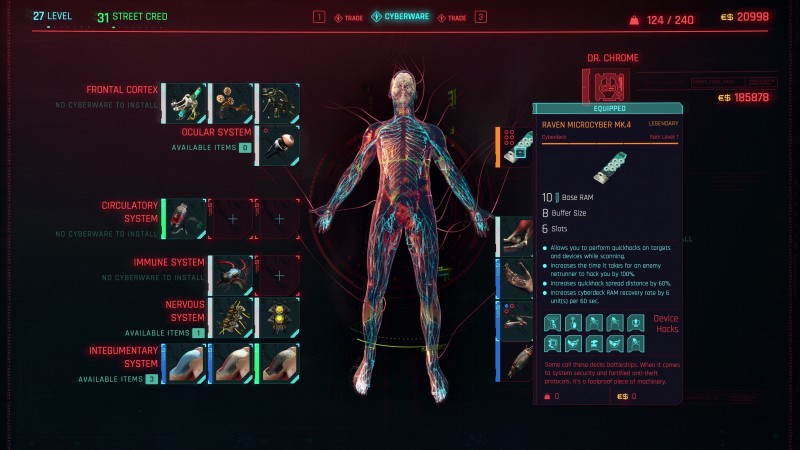 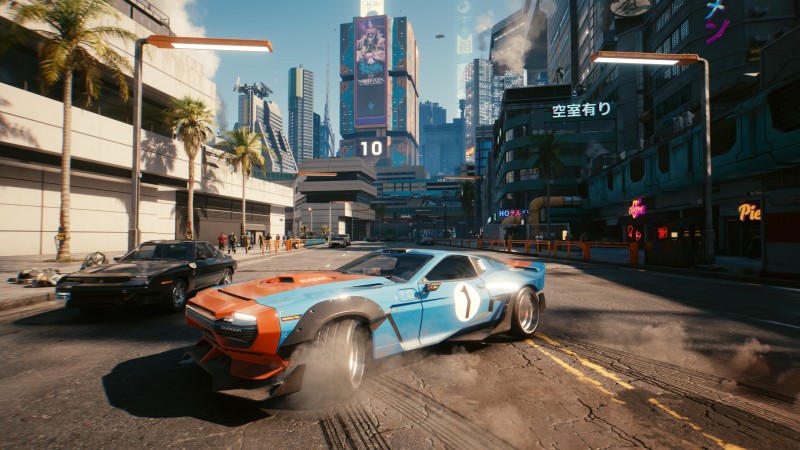 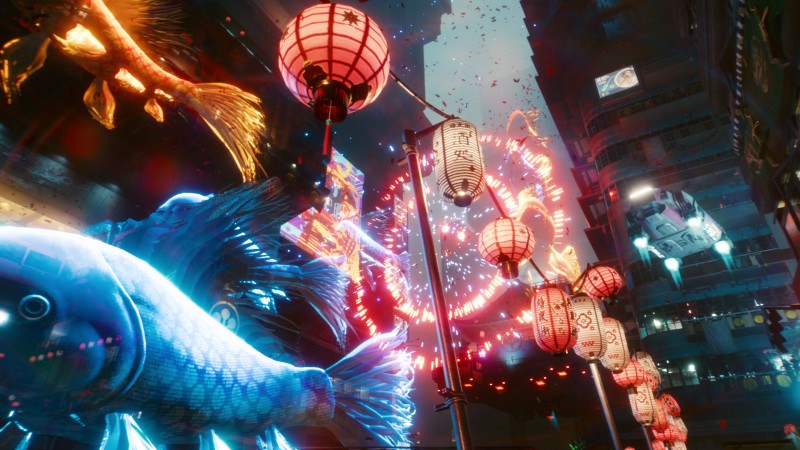 Off
9
About Game Informer's review system
Concept
A deep RPG experience that struggles with gunplay and glitches, but excels with its world, characters, and wealth of loot
Graphics
The level of detail is staggering. Every street corner and interior is worth examining. However, visual glitches occur frequently in the animations and environments
Sound
The electronic and synth-heavy score is fantastic. The radio stations also have a unique mix of songs that fit Night City’s vibe. Keanu Reeves is every bit as good as you would hope he is, and helps overcome some of the protagonist’s cringey banter
Playability
Cybernetic upgrades make stealth incredibly fun, but problematic enemy A.I. steals the fun out of the gunplay
Entertainment
An open world you can get lost in and continue finding new things to do
Replay
High