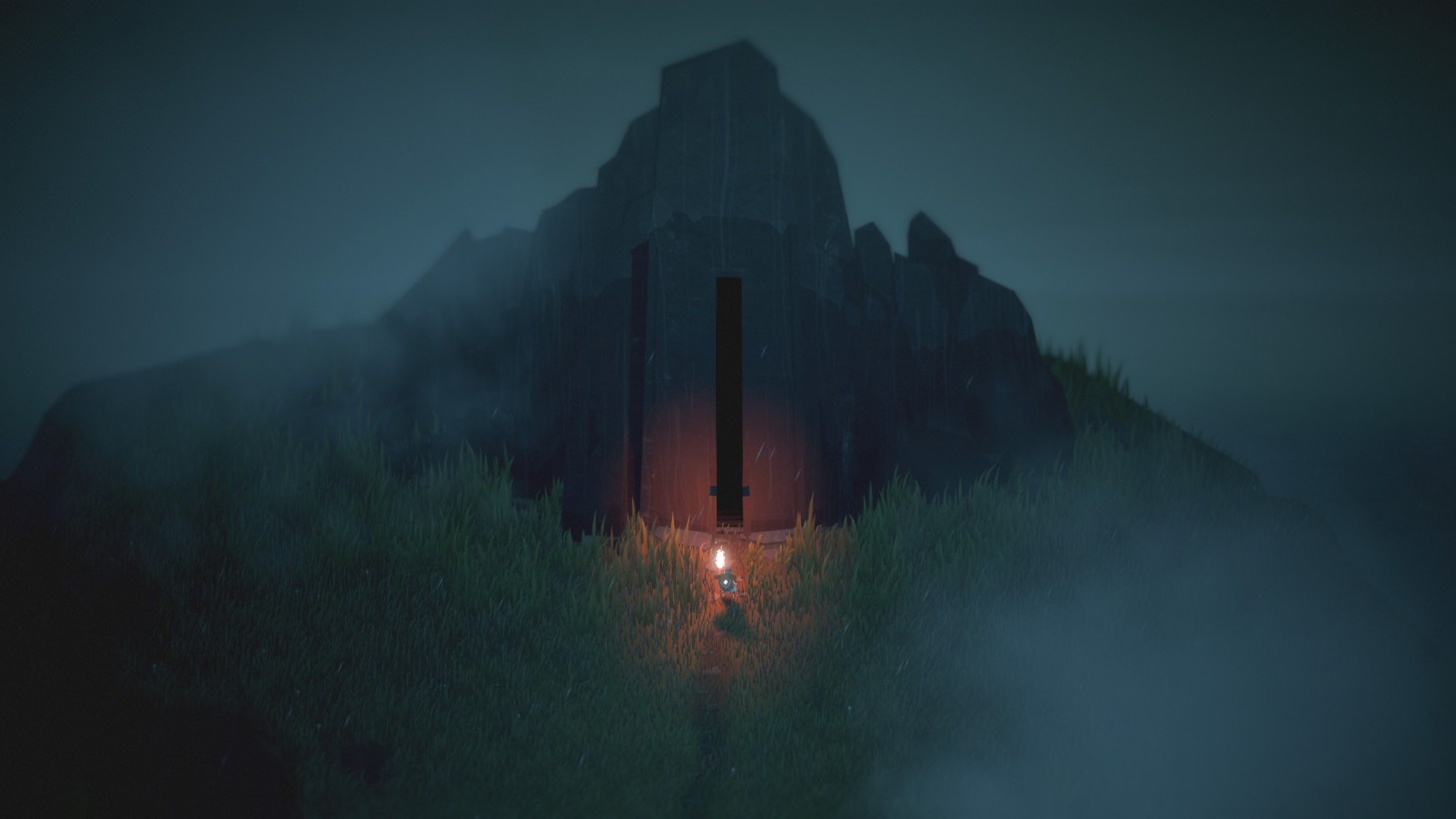 Below is an experience shrouded in mystery and discovery. Your character is a mere speck on the screen, with a zoomed-out camera providing a sense of scale that shows how tiny you are in relation to a vast, often-unforgiving world. The highly stylized art style combines with Jim Guthrie’s enthralling soundtrack to create an immersive adventure that’s easy to get lost into. No matter how strange, everything in Below’s world feels like it belongs, from meandering foxes on a desolate beach to the soft breakaway of blocks as your lantern’s light creates a path through the darkness. But Below’s gameplay can be debilitatingly frustrating, because despite permanent progression through shortcuts and other unlocks, death is swift and devastating, and it can leave you without essential resources to collect your corpse with a fresh character.

Arriving at a mysterious island, your tiny adventurer is armed with a sword, shield, and little else. You figure out how to manage many survival aspects (food, water, heat) while exploring your way to the depths of the island through many biomes and challenges. Sometimes the challenges are survival-based, like staying alive in a frozen cave. Others are more traditional dangers, having to battle off increasingly dangerous enemies, blocking with your shield, dodging out of the way of attacks, and letting fly a perfectly aimed bomb arrow. Or perhaps you need to solve a puzzle by landing an arrow, shining your lantern, or swinging a hammer.

Along the way, you find (and craft) new equipment that allows you to handle increasingly deadlier environments and enemies as you delve deeper into the heart of the island, including a pocket dimension that allows you to store resources for safekeeping. Each new special item you find, buy, or craft allows for satisfying experimentation. Below is unusual in that the deeper you go and the more interesting and wondrous environments become, the more the enchantment is stifled by the sheer weight of lethal traps and foes. From the darkened floors and beyond, death becomes an oppressive force that’s not just difficult or challenging, but unfun.

It can be an absolute nightmare to recover your supplies from a floor that you haven’t unlocked a fast route to, and life without your lantern (which must be recovered from death each time, a critical item that many of the game’s mechanics hinge on) is bleak. By the time you get to take on a super cool boss, you’re left more concerned about your potential mortality than getting to really enjoy how precise and crafted the movements of the entity are. As you travel through the weird and wonderful, much of the enjoyment can be lost, channeled into death concerns, grinding for supplies to ensure that you can recover from loss, or simply running back through lengthy segments to get back to where discovery can begin again.

While every tiny unearthed secret provides a pip of inspiring joy, a singular misstep into a one-shot trap or dark creature can sap the fun in a heartbeat, creating a world where the fear of death reigns over all with an overbearing, heavy-handed truncheon. I also ran into a demoralizing bug where a critical progression item was unable to be recovered after death, leaving me locked out of advancing and forced to restart with a fresh save file.

Despite death’s cold grip threatening to ruin everything (a sense which grows the further you progress thanks to several significant difficulty spikes), the core concepts of discovery and exploration shine through. Finding out how to make arrow-bombs to take out tough foes, finding a shop, crafting a stockpile of elixirs, finding a critical elevator to the surface, and putting new gear to use in order to tackle new environmental hazards feels satisfying to figure out on your own. The first time you engage with new areas and mechanics can be awe-inspiring, as each area has its own special identity that feels like it truly belongs. Putting together the often-esoteric pieces of the puzzle and looking up at the sky from the top of the island is inspiring.

Below’s death mechanics can be devastating and off-putting, and caused me to bounce off the game several times. The survival nags are annoying, and the grinding for a safety net feels like a busy chore, but the overall combination of stylized graphics and soundtrack create an incredible universe that begs to be experienced. You need serious tenacity and perseverance to see the sights, but they are wonders worth seeing. 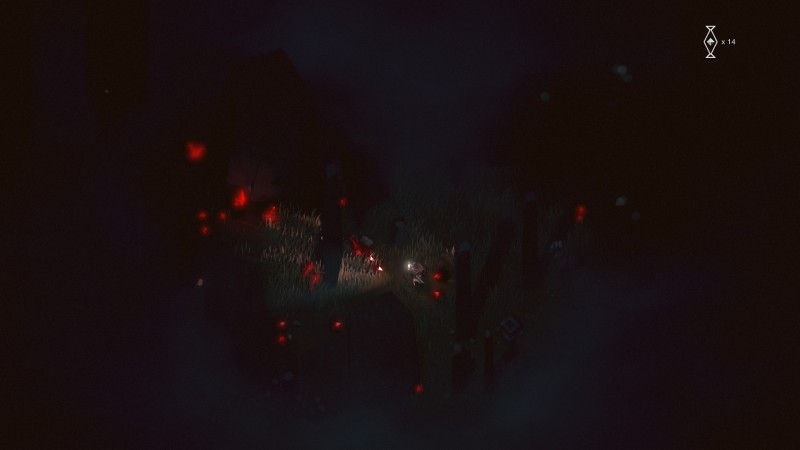 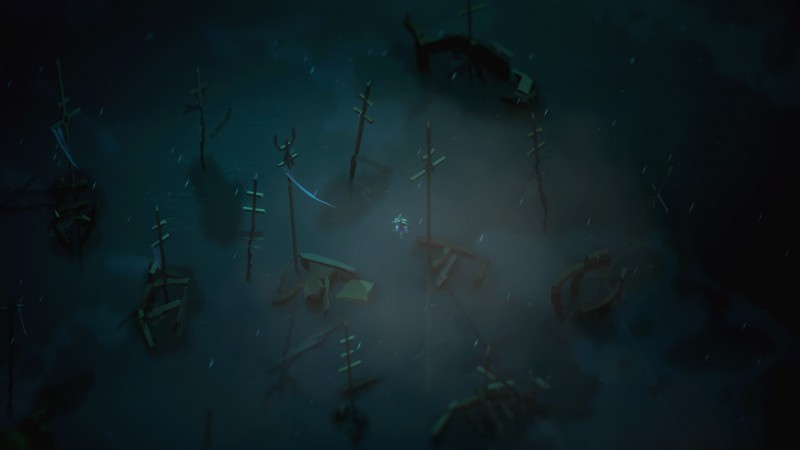 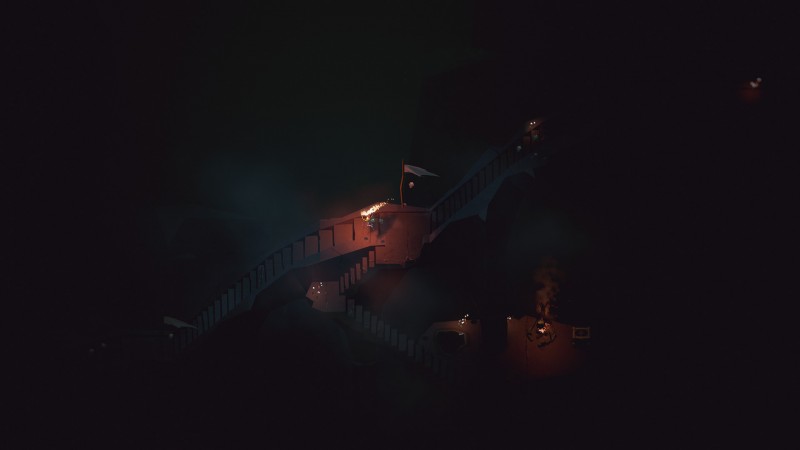 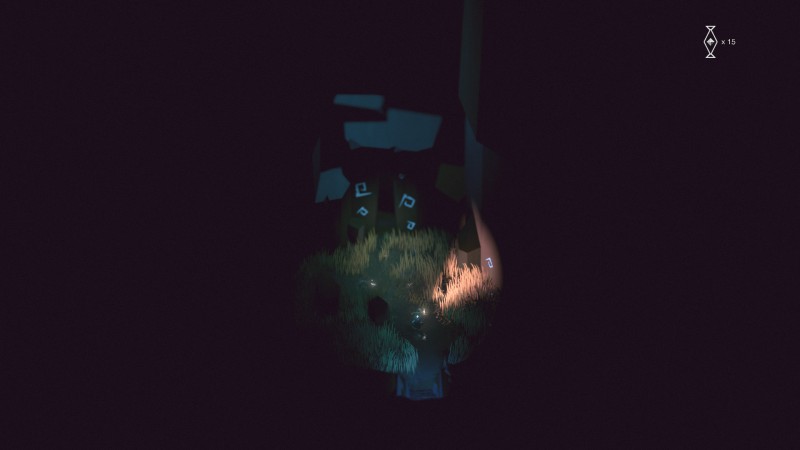 Off
7.5
About Game Informer's review system
Concept
Brave the depths on a mysterious island in a roguelike adventure with little to no instruction
Graphics
The camera and environments work to create a profound, stunning world with numerous areas that feel alive
Sound
Jim Guthrie’s soundtrack is wondrous and mesmerizing, creating incredible atmosphere
Playability
Players are left to discover everything on their own, with significant difficulty spikes and punishing deaths – elements that can be overwhelming and unwelcoming
Entertainment
Below is a beautiful, immersive experience that comes with extensive caveats. Survival can be frustrating for even the most seasoned adventurer
Replay
High