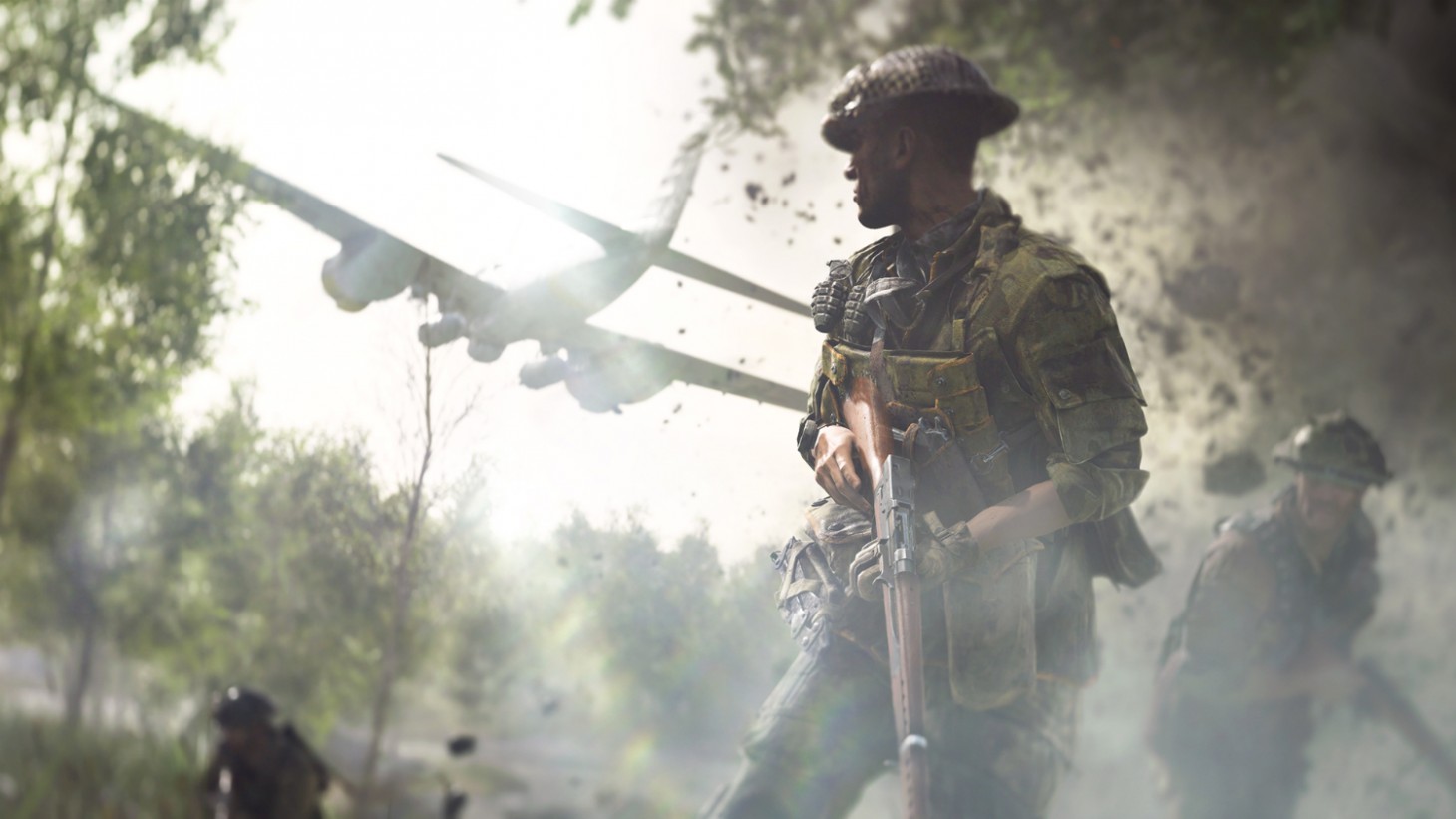 They say all is fair in love and war, but Battlefield fans disagree. The lead-up to the series' return to World War II was firebombed by controversies centered on the role of women in virtual warfare, the perceived lack of authenticity in the new soldier customization system, and confusion over what exactly would be in the game on launch day. Once the dust settled and we finally stormed into the battle ourselves, the resulting game is far from the charred husk of Battlefield’s remains many haters anticipated. In fact, Battlefield V is the safest, most calculated release in the franchise’s history. Like a seasoned general confident in his approach to battle, DICE doesn’t make any bold, redefining changes; instead, the studio equips the game with fan-requested improvements that solidify the series’ tried-and-true cooperative, large-scale warfare formula. Battlefield V is more iterative than it is innovative, and when it does push the war efforts into new territory, the results are decidedly mixed.

The series reputation for combat that emphasizes teamplay and large-scale warfare across land, air, and sea remains fully intact. Battlefield V urges players to squad up with others and cooperate to achieve success, demanding more from its audience than lone-wolf multiplayer games that encourage running and gunning with abandon. The diversity of play is still a compelling draw – being able to command a tank one round, hop into a fighter plane in another, or put your machine gun to good use as one of four distinct classes is an experience not many other competitive shooters offer.

Small changes can make big differences, and the most noticeable and appreciated improvement in Battlefield V directly affects your primary action: shooting. DICE reworked its ballistics system to remove random bullet deviation and deliver more predictable spray patterns for all its weapons. Gone are the days of simply taming a weapon. Now you can learn each rifle’s nuances and master its use, knowing when to let off the trigger to land a kill. Along with other subtle tweaks to aiming, the time-to-kill feels much faster as a result, finding the sweet spot between the more spongy Battlefield games of yore and the frantic one-shot-kills of hardcore mode.

Squad play is the heart of series, and Battlefield V reinforces cooperation with a few subtle and smart changes. Health no longer fully regenerates, so you have to apply a bandage yourself or request one from a nearby medic if you get nicked. Anyone can revive a fallen teammate (though medics can do it in half the time), and holding out hope for a revive doesn’t punish your respawn time in the redeployment screen anymore. Soldiers don’t spawn with an overabundance of ammo, either, which means smart teams always enlist a support player in their squad. The reworked spotting system only allows recon players to individually mark targets (others can merely point to general areas), making them more vital than ever to the team’s cause. The class balance between the four roles may be the best it’s been to date; my only major complaints thus far are related to weapons. The medics need more primary options than just SMGs, which prove ineffective on larger maps that encourage more long-range skirmishes. The bipods on support weapons don’t deploy correctly on cover or railings, either, limiting their effectiveness unless you are prone.

Playing together has always earned players more points in Battlefield, but this year’s Squad Reinforcements system further encourages collaboration. Each team action slowly nets the squad points, which the leader can use to call in resupplies, order vehicles, or if they save up enough points, unleash a devastating rocket onto enemies. I like the idea of rewarding teamplay, but the system doesn’t share the wealth. Only squad leaders get points for the V1 rocket kills, which should be divided among the entire squad.

Teamplay gets another boost thanks to the new fortifications system, which allows soldiers to bolster defensive positions at predetermined places with sandbags, barbed wire, and even weapon emplacements. This addition feels long overdue and fits perfectly into the Battlefield motif, giving soldiers who aren’t as comfortable staring down their sights another way to contribute to the war efforts. DICE’s first implementation feels rigid – there is no logic as to why fortifications are available for some spots in the base and not others – but at least it gives defenders cover when buildings around a flag are largely devastated. That said, defense still isn’t incentivized enough; players are still more prone to chase flags in older modes like Conquest rather than hunker down and hold a position.

No matter whether you are attacking or defending, you can count on a gorgeous backdrop. Battlefield V only has eight maps at launch (much more should come via the Tides of War service), but the settings include wintery mountains, dusty deserts, lush countryside, and bombed-out cities. The weather effects add to the sense of mood; as the wind picks up in the harsher climate, visibility becomes impaired and forces teams to adjust their tactics. My favorite new map is Arras, which has a small French village in the midst of yellow canola fields that provide ample cover for encroaching enemies. The destructibility is turned back up to impressive levels we haven’t seen since the Bad Company games; tanks can roll right through buildings, and most cover can be obliterated with a well-placed rocket.

Each map is compatible with the six game modes Battlefield V currently features (more are on the way). The lineup includes old favorites like Conquest, Frontlines, Domination, and Battlefield 1’s popular Operations (which is rebranded here as Breakthrough). Battlefield V’s signature mode is Grand Operations, which preserves the multi-map battle format of its predecessor but sprinkles in a variety of other modes along the way. This change isn’t for the better, as some modes kill the tension and focused objectives that made Operations such a thrill. When Grand Operations maps open up to include more than three objectives at once, the battles become scattered and lose their intensity.

Intensity is also scarce in the War Stories, the single-player campaign formatted like short stories. I love the concept of telling seldom-heard tales about war heroes who rose to the occasion in impossible circumstances, and DICE created interesting characters who each educate us about lesser-known fights during World War II.  I also appreciated the somber, revering tone the developers adopt to bring these three tales to life. But presentation aside, the missions feel rote, rarely tap into the Battlefield magic of large-scale warfare, and fail to create memorable moments like the multiplayer does.

Regardless of which multiplayer mode you are playing, your experience feeds into a complex progression system that allows you to unlock new weapons, specializations, gadgets, and cosmetics for each class. The fashion available is conservative and nothing like the immersion-shattering gear many expected after seeing neon face paint and retro-futuristic prosthetic arms in the promotional footage – you’re mostly unlocking era-appropriate military gear in shades of green, gray, and tan. A currency system lets you buy more cosmetics, but the storefront feels like a conceptual test right now, with only 10 items to purchase. Most of the options available in the Armory are expensive, and it doesn’t populate the smaller cosmetics you can purchase buried deep within customization menus, so you never have the convenience of seeing all the available items in one place.

Battlefield V’s new Company hub is your one-stop shop to customize your weapons, apparel, and vehicles, but doesn’t offer the flexibility longtime Battlefield fans expect. To reach its potential, we need to be able to save multiple configurations for each class so we can quickly swap between loadouts. For example, we should able to swap an Assault soldier armed with a long-range scope for one better suited for close-quarter battles on the fly.

Minor but persistent annoyances are also common on the warfront. While the new movement system looks good, soldiers have problems vaulting over small embankments and they sometimes clip through cover when prone or during revive animations. DICE’s stubborn approach to squad spawns means soldiers still appear out of nowhere in the middle of battle; this is especially annoying when you are engaged in a one-on-one firefight and suddenly you are vastly outnumbered. Occasionally, the explosives needed to destroy objectives fail to spawn, leaving attackers no chance to win the war, or the loading hangs in the middle of rounds, forcing you to restart the game altogether. DICE also removed the ability to switch teams, which some players abused in the past for a score advantage, but this means if your friend spawns in on the opposing team you have no immediate remedy at your disposal other than quitting and finding another match. Also, tanks are not fast or deadly enough; right now they are hulking machines that crawl across the battlefield at a snail’s pace, and panzerfausts carried by infantry are more dangerous to tanks than the hulking cannons of their counterparts.

Battlefield V is a hard game to critique at this stage. Many of the minor tweaks improve the overall gameplay, which is still fun. But the majority of the innovations have yet to arrive, and new systems like the Company and Armory still need to be fleshed out. This game’s legacy won’t stand on the content currently in the game. Ultimately, Battlefield V will be defined by the success or failure of the pending Combined Arms cooperative mode, Firestorm battle royale mode, and whether or not DICE can continually provide new and engaging content. On day one, the game feels a few reinforcements short to pull off the overwhelming victory we’ve come to expect given the series’ strong lineage.

Battlefield V feels more iterative than innovative, partially because so many of its touted features are still missing.

Purchase More Info
8
i
Game Informer's Review System
Concept Battlefield returns to World War II with a new live-service model, which means much of its headlining content isn’t here yet
Graphics DICE has always made beautiful games, and Battlefield V is no exception. Each of the varied locations is a sight to behold and its use of destructibility in multiplayer is second to none
Sound From the crack of weapon fire to the rumbling destruction of a V1 rocket, the sound effects in this shooter are the genre standard bearer. Its only weakness is location-based sound; I wish it were easier to hear the approaching footsteps of enemies
Playability The reworked gunplay is snappy and predictable, which helps land the time-to-kill in a sweet spot between traditional Battlefield and hardcore mode
Entertainment Battlefield V is a good, if safe game that feels more iterative than innovative. Its legacy will likely be defined by how steady and interesting the stream of new content is moving forward
Replay High