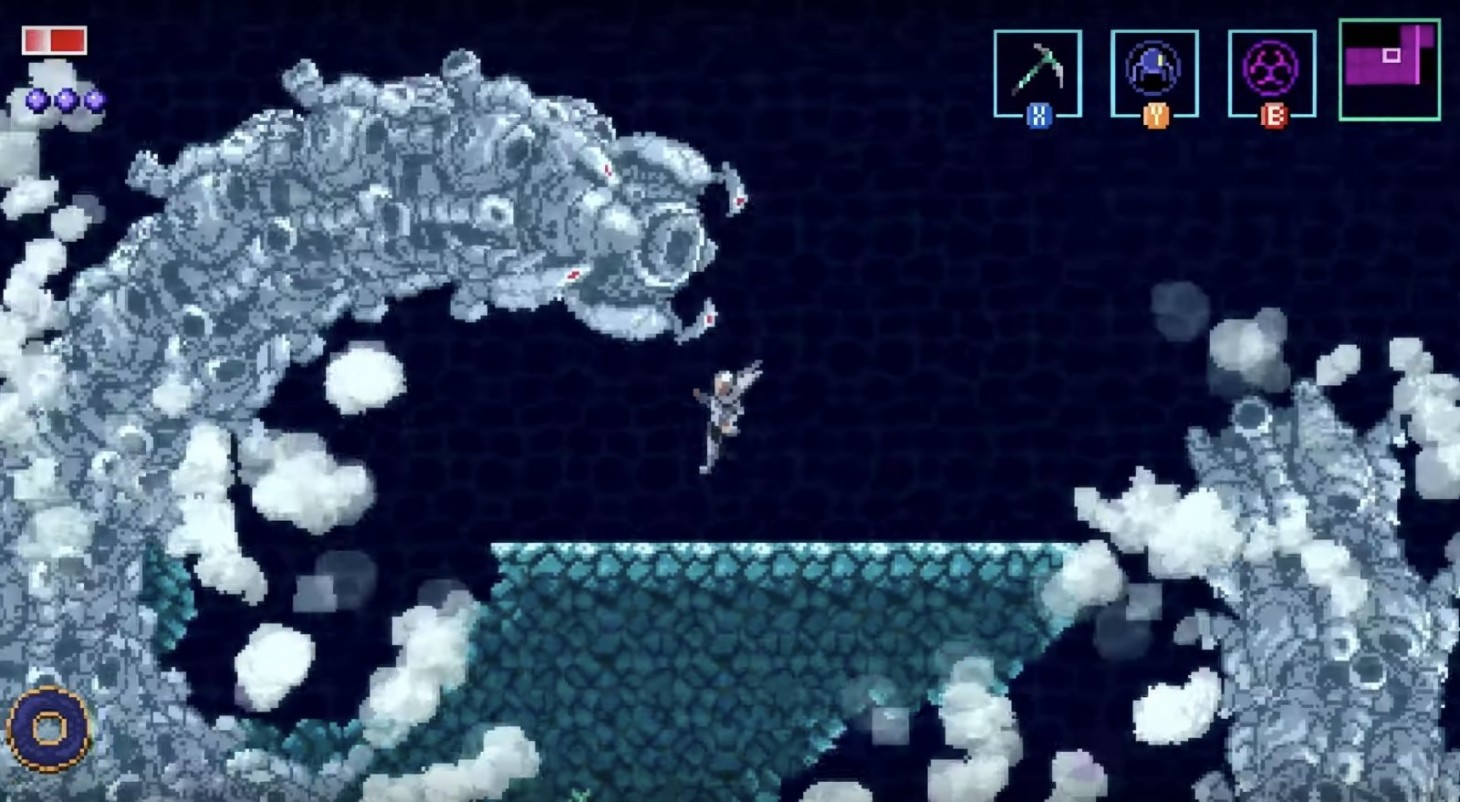 Thomas Happ’s 2015 Axiom Verge is a triumph of both singular vision and nostalgia. The scope of that project was astounding, as it was accomplished almost entirely by a single person. That project also earned its reputation as the most Metroid-like game ever released that didn’t actually bear the name. Years later, the sequel is more confident in its strides away from that core inspiration, but it remains no less impressive in size and breadth. Players can anticipate a lengthy and thoughtfully crafted adventure through gear-gated paths and an elaborate science fiction narrative. But, Axiom Verge 2 is also a game that skirts the line between demanding patience and inducing frustration. The pacing lacks some of the big moments that might lend structure and excitement, and the many interconnected corridors begin to blend into a long and confusing blur.

Protagonist Indra Chaudhari is an eccentric billionaire hoping to track down her missing and estranged daughter. Her search takes her to an abandoned Antarctic research station and a cargo elevator that opens into an entirely different world governed by bizarre physics, technology, and history. Only the most fervent followers of Axiom Verge lore will detect the connective tissue to the first game. Still, alternate universes and the nature of consciousness are concepts very much at play. The story flirts with themes of identity and the question of what makes us human, but even with some sophisticated ideas, I was a bit let down by the story. One significant beat early in the plot offers a surprising shift in the narrative and gameplay direction, but much of what follows lacks the revelatory follow-through I hoped to find.

If there’s a reason to play, it’s to marvel at the immaculate level design and the clever upgrades that open up new paths for exploration. The character improvements are intriguing, from navigating a remote drone through tiny openings to exploding into a swarm of nanites to knock down a boulder. The most exciting aspect to exploring is the overlay of an entire second world on top of the first, and both have slightly different geometries and upgrades to track down. Puzzles often take advantage of this dual-world dynamic, demanding you think in multiple dimensions. The experience is trippy and often satisfying in its challenge.

New ranged and melee weapons are upgradable for some added kick, and a skills progression system allows further arsenal improvement, health expansion, and more. There’s even a hacking tool to upgrade, providing the chance to open particular locked doors or turn aggressive enemy technologies into allies. Even though the upgrades and weapons are fun, the combat never takes off. Individual enemies often feel like nuisances rather than a challenge. Several large optional monsters are scattered across the map, but overcoming them rarely demands great skill. And in an unusual twist, given the genre, the game has only a couple of encounters that you might term as bosses, and even those lack depth.

The gradual unlocking of the Axiom Verge 2 map leads to several enjoyable moments of discovery. Many of the hidden paths and locked-away improvements made me smile.  Unfortunately, I found those moments of progress and discovery unevenly paced. Just as I began to get in the flow of exploration and the map opening up, I would hit a wall. The massive size of the map, usually a thing I’d celebrate, suddenly became a barrier to my enjoyment as I slowly backtracked through dozens of rooms, looking for a newly opened space. The map is hard to read and contains few clear indicators for blocked paths or the location of unreachable items.

Along with the odd absence of meaningful boss encounters or story beats, the sprawling map gave me a sense of aimlessness and consistent confusion. Without a doubt, some of that vibe is inherent to any game inspired by the likes of Metroid. But here, I found the sensation overwhelming, sometimes taking me out of the otherwise pleasant rhythm of discovery and exploration.

Nonetheless, even when Axiom Verge 2 left me frustrated, I never lost the sense of its intelligent design and mind-bending premise. With these first two games, Happ has laid the groundwork for a particularly weird and captivating fiction, and we’ve only just scratched the surface of its secrets. While I hope I don’t have to wait another six years to play Axiom Verge 3, I’m fascinated enough to have a controller at the ready for its inevitable return. 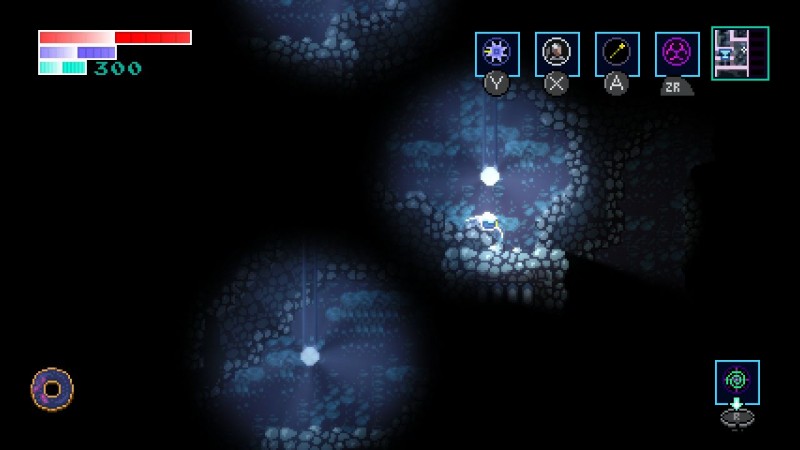 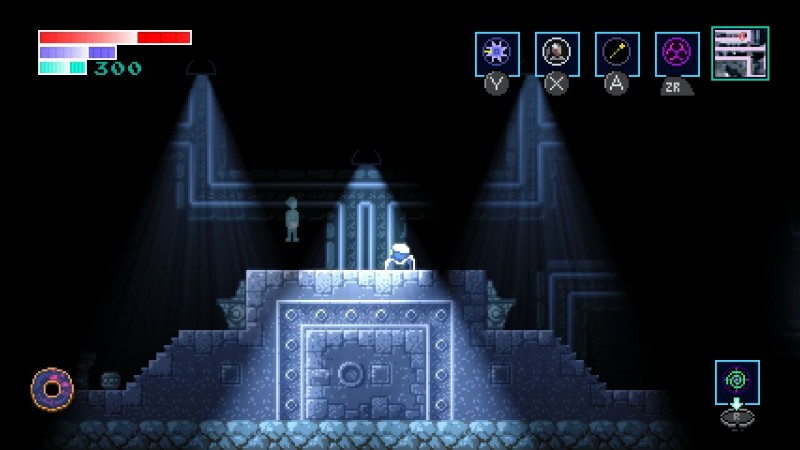 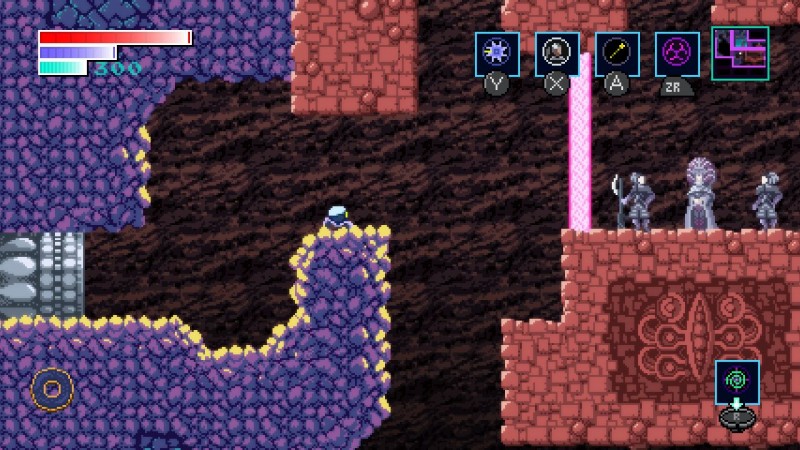 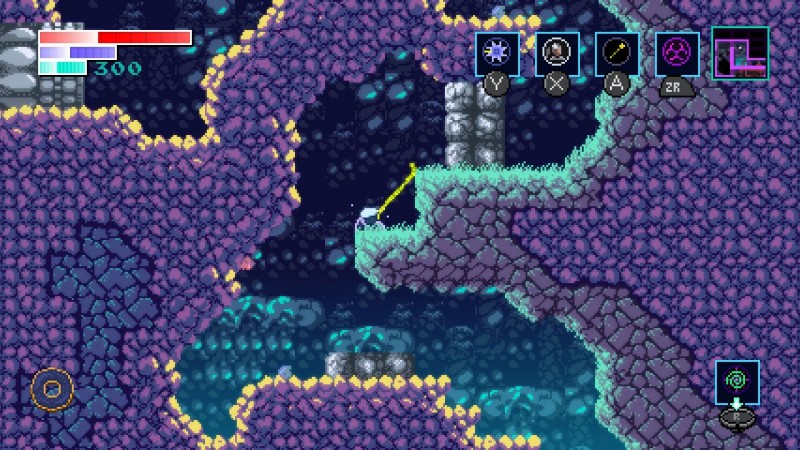 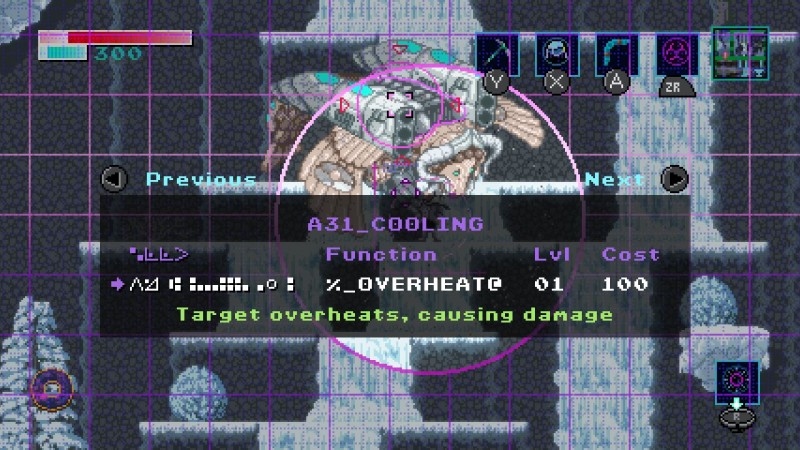 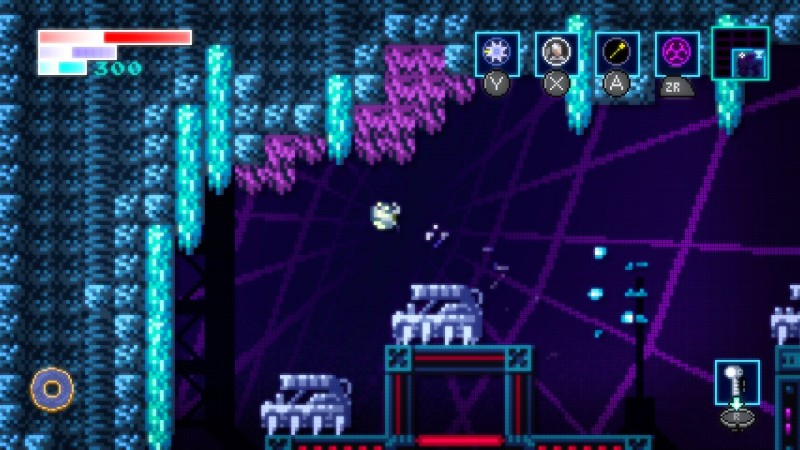 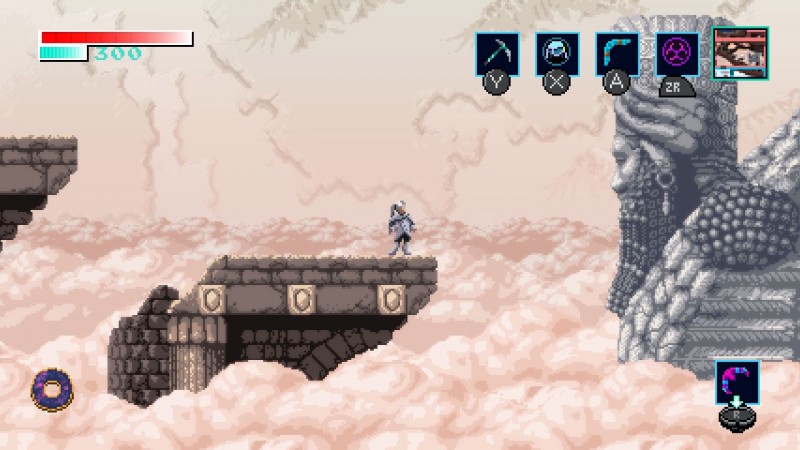 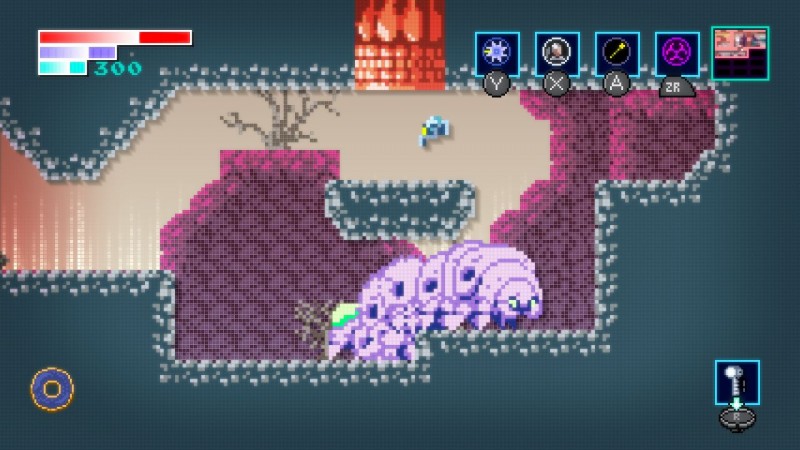 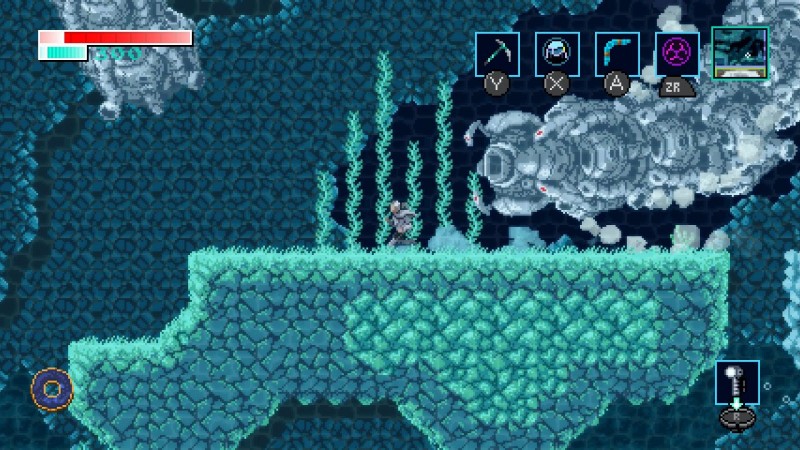 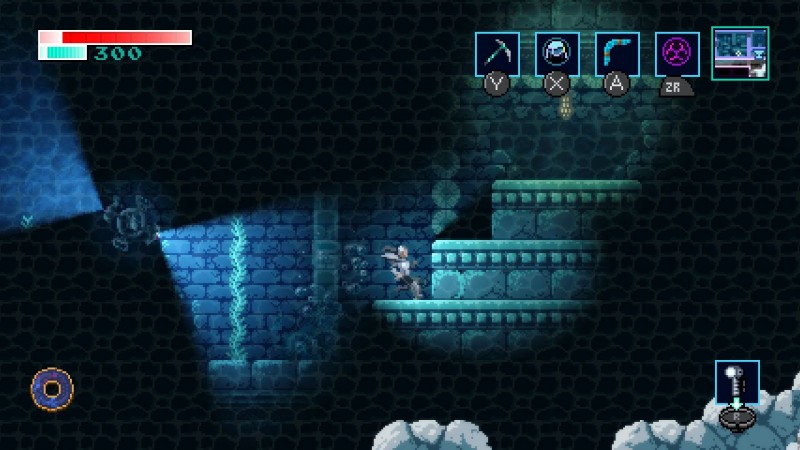 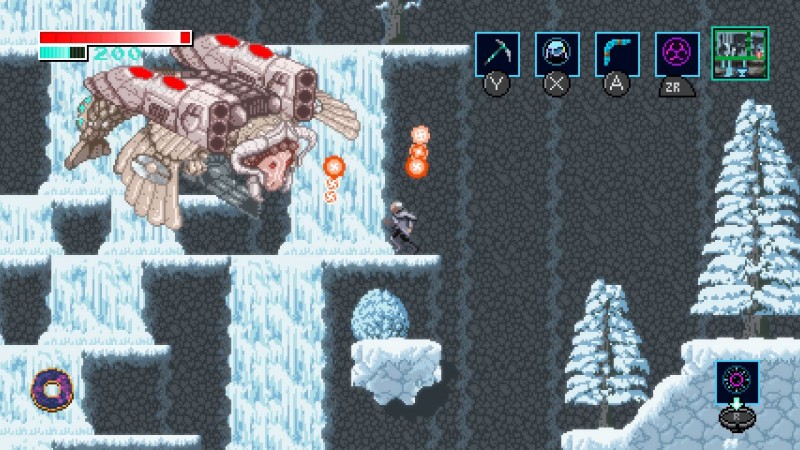 Striding more confidently free of its Metroid inspirations, Axiom Verge 2 is a worthy successor, but it takes patience to fully enjoy.

Purchase More Info
7.75
i
Game Informer's Review System
Concept Explore an alternate dimension of winding corridors and forgotten technology in this mostly standalone follow-up
Graphics The pixel graphics are evocative and colorful, but that stylistic choice has a cost, especially when trying to read the map
Sound The novel soundtrack draws harmonies from various world music traditions while mixing in a healthy dose of punchy synth sounds
Playability The ramp-up of new abilities and gear is steady, but a game this focused on exploration needs more tools to manage navigation
Entertainment Clever level design and consummate world-building are great fun, even if the pacing and exploration sometimes lead to frustration
Replay Moderately High