Despite being a fun, simple puzzle game well suited for mobile play, many point to Angry Birds as a progenitor of the over-simplification of video games. With that public perception and all the random trajectories Angry Birds has explored with its myriad offshoots in the past, I wasn’t sure what to expect for its virtual-reality adaptation. I was happy to discover that Isle of Pigs is a relatively straightforward take on what made the original Angry Birds so enjoyable: Knocking stuff over is just plain fun.

In Isle of Pigs, you are presented with poorly constructed three-dimensional structures with an assortment of green pigs on them. You can zip to specific locations surrounding the structures to get a better look at them and when you find the spot you think will knock the whole thing over, you hold up your slingshot in one hand and pull back the rubber band with your right and let fly your bird. If your aim is true and the physics gods like you, everything falls over and you get stars – hopefully three.

The mechanics are simple, and watching the physics take over to topple what you just shot a projectile at is a joy. Thanks to the motion controls, you also have much more control over your aim than in the original Angry Birds, which makes it easier (and more fun) to aim for specific load-bearing columns. Being in virtual reality also lets you look around the structures, lean in for a closer look, or position yourself at the perfect angle to see and hit that hard to reach area. I regularly fired birds between columns at specific locations with ease.

The gameplay is simple and rewarding, but it doesn’t reach beyond its initial, admittedly enjoyable hook. Only the four original bird types are available, and you have to use them in a pre-determined order for each puzzle. A handful of boss levels mix things up a little, but mechanically, those levels are the same as the others. They just feature a larger pig with a health meter. That simple style of play works well for Angry Birds on mobile when you can easily drop in for a quick level and duck out, but here you literally have to suit up in order to play which often leads to a feeling of, “Oh. That was it?”

Getting through the whole experience is pretty quick since there are only four worlds each with 13 levels. To its credit though, I beat the whole thing in one sitting because I was enjoying myself so much. Developer Resolution Games is promising additional levels and updates in the future, but for the moment, the whole experience feels small but fun.

Isle of Pigs does VR well in that it is not a demanding or strenuous experience. Looking at a teetering structure in a 3D space, moving around it to eyeball its weakest point, and then picking up a bird to fling at it is just fun. It sticks to what Angry Birds is good at – satisfying destruction – it just needs more content to become a VR game I would universally recommend. 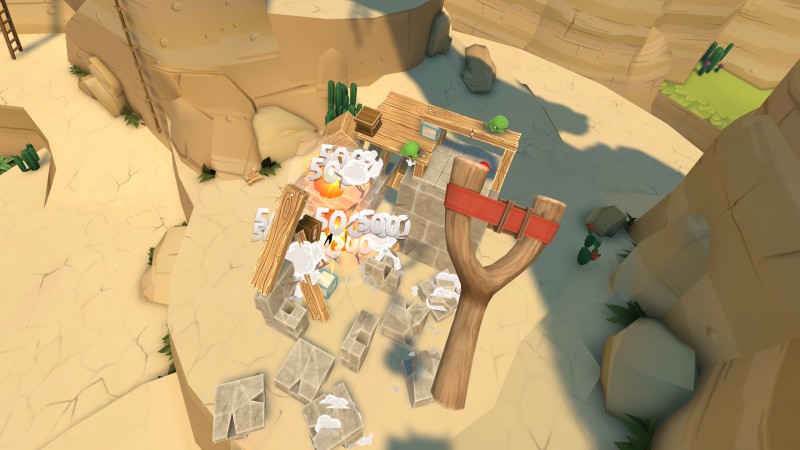 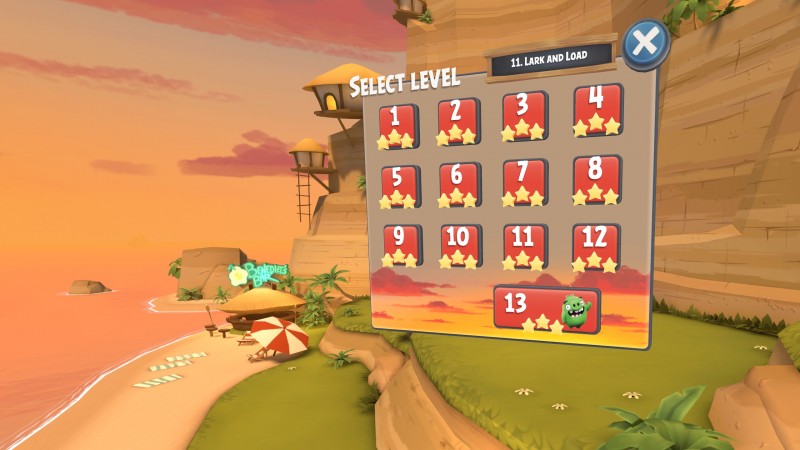 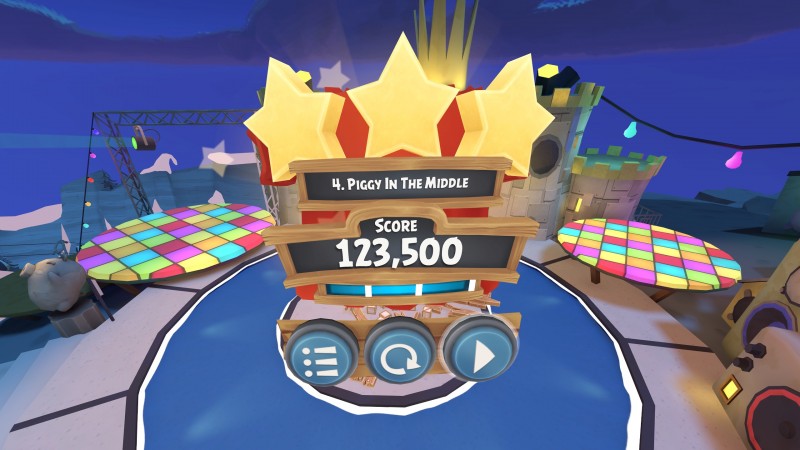 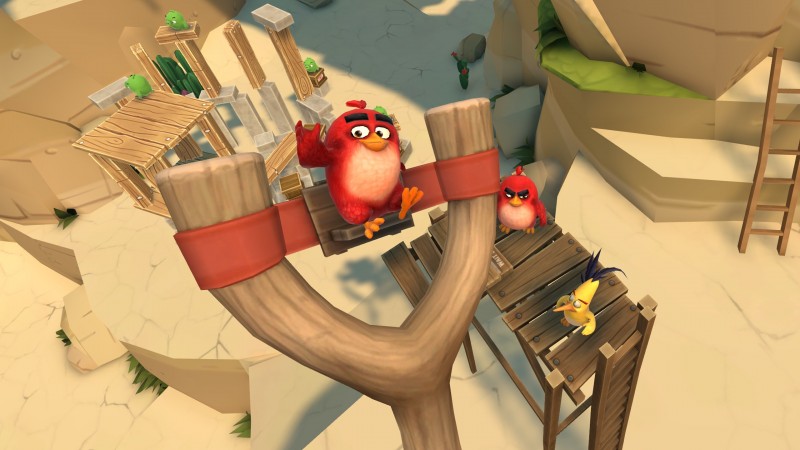 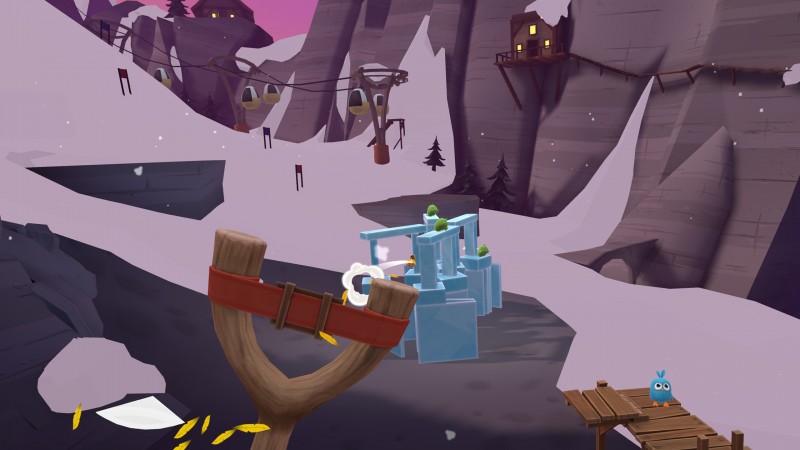 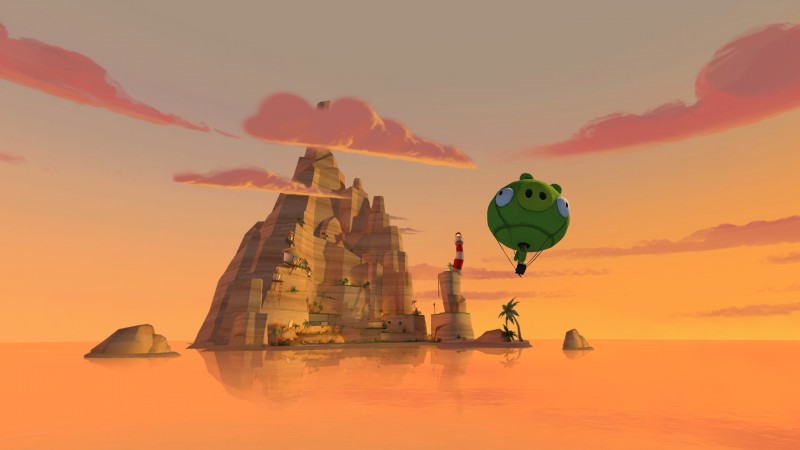 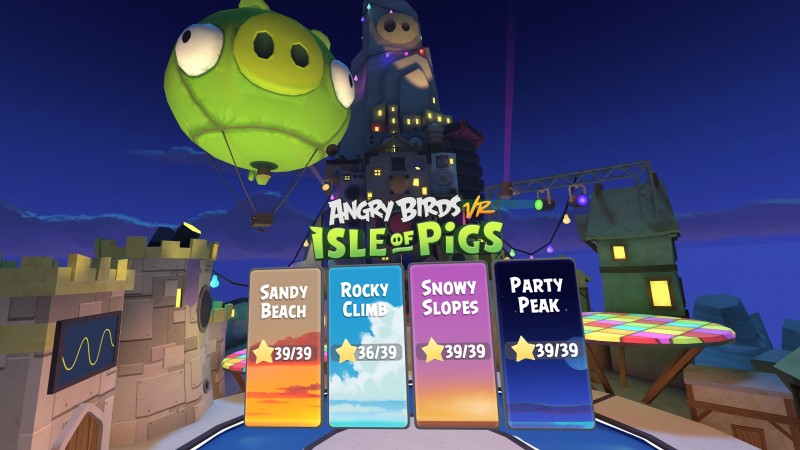 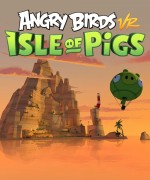 Isle of Pigs is a relatively straightforward take on what made the original Angry Birds so enjoyable: Knocking stuff over is just plain fun.

Purchase More Info
7.25
i
Game Informer's Review System
Concept Take the familiar Angry Birds structure-collapsing gameplay, make it 3D, and place a slingshot in players’ motion-controlled hands
Graphics Isle of Pigs borrows its bird designs and general aesthetic from the 2016 movie based on Angry Birds. As a result, it doesn’t have a distinct identity, but it looks nice
Sound The familiar (and catchy) Angry Birds theme makes an appearance, but it’ not as bubbly or fun as it has been in the past. The sound effects of the buildings falling apart are satisfying
Playability Collapsing structures is as simple as pantomiming the act of firing a projectile from a slingshot, and it feels great
Entertainment Knocking over buildings in a virtual 3D environment is surprisingly satisfying and moving around the structures in a 3D space to pinpoint the best spot for potential collapse is a fun, puzzle-solving exercise
Replay Moderate