The prospect of exploring the cartoon apocalypse of Adventure Time’s Ooo in a video game is incredibly enticing. Pirates of the Enchiridion turns Ooo into a world where you can go off and explore in any direction at nearly any time, which is what I want from a game taking advantage of the Adventure Time license, but it fails to deliver an engaging adventure within that framework. Covering the world in water limits potential exploration opportunities, you have little reason to do more than just the main story missions, and technical problems make the whole thing feel unstable.

Pirates of the Enchiridion begins with the land of Ooo getting flooded after the Ice King’s kingdom inexplicably melts. Jake the dog and Finn the human procure a boat to figure out what happened, and it sends them on a trip to familiar locations like the Fire Kingdom to fight bad guys and complete simple missions like finding Princess Bubblegum and returning her to her Candy Kingdom.

The strange humor of Adventure Time comes through in the story, thanks in large part to the cast reprising all of their roles. The crew sings silly shanties recounting what is happening in the story, and Jake makes frequent jokes about how their adventures usually end in about 20 minutes and how he expects once they complete this adventure, it will be like Ooo never flooded. I was also a fan of the narrative’s conclusive reveal that is played for one final, solid joke.

Calling this version of Ooo an open-world is only technically accurate. You can go anywhere on the map after completing the opening tutorial, but only a few islands are truly accessible and slowdown and excessive load times make everything feel disconnected. A compass at the top of the screen points you in the right direction as you travel, but no on-screen minimap is present to guide you. This means you must frequently pause to check the map, and pausing the game interrupts your ship’s momentum. Every time I checked the map, I basically had to start my boat from a stop, which was annoying.

Incentives for exploring while on your boat are rare, so you generally just beeline to the next story mission. It gets more interesting when you leave the boat to roam the handful of kingdoms and complete missions. In these moments you can hot swap between your team of Jake, Finn, Marceline, and BMO to run around the small kingdoms to pick fights, find treasure, and use abilities. For example, Jake can grow to carry everyone to higher ground, and BMO can hack locked doors. In the kingdoms, going off the critical path can pay off, but the rewards are generally additional healing or combat items, which are helpful but underwhelming.

The turn-based combat fighting is one of Pirates of Enchiridion’s strongest elements. Each of your four characters has distinct abilities that play well to support one another, and they power up their ultimate attacks in different ways. Finn charges by attacking, Jake charges by taking damage, BMO charges by using items, and Marceline charges by delivering killing blows. This dynamic forces you to be thoughtful about your actions and go beyond the basic attack command. The combat isn’t challenging, but it had enough depth to keep me from getting bored.

Technical issues drag it the total Enchiridion experience down. The load times and slowdown are annoying, misplaced or oddly mixed sound cues are frequent, and I experienced two full crashes. Good checkpoints made getting back into the action quick, but the crashes made me nervously cross my fingers at every loading screen. I also noticed strange, transparent lines on the map-screen icons that just lent the whole game a feeling of being unpolished.

Pirates of the Enchiridion is not the open-world game I was hoping for, but it is on the right track. This is a genuine attempt to create the type of experience the Adventure Time license deserves. It comes up short in many ways, but I still did get to have an adventure in Ooo, even if it was flooded with both water and technical issues. 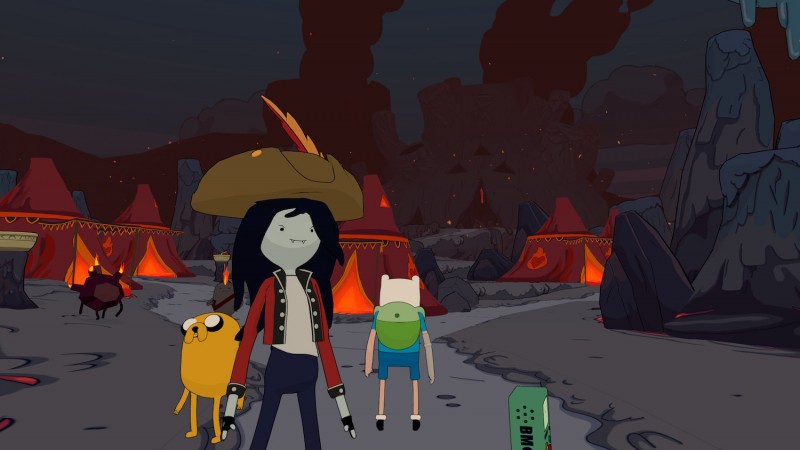 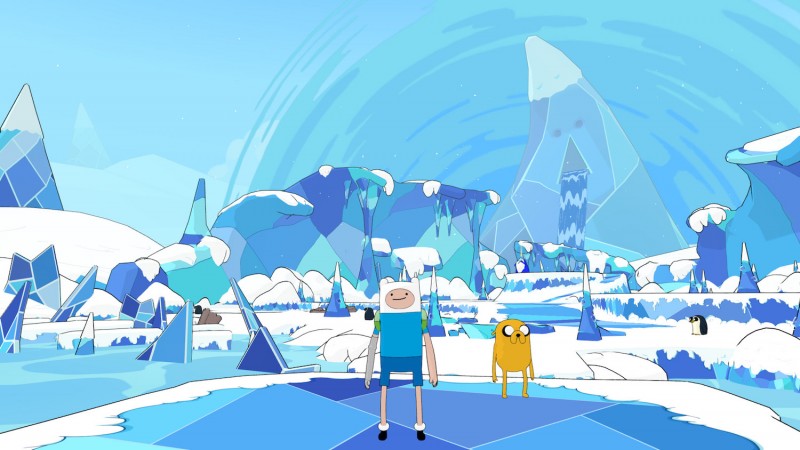 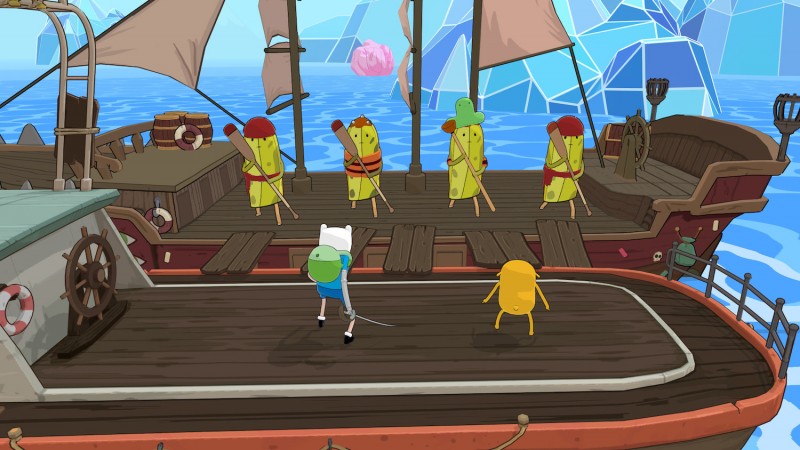 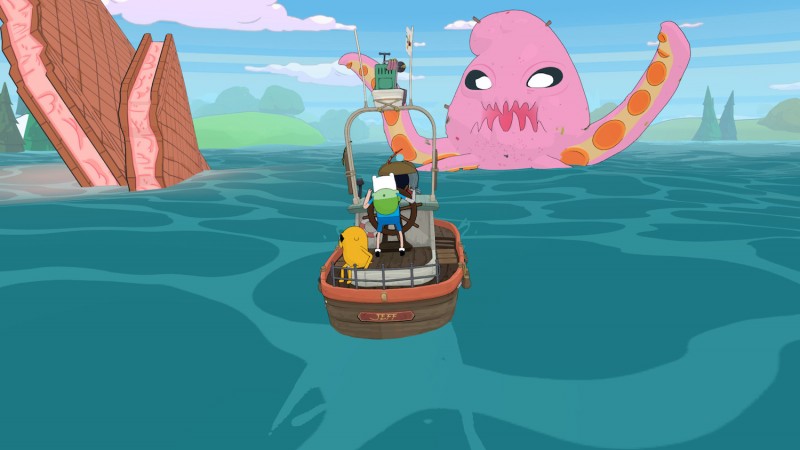 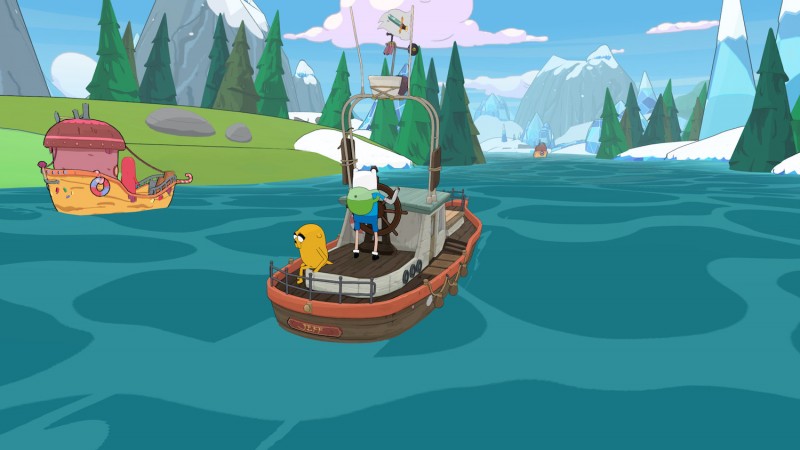 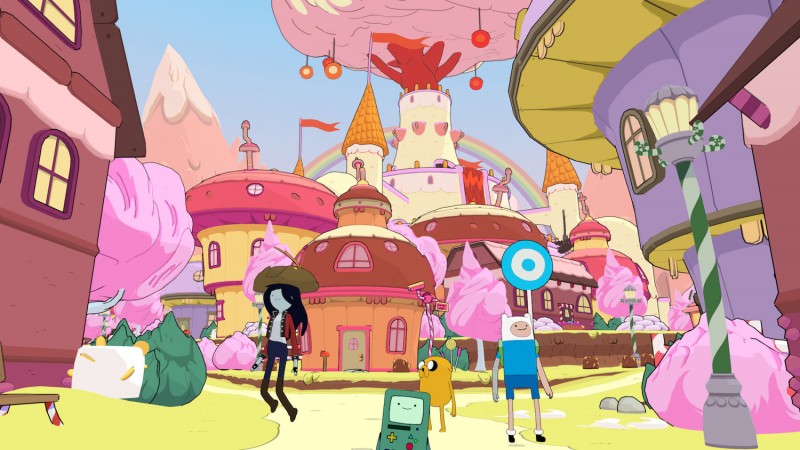 6
About Game Informer's review system
Concept
Explore an open, flooded version of Ooo in a pirate ship and take on bad guys in turn-based combat
Graphics
The characters are underwhelming and the environments are less than exciting, but the animation does a good job of showcasing the assorted quirks of Adventure Time’s bizarre cast
Sound
The performers from the show reprise their roles, and they know these characters well. Music and sound effect cues are all over the place; they arrive early, late, and occasionally not at all
Playability
Moving around the world and sailing the ship are both perfectly serviceable. The way you select attacks in combat is simple and keeps everything moving at a brisk pace
Entertainment
Combat is a highlight and I laughed at some solid jokes, but exploring Ooo is a disappointment. The game is also plagued by technical problems
Replay
Moderately low 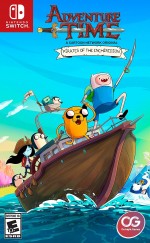 Adventure Time: Pirates of the Enchiridion