Last month, Imran got the chance to go hands on with The Dark Pictures Anthology: Man of Medan, the latest title from Until Dawn studio Supermassive Games. During that session, he briefly touched on the game's socially oriented Movie Night mode, in which players pick a character and pass the controller when the action shifts to that character's perspective. Today, Supermassive has released a new dev diary that highlights the feature and explains why horror and co-op are such a natural fit.

Just like with Until Dawn, player choices have direct consequences – something that's bound to rile up local players, whether they're cheering after a narrow escape or bemoaning a character death thanks to a poor decision from the person on the other end of the couch. This mode is completely optional, so you're welcome to take it all on solo if you only want yourself to blame.

The Dark Pictures Anthology: Man of Medan is coming to PlayStation 4, Xbox One, and PC via Steam on August 30.

For more on Man of Medan, take a look at Kim's earlier preview as well as en extended chunk of gameplay. 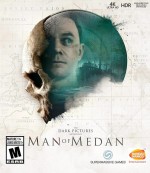