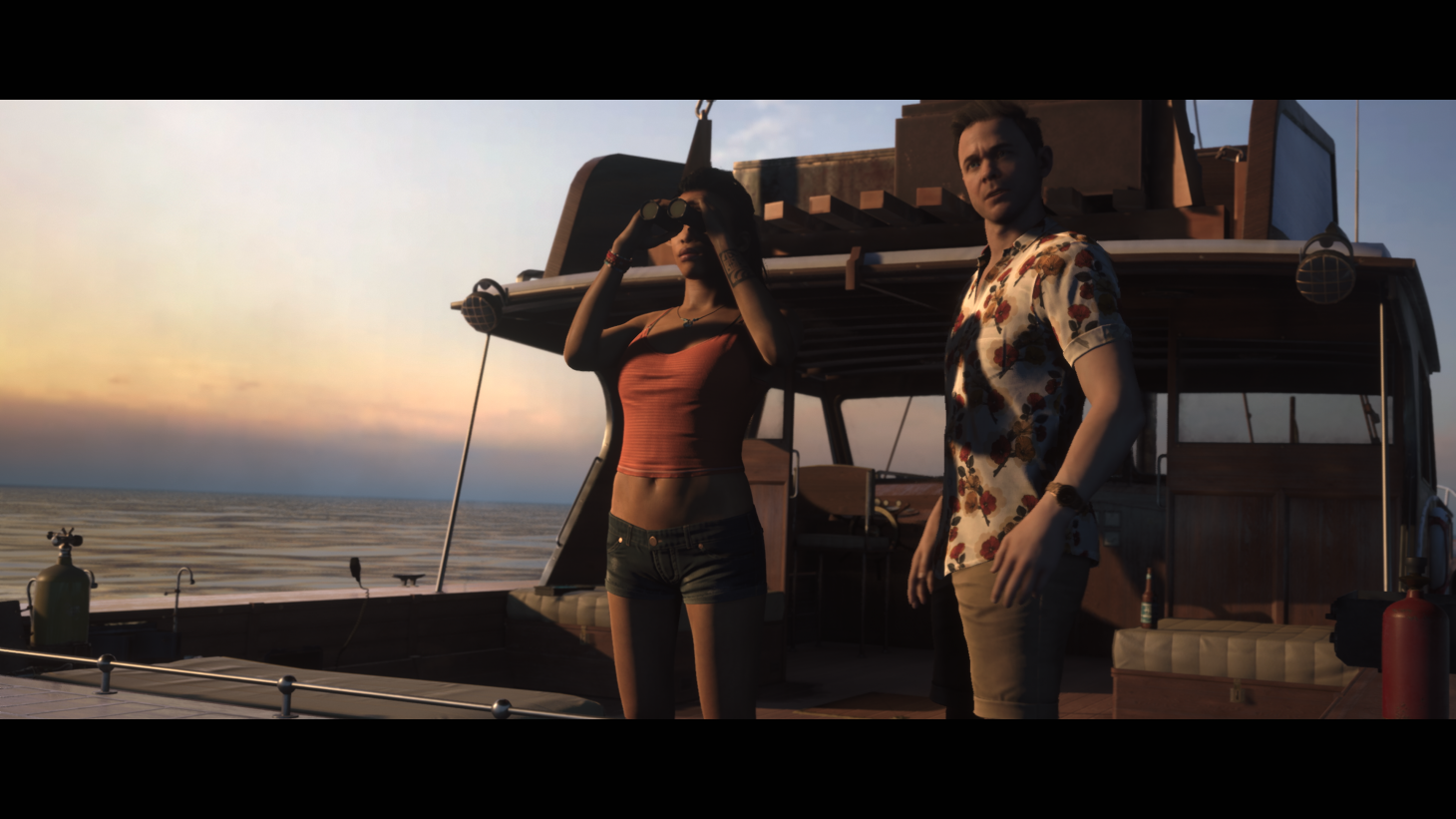 When Man of Medan was revealed a year ago, fans of Supermassive’s Until Dawn on the PlayStation 4 naturally expected a successor to that game’s mechanics and narrative. Everything that has been shown from the title until today reinforced the belief that the Dark Pictures Anthology, beginning with Man of Medan, was going to be a standard narrative adventure within the horror genre based mostly on choice. During a demo event, Supermassive revealed that there was still one more feature about the game they had kept hidden since the game’s reveal: online multiplayer.

It probably sounds a little strange and, in a way, it very much is. The game still has its single-player portion that allows a branching narrative that fans of Supermassive have come to expect, with quick-time events and decision-making driving the story. Man of Medan, and all further games in the Dark Pictures Anthology, can also be played in a new “Shared Story” mode online with one other player. Together, you and a friend participate in the story by controlling different characters as the story dictates. 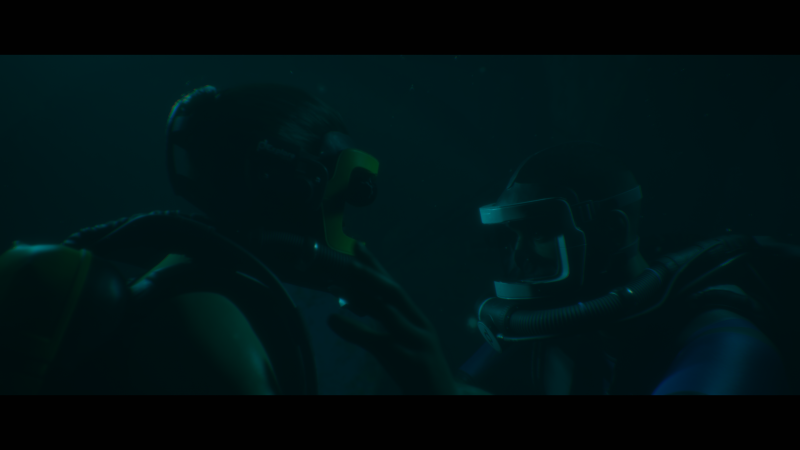 In the demo I played, I was paired up with another player from a different outlet and started the game from the beginning. While we weren’t able to use voice chat, players who play online will be able to, which is going to be fairly important to the dynamic the game wants. Throughout the narrative, the two players take control of different characters at once, sometimes interacting and sometimes splitting up, and make their own decisions.

In the setup for the game, two soldiers wake up from a drunken stupor on a battleship, allowing the players controlling them to either split up or stay together, as you do in a horror movie. The pair discover that the entire ship has been either killed or is slowly dying, and there’s a lot of creepy imagery that players might see differently depending on which character they’re playing. 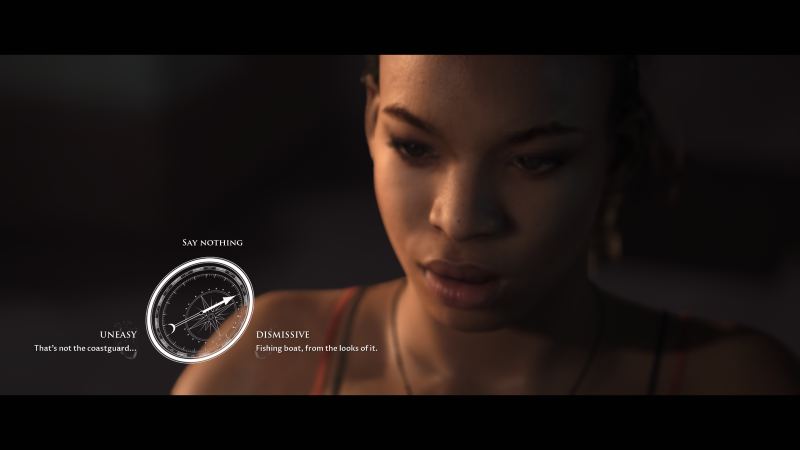 After a time skip, players take control of a group of friends looking to do some deep sea diving looking for a World War II airplane that has gone undiscovered for years. Two brothers, Alex and Brad, are preparing for the dive by having a conversation about their upcoming venture, with one player taking each side of the conversation and choosing the dialogue options from a radial menu. Brad can choose to be nervous, prompting the way Alex responds, and maybe telling you a little bit about how the players would view this situation outside of the game.

There are also times where players will split from each other entirely. When Alex’s girlfriend, Julia, joins in alongside her brother Conrad, portrayed by Shawn Ashmore, players can have entirely separate scenes. When Julia and Alex dive underneath the water’s surface, Conrad and the ship’s captain, Fliss, stay on the boat. Conrad attempts to flirt with the young captain, who can either be receptive to it or shut him down, while Alex proposes to Julia down below. As the possibly-engaged pair come back up to the boat, they see a small explosion of fire coming from the surface, and have to decide whether to risk decompression sickness to go help. From the other perspective, Conrad overzealously gases up the grill, and it fires back into his face. 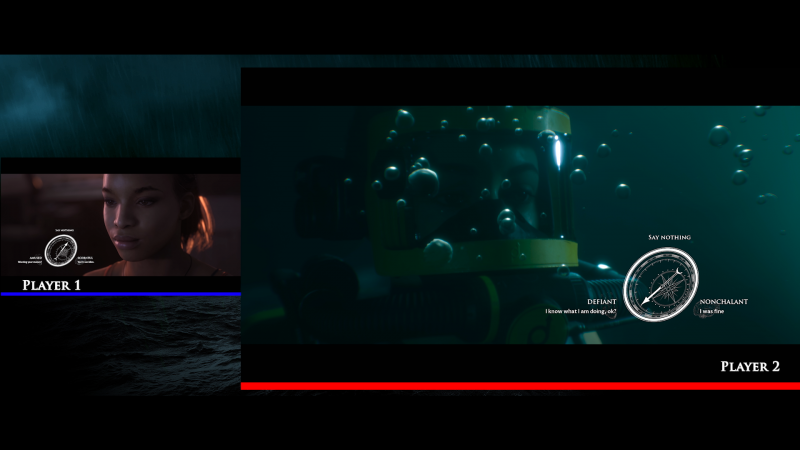 Does the player on the boat tell the other player not to worry? Is it even worth mentioning while they have their own fires to put out? Would someone want to save their own character above the other player’s favorite? There’s a lot of different considerations that make the narrative adventure more than just competitive or cooperative.

The game also has a local mode called Movie Night, which allows up to five players to get assigned a character in the story and play through it together with one controller. Supermassive says that Movie Night is inspired by the feedback they got from Until Dawn, which told them people tended to play the game together by passing the controller around and sticking to characters for specific players. Movie Night goes through the single-player path of the game, so you’ll see a bit of different scenes, like some of Fliss and Conrad on the boat and some of Julia and Alex diving below. 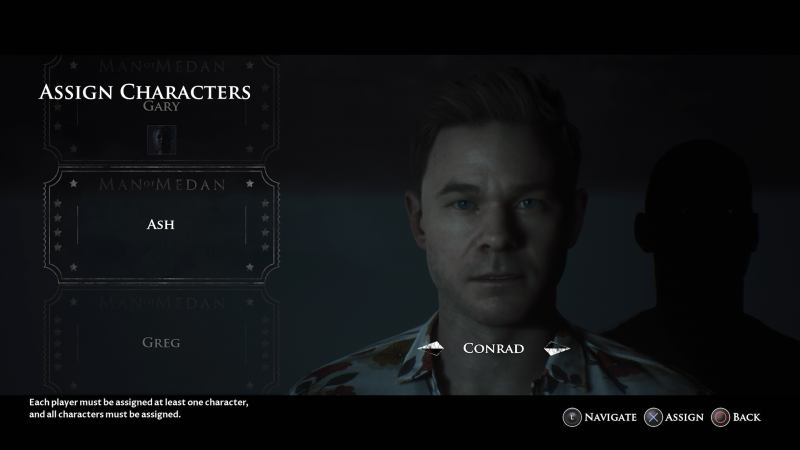 Overall, the path Supermassive chosen to bring multiplayer to what is essentially an interactive movie is a promising one. It may not be everyone’s preferred way to play through the game, but there’s different options for however someone wants to go through the narrative. You can be spooked alone, spooked online, or spooked with friends. 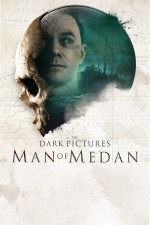