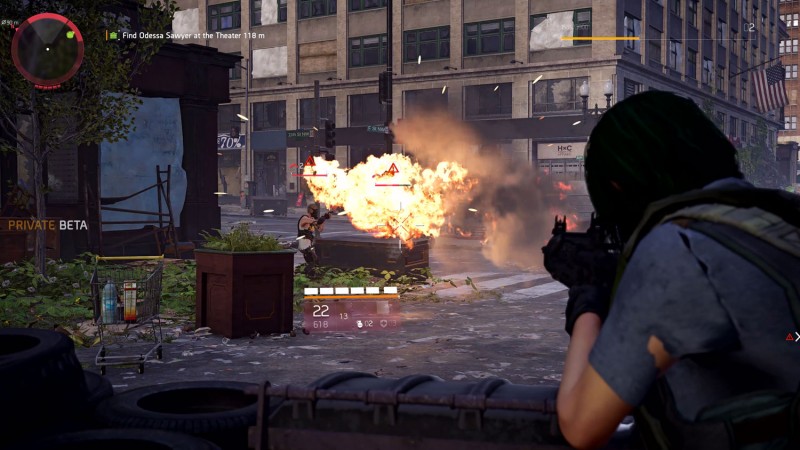 Seven months after New York City was ravaged by the Green Poison, the fate of Washington, D.C. hangs in the balance. Several different factions have arisen in the chaos, each of which has its own ideology, visual style, and way of approaching combat in the largely abandoned city streets. During a recent hands-on event for The Division 2, we got to fight several of these groups, and later got a debriefing from the creative minds behind these enemies.

When players work their way through the campaign and open world, they’ll spend much of their time battling three main factions. That’s not all the game has in store for players, however. Once the campaign is finished, another group infiltrates the world, in both endgame-oriented missions and the streets of D.C. itself. It’s an interesting way to keep the game fresh in the longterm, and it speaks to the importance that Ubisoft sees in having a variety of different groups to battle as opposed to an unending series of paramilitary clones.

“For me, that is the core building block of the game, the shooting challenge that each one of the factions and each one of the archetypes represents,” says Julian Gerighty, the game’s creative director. “The narrative wrapper is super important, but first you start off with what are the challenges in front of you. Are they organized? How do they cooperate together? Is it chaotic? You need to find these profiles, and then you sort of work on the narrative, doing a sort of top-down approach – ‘OK, it’s seven months later, who would be in this world?’ It still remains a video game, so factions are intrinsically game-y. But we need to lean into that and make it something that’s recognizable and visible, and you anticipate your strategies with the different archetypes of each faction. That’s absolutely part of the process there, and it’s something I think we’ve done super well in terms of just the fun of facing off against the factions.”

The first faction players are likely to encounter are the Hyenas. They’re fierce fighters, and their intensity is amplified thanks to use of a drug called spice. While engaging with these guys, an indicator will occasionally pop up above their head, showing that they’re in the process of cracking open some of the drug capsules. If you don’t interrupt them in time (the same way you stop an enemy from chucking a grenade), they’ll get a small health boost and an influx of artificially induced confidence. “They’re about basic stuff like assault rifles, but also about getting right in your face with batons as well,” says senior lead designer Keith Evans. “They’re basically anarchists. They’re totally the wild card in the city. ‘Everything has been destroyed, why are we trying to rebuild this? Burn it all down.’ That’s really where they’re at. They’re at the end of their rope, basically.” 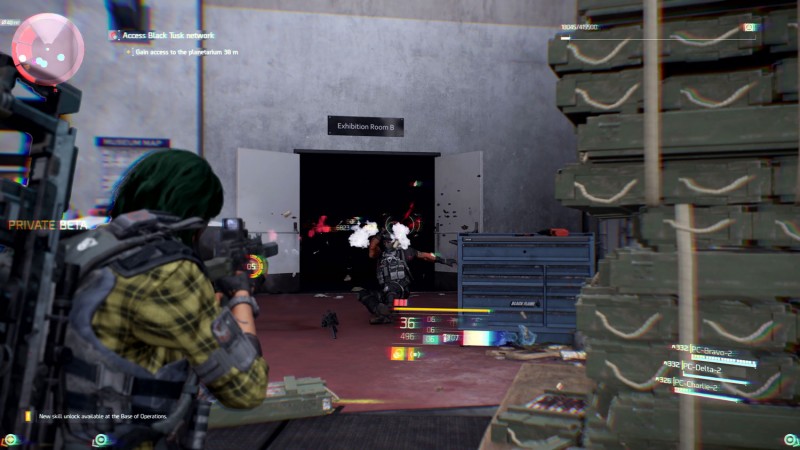 The next group isn’t quite as aggro – which makes them a little scarier. The True Sons see themselves as the rightful heirs to this new America, and they’re prepared to use force to make their goals a reality. “They’re kind of the more militaristic of the three main factions,” Evans says. “They’re a paramilitary group that banded together and are most similar to the LMBs (Last Man Battalion) from the first game. They think they can assume power, so they’re trying to take over and actually regain control of the city. They want to have a real foothold and start gaining power around the city.” Where the Hyenas are content to charge in and wreck stuff, True Sons make use of cover and work together to take down their opponents – which include the other A.I. factions.

We didn’t get to see the next faction, the Outcasts, in action, so they remain more of a mystery. Evans says they’re a group of religious extremists who have banded together in D.C. How that manifests itself to the player is something we’ll have to wait to discover.

Waiting and discovery is a huge component of the Black Tusk faction. As mentioned earlier, players won’t meet these units until the end of the game. They’re the best of the best, showing a military discipline (and quartermaster access) that’s likely to make every Division agent envious. “They fight very much like a spec-ops unit, where they’re always angling their torso toward you doing suppressive fire,” Evans says. “They never just sprint to the next piece of cover, they’re working more as a group – plus they have all the big fun toys, like the big dogs and the heavy weapons and things like that. We’re holding back on a lot of story secrets for the Black Tusks, because it’s very tied into the end of the game – I won’t say it’s a twist, but it’s something I want players to experience.”

One of the things Ubisoft was keenly aware of going into The Division 2’s development was the importance of endgame content. The first game launched with fairly anemic offerings, which were built up and addressed through an ambitious series of updates. The team behind the sequel is determined not to make the same mistakes.

“Having the Black Tusks saved for endgame is kind of a gift, personally, that’s what it feels like,” Evans says. “We had to plan for it from the beginning, it was kind of that whole idea of having that endgame focus, and it took a lot of planning to make sure we weren’t just pulling stuff from the main game. We wanted that to be meaty, and then plus plus.”

For more on The Division 2, check out our New Gameplay Today, which shows the game in action, as well as features on its cosmetics and the 10 biggest takeaways from our hands-on time with the game.