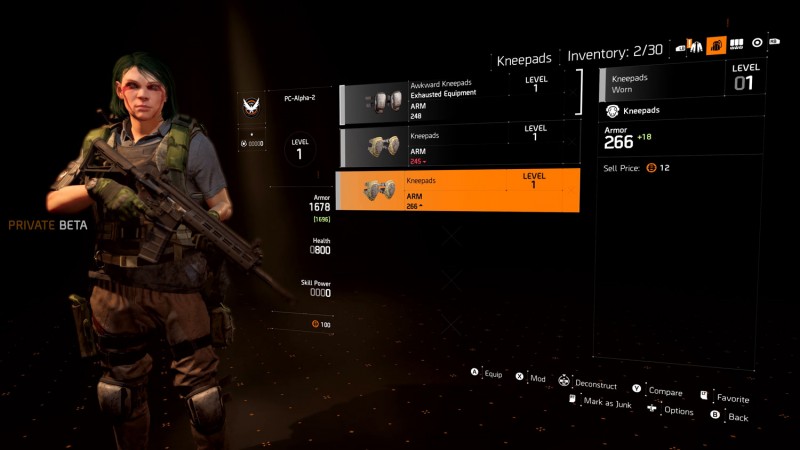 The Division’s “winter in New York City” setting was a break from the deserts and sunny summers we often encounter in shooters. It also had a big effect on the game’s character customization, with Division agents who were dressed for the elements – beanies, winter coats, boots, and all. The Division 2 shifts the action to the muggier climate of Washington, D.C. in the summer, which naturally effects how players dress for their parts.

We were disappointed that the build we played during our hands-on time with the game didn’t include cosmetic drops, but we were able to talk to some members of the dev team to learn how they were approaching that element of the game. Not everyone cares about how they look in shooters, but for those of us who enjoy that aspect, it’s interesting to see what’s changing.

“One of the things that I love, and it feeds into RPGs particularly well, is the customization and the look of your character,” says creative director Julian Gerighty. “In the Division 1, because of winter, you were kind of stuck. It was the beanie, the big jacket, and that was it. This allows us to do so much more. I think that’s important for players to see an avatar that resembles the fantasy that they want to play to.”

While that fantasy is important, Gerighty says maintaining a degree of realism is also something they’ve had to pay attention to – at least, at the beginning. “When the game first launches, we need to stick to a fantasy, and that fantasy is you’re not an elite soldier. A Division agent is you or me. It’s people who decide to do something for the greater good when disaster hits. It’s not the classic Clancy elite soldier. So this military theming, it’s something we want to shy away from. If you want to wear shorts or capris and a tank top, that’s entirely possible. If you want to go super strange and wear a Santa suit or whatever, that’s going to be fine. But not at launch.”

Gerighty recognizes that people do want to get weird sometimes, whether it’s dressing like an astronaut or donning that Santa suit, but that there’s a way to get those elements into the game in ways that make sense. “Maybe there’s a costume shop on Pennsylvania Avenue that you break into and you can find some bunny suits and some Santa Claus items – whatever – you can ground those things. At launch, because it’s a shared-world shooter, you don’t want to see a bunny go into the Grand Washington Hotel in front of you. ‘C’mon, follow me!’ [laughs] We’re still role-playing, we’re still building that identity of what this world is.”

We weren’t able to adjust the cosmetic layer, but gear such as gloves, kneepads, backpacks, and the rest was reflected on our character as we switched it up, just as it was in the first game. “In the final version, you can tweak almost everything,” says senior lead designer Keith Evans. “We’ve added more. You can pretty much change anything at will. In the first game, there were just some limitations to it; you’d put on glasses in the very beginning and they were there forever. So we’ve addressed things like that, and we’ve also added things that are gained through gameplay and achievements.”

Being able to passively brag about your accomplishments via visual flair is a fun part of gaming, and that manifests itself through new backpack trophies. “Those can be earned by doing all sorts of things in the game, like maybe achieving the max level of the conflict rank or clearing out all the missions,” Evans says. “So you get these different rewards that show off your achievements, and we’ll be adding more post-launch. It’s just a fun way to specialize your character. And there are tons of things you can find in the world – plus, it’s summer now, so there are shorts! And jean shorts that you can go out and save the world in. And sandals!”

For more on The Division 2, check out our New Gameplay Today, which shows the game in action, as well as features on its new factions and the 10 biggest takeaways from our hands-on time with the game.