Hot On The Heels Of Vampyr, Dontnod Announces Twin Mirror

In the flurry of leaks and rumors prior to E3, it's refreshing to see a game intentionally announced with a standard trailer. Such is the case with Twin Mirror, a new title from Vampyr and Life is Strange developer Dontnod.

In the trailer, a man begrudgingly returns to a small town after the death of a journalist and experiences all sort of supernatural events. It's immediately reminiscent of Stephen King or Alan Wake, the intimate setting lending itself to uneasy circumstances. The title of the game, Twin Mirror, is suggestive of another surreal small-town story: Twin Peaks.

The video offers few details on gameplay, but the glimpses of combat suggest that the game will be action-focused, similar to Vampyr or Remember Me rather than Life is Strange. 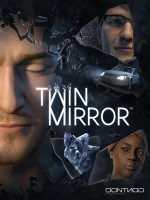