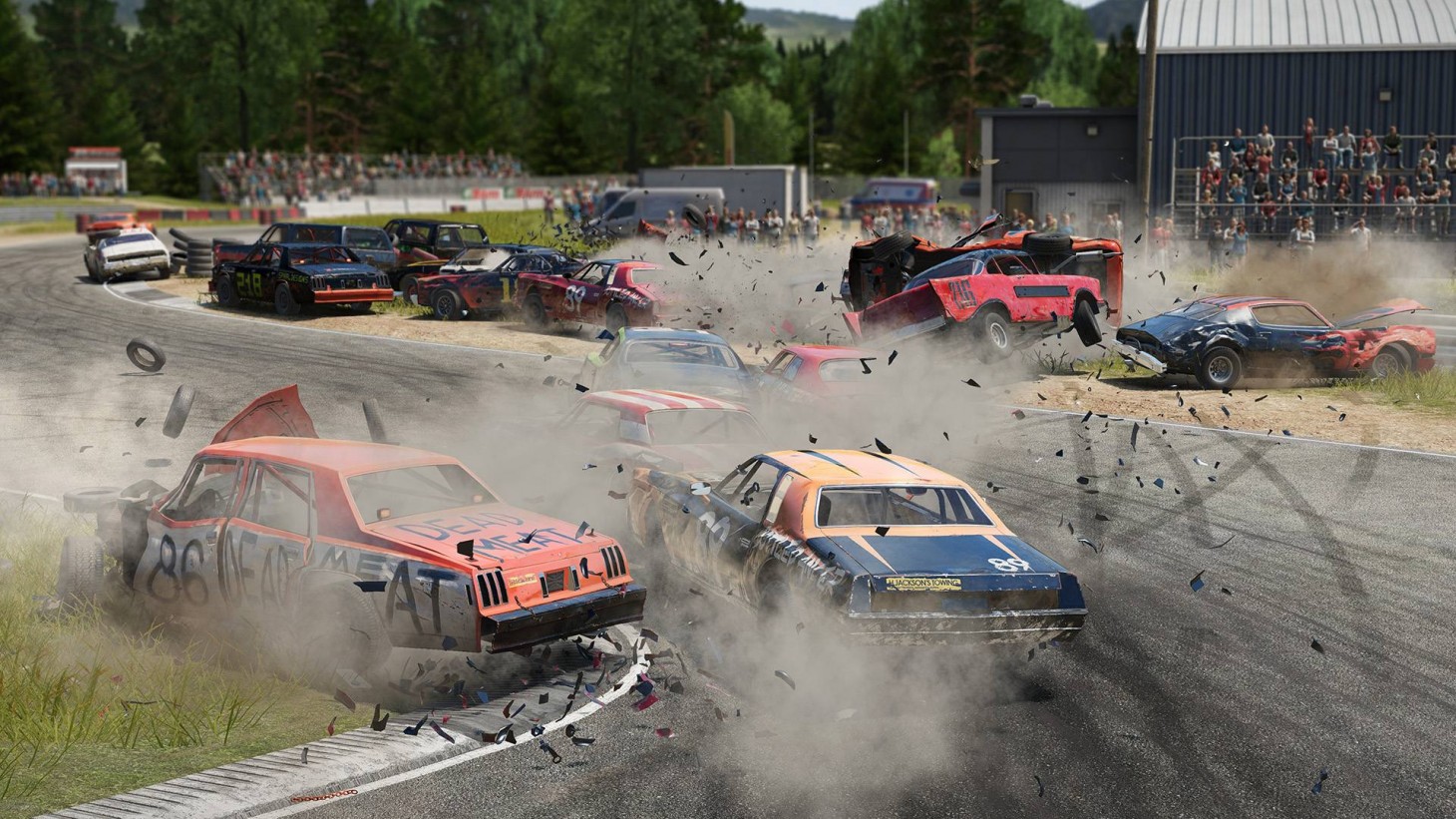 Wreckfest Review – Why Race When You Can Destroy
by Andrew Reiner on Aug 29, 2019 at 05:19 PM
Publisher: THQ Nordic
Developer: Bugbear Entertainment
Release: August 27, 2019
Rating: Teen
Reviewed on: Xbox One
Also on: PlayStation 4, PC

Most of the cars in Wreckfest look like they were hauled out of a junkyard and spray-painted to hide the rust. The detailing isn’t important here; all that really matters is that the car drives fast and can take (as well as deliver) a beating. Driving aggressively is what Wreckfest is all about, joyfully turning most races into highlight reels filled with flipping cars, pileups, and debris littering the track. Developer Bugbear Entertainment turns chaos into thrilling gameplay that makes almost every event in Wreckfest a heart-pounding delight to play.

Rather than making clean turns, some of your strategy involves deciding how much you need your front bumper, as a good, hard hit against your rivals can send them into the ditch or, better yet, flip them upside down. Wreckfest lives up to its name in most of its racing events, and the computer-controlled opponents are thinking just as devilishly as you are. They try to spin you out, and if they happen to hit you hard enough, they become an official rival for the remainder of the race.

Most of Wreckfest’s tracks appear to be designed with catastrophic outcomes in mind. Straightaways are narrow, meaning cars exchange paint just out of necessity as they navigate these spaces, and the turns are often tight or filled with tire stacks cars can ram into. Even the side banks (which are there to protect the fans) end up doubling as dirt jumps that send your car sailing or spinning uncontrollably. These are the tame courses; others are more obvious in their intent to destroy you. These tracks may feature figure eights, loop-de-loops, and a lack of safety walls for oncoming traffic. Bugbear wants you to wreck, and the excellent tracks designs and aggressive A.I. make this happen, even if you are racing your heart out for first place.

As a spiritual success to the Bugbear’s famed Flatout series, Wreckfest also includes full-on demolition derbies that pit you against 15 other vehicles. Much like Fortnite’s Battle Royale mode, the goal of these challenges is to be the last car running. As amusing as it is to see 16 cars smash into each other to start an event, the demolition derbies push you to drive in different ways, especially backwards to protect your engine. These challenges hit at the right time to shake up the flow of play.

Damage in all events is persistent, and a handy meter on screen shows you exactly what shape your car is in, meaning you may have to adapt a protective stance just to finish a race. Again, you end up playing this game in a different way than other races, yet the goal remains the same: finish in first. 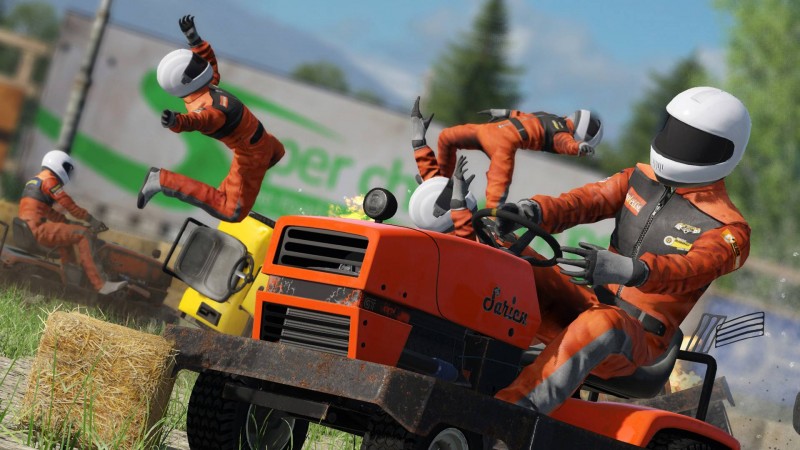 The driving mechanics are excellently implemented for the cars (making them feel like roaring weapons), and the upgrades you can give them can be felt the next time you take the track. The same cannot be said for the “gimmick” vehicles (like lawnmowers, harvesters, and RVs). Given their reduced speeds, awkward handling, or ear-piercing engine sounds, I just didn’t get into them. These vehicles are fun in concept, and add a nice diversion for one challenge here or there, but the true stars of the game are the muscle cars, which you spend the most time in, and can give different paint colors and liveries to.

Wreckfest is an old-school racer at heart. You won’t see a guide path on the road to follow, or a rewind function. I love that the game doesn’t give you any assistance, and instead pushes you to create your own opportunities, like smashing into cars to navigate turns or sacrifice a little speed to spin a rival out. 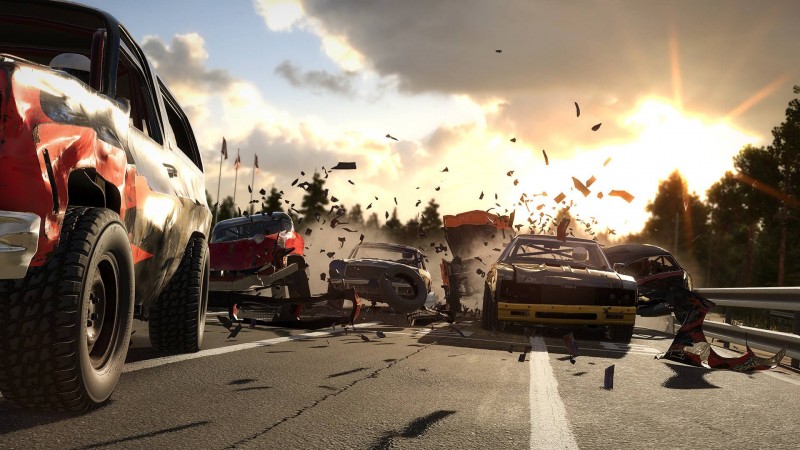 On the flipside of being old-school in design, Wreckfest doesn’t have much of a career structure. To unlock new challenges, you simply need to play what is available, and score well enough to earn points needed to unlock the next challenge or event tier. Money earned along the way can be used to purchase new rides, of which there are some fun and powerful beasts to sic against the competition. I didn’t dive into the marketplace often, however, as the event structure constantly shakes things up and often makes you drive in different vehicles. The career may not have depth, but it works well in terms of showing the player everything this game has to offer. Online play delivers almost every race or event you'll find in the campaign, but again, doesn't offer much outside of this.

The video game market is filled with racing simulations, and it’s nice to see oddities like Wreckfest that deliver the exact opposite. Why race a clean path when you can race dirty? If that proposition sounds fun to you, you can’t go wrong with this aggressive racing experience.

Bugbear Entertainment's latest racing experience is all about aggressive driving and smashing cars to bits.

8.5
i
Game Informer's Review System
Concept There can’t be a photo finish if your rival is in the ditch. Wreckfest is all about aggressive driving and smashing cars to bits
Graphics In a race’s final lap, most tracks are filled with vehicle debris and stalled cars. The damage models look good, distracting you from the fairly pedestrian tracks
Sound The roaring engines and sounds of vehicles colliding are excellent. The licensed heavy metal soundtrack is a bit much, but it can be turned off while racing
Playability The vehicles control well and deliver the proper feel and physics to initiate takedowns and spinouts. Sustained vehicle damage also can be felt over the course of a race
Entertainment Smashing up cars is fun, and Wreckfest is an old-school racer that delivers on that thrill
Replay Moderate