I placed Pokémon Platinum next to Diamond playing on another DS, and was surprised at the slight changes. Your playable characters now sport more wintry outfits. A bumbling investigator bumps into you from time to time, and the game shows you more things rather than simply telling you. For example, there's less ''Your best friend just came through here and said to meet up at the next gym'' and more ''Hey, pal, I'll see you at the gym.'' But if I hadn't done the side-by-side comparison I probably wouldn't have noticed these small tweaks on a game I hadn't played for over a year.

Fortunately, Nintendo includes a few more obvious additions. If online social interaction is your thing, you can now hang out in the Wi-Fi Plaza with up to 20 other people. Here you can have strange multiple choice conversations (''Do you want to be an A) inventor B) artist...''), stamp pokémon footprints on a board, or face off in three different multiplayer touch screen minigames. There is a time limit on how long you can stay, but nothing kept my interest long enough to warrant testing the boundaries.

Aside from the plaza and battle video sharing, most of the big time bonus content is loaded toward the end. The new Distortion World dungeon is an intriguing labyrinth of floating platforms that involves walking on walls and ceilings (breaking the camera out of its top-down view), riding an upside down waterfall, and battling it out with the ''Origin Forme'' of Giratina, the creature on the front of the box.

After the main quest, a new Battle Frontier offers plenty of tournament variations that will keep you busy for a while. As you fight trainer after trainer, you'll be subjected to rules like random good or bad status effects, using stock pokémon, spending custom battle points wisely between battles, and more.

If you haven't played Diamond/Pearl and are looking for a good RPG, Platinum is absolutely the way to go. Superfans are probably already playing the game, but the average Pearl owner should think twice before starting over with a blank pokédex to experience what amounts to about 10 percent new content. 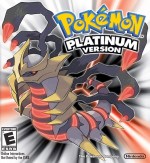