From Software's dark fantasy action/RPGs are notoriously impenetrable thanks to their steep learning curves and harsh difficulty. Last year, Dark Souls II's comparatively softer introductory hours allowed a new sect of fans to learn what makes the series so punishing and rewarding (read our glowing review). The Scholar of the First Sin edition retains the spirit of Dark Souls II, while updating the visuals to current hardware standards, rearranging enemies and items, and packing in the previously released DLC content.

At a glance, the dreary world of Drangleic seems the same as it did in the original, but little touches offer surprises of varying degrees to returning players. For example, a once-quiet river now has a deadly giant lumbering through it. A spire that once housed a single knight is now occupied by a dragon (a beast found much later in the original iteration). One encounter involves a big pack of undead soldiers filing out of a doorway like a deadly clown car - a lethal surprise for both newcomers and foolhardy veterans.

One of Scholar's most fiendish surprises is relocating a very important ring. The Ring of Binding, which softens the HP penalty for being undead, is a must-get unless you're among the most hardcore Souls players. The trek to the ring's original location is supremely punishing, and then From Software smacks players in the face by relocating the item. The rearranged enemies and items offer a neat twist, but ultimately feel more like a Master Quest-style bonus mode rather than a marquee feature. Dark Souls II's original enemy layout and pacing makes it the better way to play for first-timers, though unfortunately that's not an option in Scholar of the First Sin. You can now be invaded and aided by one more player of either alignment, bringing it up to six total players

Players who missed out on Dark Souls II's terrific DLC offerings are in luck, because all three Lost Crown packs are incorporated here. I love the enigmatic environmental puzzles, battle with a huge dragon, and other cool elements included with this post-release content. Having these add-ons available from the outset is great - even if you have to earn that access by fighting your way to them.

Dark Souls II looked great on last-gen hardware, but the occasional muddy texture or slogging framerate slightly detracted from the experience. The current-gen -iterations of the game give the entire visual side a re-invigorating shot in the arm. The silky frame-rate smooths out the process of using the camera to pan around the environment or track enemies.

Scholar of the First Sin is best suited for two types of player: Complete Souls newcomers that insist on playing with the latest hardware, and returning warriors who soaked up every bit of new game-plus content loaded into the original. While I don't think the encounters are quite up to the level of the original, it's hard to argue with more of one of 2014's best games.

Editor's note: This review is based on the PlayStation 4 version of the game. 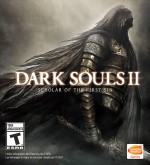 This edition retains the original while updating the visuals, rearranging enemies and items, and packing in released DLC content.

9
i
Game Informer's Review System
Concept Rerelease Dark Souls II with updated visuals, all previously released DLC, and a remixed arrangement of enemies and items
Graphics The textures and character models are crisper, and the framereate is smoother than on last-gen consoles
Sound Lots of ambient noises, pained grunts, and snarling enemies. The sparsely used score helps accentuate intense moments
Playability The most immediately accessible of the Souls series, but the rigid, deliberate combat still requires a lot of patience from newcomers
Entertainment The new enemy arrangements don’t trump the original Dark Souls II, but it’s still a great jumping-on point
Replay High