Edward Kenway isn’t like the previous heroes in the Assassin’s Creed series. While they pursued abstract goals like justice, freedom, and revenge, Edward’s motivation is more tangible. He wants money, and lots of it. He gravitates more toward the “everything is permitted” half of the Assassin’s creed, killing and plundering for his own self-interest. Edward’s devotion to the pirate’s life (and the coin that comes with it) creates a unique high-seas adventure, but Ubisoft Montreal’s desire to craft a different experience may have taken priority over making a refined one.

Assassin’s Creed IV: Black Flag replaces the towering cathedrals and expansive wilderness from previous entries with worn shanties and open water. The new ­setting, full of historical figures and an array of ­mysterious locations to explore in the waters of the West Indies, suits the series well. Ship sailing returns from Assassin’s Creed III, but as the centerpiece instead of a side activity. Almost everything you do – finding hidden treasure, attacking naval convoys, raiding warehouses – earns you money and resources you can funnel into upgrading Edward’s ship, the Jackdaw. As the ship gets better, you can sail to even more dangerous (and rewarding) areas, giving you extra loot to spend on more improvements. This loop made me want to explore every corner of the map, since it ensures that the various pirate exploits all have satisfying payoffs. Blasting through an enemy fleet behind the wheel of a heavily armored, multi-cannoned Jackdaw makes the toil worthwhile.

As fun as it is to watch your ship become more formidable, I wish I had more ways to acquire resources required for upgrades. Money isn’t in short supply, but other materials like cloth, metal, and wood also need to be collected. You can’t buy these items, so the main way to obtain them is to plunder other ships by boarding them (instead of destroying them) to steal the resources. The problem is that this process gets old quickly; I must have boarded 100 ships, and it plays out the same way each time. It’s time-consuming and boring, but a necessary step if you want your ship to stand a chance in more difficult encounters.

Navigating your vessel has improved considerably since the last entry, with tweaks that make it easier to juggle the various offensive options. The weapon you fire is dictated by the direction the camera’s facing, so looking to the side means that the broadside cannons are active, while looking over the back gets the fire barrels ready to drop. These controls work great when you’re up against an enemy ship or two, but fall apart when things get more chaotic. Because you can’t attack in one direction and look in another, getting a full picture of the battle is difficult. A fight that involves attacking a fort while fending off attacking ships or surviving a storm quickly becomes an aggravating mess. Thankfully, those fights are rare; most of your time on the water is spent casually sailing between destinations and attacking any ships unfortunate enough to be in your way.

Once you’re on land, familiarity takes over.  Edward climbs, stabs, and shoots like his predecessors. He collects various items scattered throughout the islands, does side jobs (make sure you complete the five “Templar Hunts” for some cool armor), and crafts new items and outfits. These tried-and-true elements of the franchise are still fun distractions, and you may be more desperate than ever for an excuse to delay the next story mission. Black Flag is a major disappointment when it comes to variety; the main missions all feel the same, with a tiring abundance of lame “tail the guard” and “eavesdrop on the conversation” objectives. I enjoyed the more exciting scenarios and assassinations when they surfaced, but they are vastly outnumbered by these filler tasks that highlight the imprecise stealth mechanics.

The story isn’t much better than the missions. Edward’s obsession with money and lack of personal conviction are all a part of his character arc, but those traits make the plot haphazardly bounce around for the majority of the game. Apart from his goal to find an ancient site called the Observatory, Edward doesn’t have any loyalty, purpose, or a compelling antagonist. His friends in one mission may be his enemies in the next, but the transitions are abrupt and poorly explained, as if several expository scenes ended up on the cutting-room floor. Only a few of the supporting characters are given proper development – Blackbeard is especially entertaining – leaving you wondering why you should care about various events as they unfold.

Apart from Edward’s tale in the Animus, life continues in the present day after the events of Assassin’s Creed III. You control a cipher employed by Abstergo Entertainment, but this whole section just treads water from a plot standpoint – don’t expect any significant developments. The gameplay is even worse, as you wander your office in first-person and almost exclusively work through half-baked hacking minigames. Most of this is mercifully optional, and I couldn’t hop back into the animus fast enough.

Despite my issues with the paths that are laid out before you, Black Flag is great fun when you let your impulses guide you.  Whether you want to hunt animals or unearth Mayan relics, it caters to obsessive gamers with a multitude of objectives to cross off the checklist. Plus, so many different activities are available that I could hardly sail between destinations without getting sidetracked three or four times on the way. Even though you don’t amass an empire that pays you dividends over time, hunting down the big sources of money is still rewarding.

Black Flag is ultimately better than Assassin’s Creed III (which I did not formally review). Some elements seem crafted directly in response to criticisms about the previous game. You get to the piracy rather quickly, without the need for several hours of tutorial missions. Weapon switching happens immediately thanks to the d-pad assignment, and fast-travel locations are convenient and plentiful. However, some of the same complaints resurface with a vengeance: frustrating stealth, numerous glitches, and poor performance (the framerate is all over the place on the current-gen incarnations). These flaws, combined with the disjointed story and repetitive main missions, make Black Flag a game that fails to live up to its full potential. Though Edward’s voyage isn’t all smooth sailing, the choppy waters don’t sink the ship.

Review note: We were only provided review code for Assassin’s Creed IV on PlayStation 4, Wii U, PlayStation 3, and Xbox 360. The game is also releasing on Xbox One and PC on November 19. 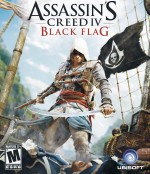 Black Flag is a unique high-seas adventure, but creating a different experience takes priority over delivering a refined one.

8.25
i
Game Informer's Review System
Concept A hotheaded pirate and his crew gain wealth and infamy on the high seas
Graphics The water looks amazing, but the framerate is unstable on current-gen platforms and Wii U
Sound The fantastic collection of sea shanties make this my favorite soundtrack in the series
Playability Changes to the fast-travel and weapon selection significantly tighten up the on-foot controls. Sailing usually works well, but steering a ship in combat is often more frustrating than fun
Entertainment Fun when you’re chasing down your interests, but the enthusiasm deflates when working through the campaign missions
Replay Moderately High