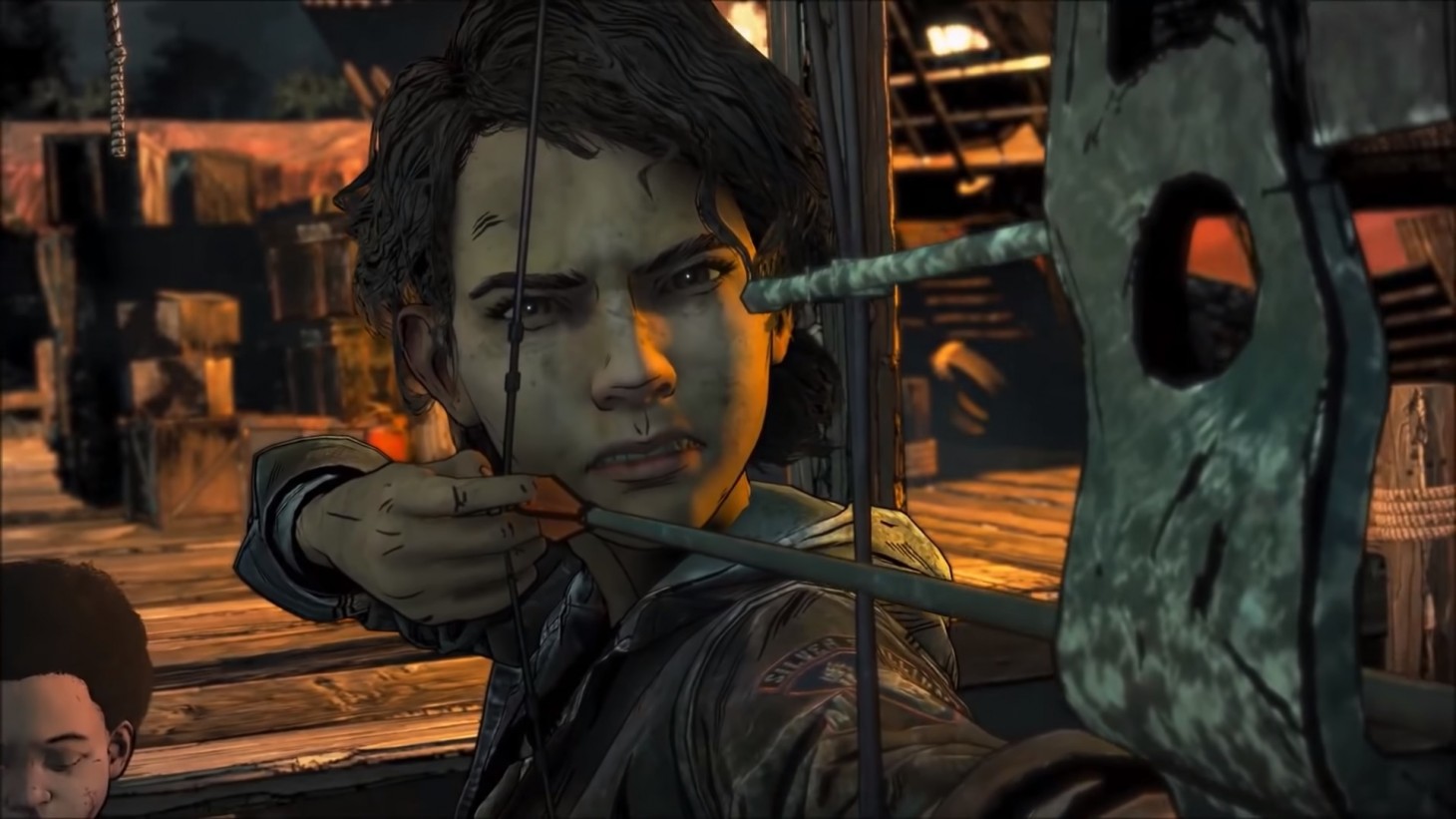 We Rank The 10 Hardest Choices In The Walking Dead Series

The Walking Dead revels in moral ambiguity. Each episode introduced us to new characters, giving us just enough time to love them (or hate them) before putting us in charge of their fates. Choice is often an illusion in Telltale games – characters’ destinies often stay the same regardless of your choices in critical plot moments – however, the studio succeeded in making each decision feel weighty and impossible.

The final episode launched in late March, and Clementine’s story is over (see how Clem’s voice actress reacted to the finale here). So it’s a great time to reminisce about the series’ most gutting decisions. Spoilers below, folks! 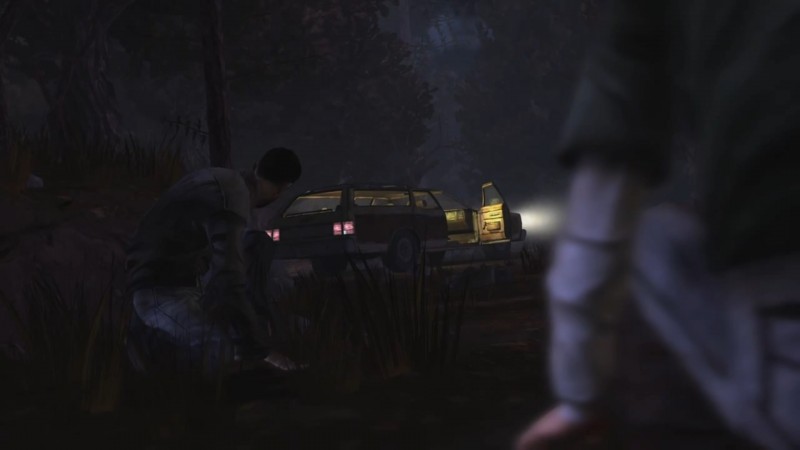 The final decision in Starved For Help comes after a traumatic episode for Lee and Clementine: their starving group takes shelter at a farm where they discover that “human” is an entrée. After surviving the cannibals, they stumble across a car parked ominously in the road. The lights are on, the keys are in the ignition, and the trunk is full of supplies. Players can choose to steal the supplies for themselves or leave them for the person they belong to, putting you in a dilemma where you must weigh the needs of your group against the needs of a stranger who may not even be alive. Regardless of Lee’s decision, the group loots the car, catalyzing a chain of events that results in Clementine’s kidnapping in the season finale.

The supplies, it turns out, belonged to a husband and wife who left their car on the street for a few minutes while they searched for their missing son in the woods. It’s a great setup for one of The Walking Dead’s best guilt trips. 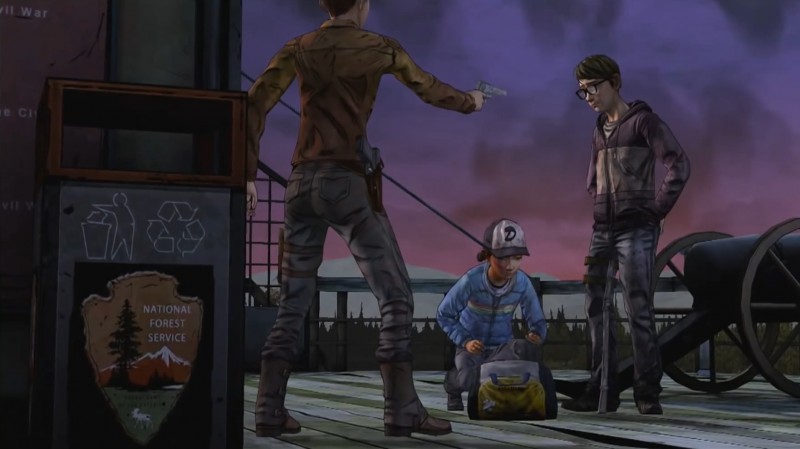 9. Stealing The Medicine From Arvo (Season 2, Episode 4: Amid The Ruins)

In Season 2, Clementine and Jane scavenge for supplies that might help them deliver Rebecca’s overdue baby. It seems like a miracle when, out of nowhere, a crippled boy named Arvo crosses their path with a bag full of medicine. Arvo says the medicine belongs to his sister, but Jane sees holes in his story, so Clem must choose whether or not to steal the supplies for their own group.

It was tough having to weigh Arvo’s unknown circumstances against Rebecca’s impending delivery, but your decision – in classic Telltale fashion – ultimately makes little difference on the outcome: Rebecca dies shortly after childbirth, and when the group encounters Arvo again (this time with friends!), the scuffle between him and Jane results in a firefight between both groups. 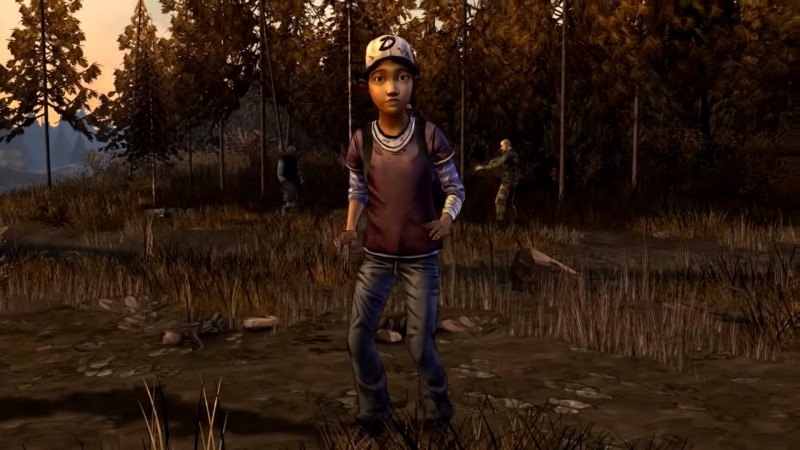 Clem has a hard go of making friends at the beginning of season two. After a dog bites her, she stumbles across a new group of survivors who suspect that the bite is actually from a walker. Nick nearly shoots her, while his father, Pete, gives her the benefit of the doubt. If you had to choose which one to save just off that conversation, the decision would be simple, but the final scene makes everything a bit more complicated: Pete takes a walker bite to the leg while he, Nick, and Clem explore a nearby stream, and then a horde approaches.

Clementine has to make a choice. Is saving Pete at Nick’s expense a lost cause, considering he’s now infected? Or should she save Nick, who doesn’t really care for Clem that much in the first place? This scenario reminded us right out of the gate in season two that this is a series where no decision is black and white. 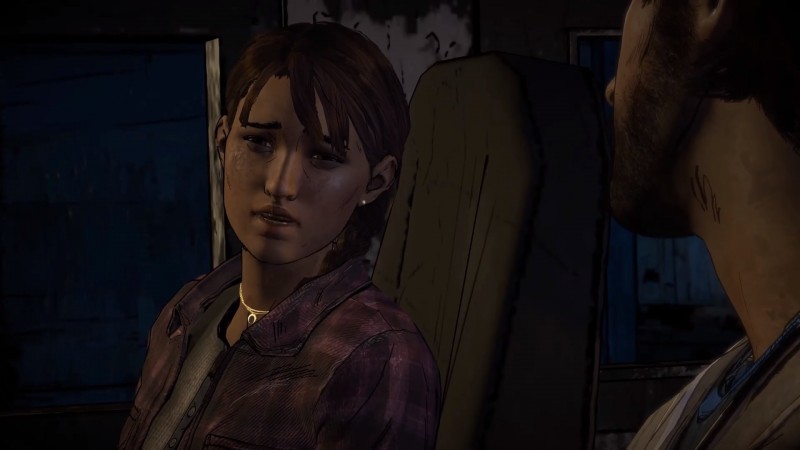 7. Falling In Love With Kate (Season 3, Episode 4: Thicker Than Water)

The Walking Dead got a major reset after season two, including a time jump and new characters: playable protagonist Javier, his brother David, and his sister-in-law Kate. David goes missing during the early days of the outbreak, so Javi and Kate group up and, well… the hokey pokey still happens in the zombie apocalypse.

In the season’s penultimate episode, after David comes back into the picture, Kate confesses her love for Javi, and players are given the option of slapping a label on it at the risk of damaging their relationship with David. Matters of the heart are always a hard call. 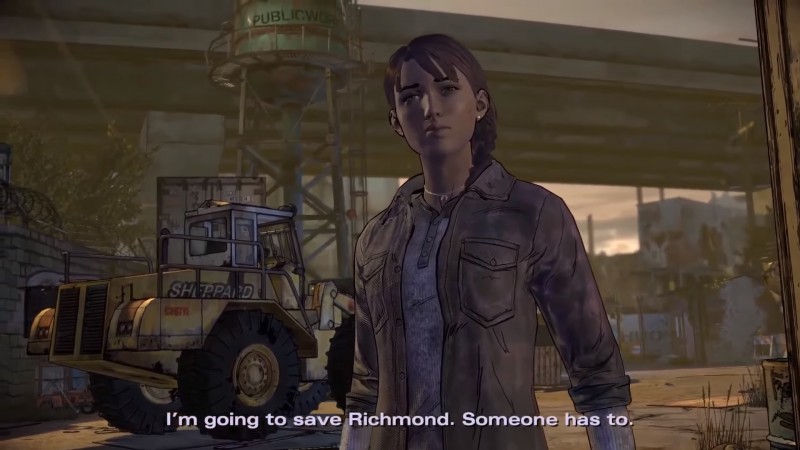 6. Help Kate Save Richmond Or Rescue Gabe And David (Season 3, Episode 5: From The Gallows)

There are some serious stakes in the season three finale. A horde of walkers penetrates Richmond, and while Javi wrestles with choices that impact the future of the community, he’s also forced to make decisions regarding his family’s fate. Kate wants to help save Richmond from the walker threat, but David wants to take his son Gabe to shelter outside the city. Javi, of course, must make a choice.

If you choose to go with Kate, David dies (which isn’t the worst thing in the world if you shacked up with her in the previous episode). If you choose to go after David and Gabe, though, you’ll come back to Richmond to find your boo-thang zombified. It’s a sad day all around. 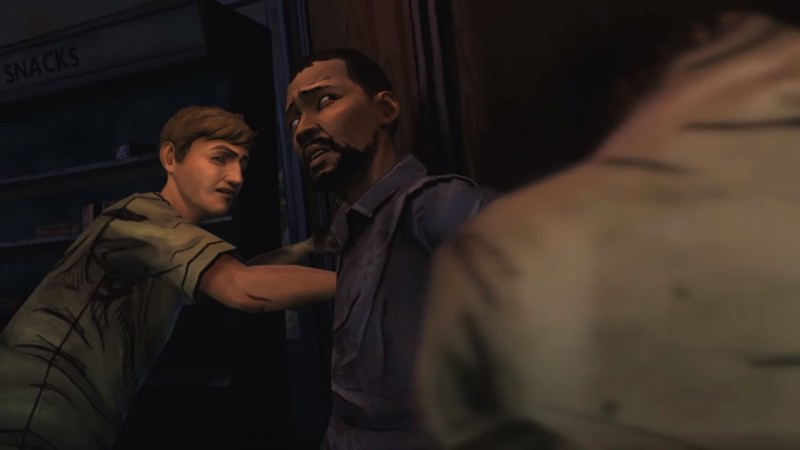 The Walking Dead felt familiar when its first episode debuted in 2012. It had dialogue trees that let you choose how kind or how sassy you wanted Lee to be. It had QTEs that added urgency to its scenes like other action games. But it was the season’s climax that earned the series its place in the pantheon of standout video game narratives, by way of a choice: Lee and his group of survivors are pinned in a convenience shop by an encroaching hoard, and for the first time in the series, the player’s actions directly determine the fates of your friends Carly and Doug. The novelty of the idea, that choosing one friend results in the death of the other, made this choice incredibly tough and affords it its place on this list. 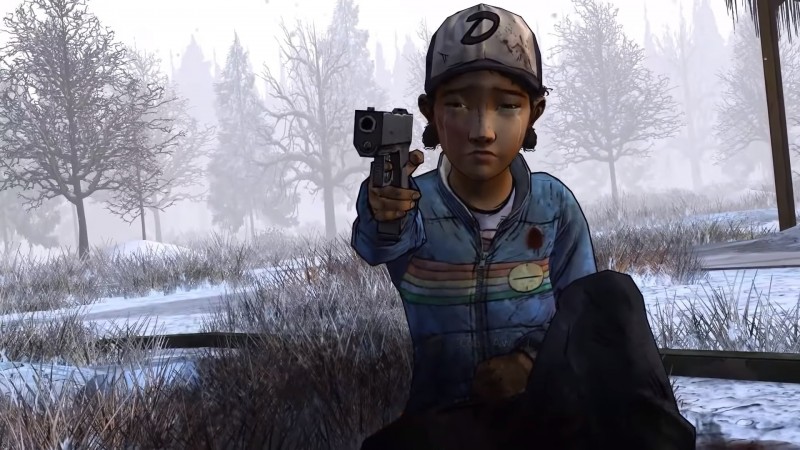 This one is a doozy.

Lee and Clementine traveled with a friendly, bearded man in season one named Kenny who tragically loses his son to a walker bite and his wife to suicide. Kenny’s fate is uncertain at the end of the season when a mob of walkers separates him from the group. In season two, though, he reunites with Clementine at a ski lodge, but she can tell something in him has changed.

Clem’s arc in the second season also involves her relationship with Jane. She teaches Clementine how to safely take down walkers despite her size and how to loot them for supplies. Jane is a survivor, Clem learns, and those instincts put her at odds with Kenny, whose mental stability everyone is questioning throughout the season.

In the final episode, the group is gone, and the only people who remain are Clem, baby AJ, Kenny, and Jane. Kenny becomes aggressive, and he and Jane engage in a brutal brawl while Clementine stands to the side. At one point, Clem picks up a gun. She can shoot Kenny, her longtime friend, or not intervene, allowing Kenny to kill Jane. It’s one of the series’ decisions that causes the most second-guessing after you make your call. 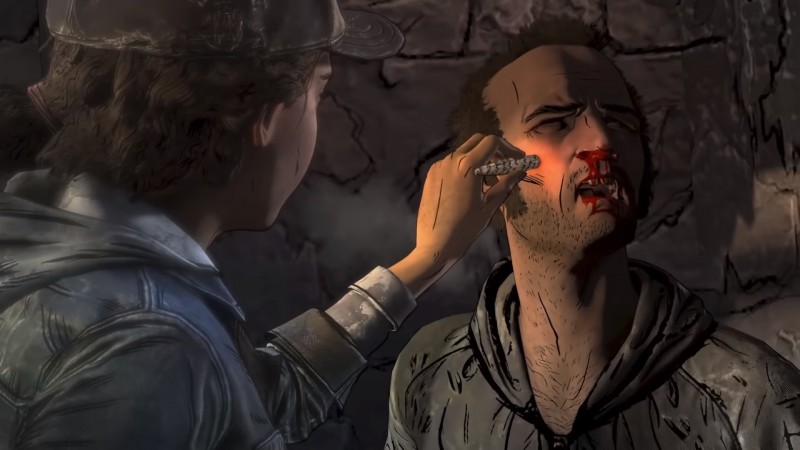 Each of these decisions pales in comparison to those you’re forced to make in The Walking Dead’s final season, because the brunt of them involve a subject no one finds easy: parenting. Clem makes decisions throughout the season that we’re told impact the type of man AJ will grow up to become. Low impact decisions – like whether or not you’ll let AJ start swearing – don’t carry much influence over the course of the season, but some scenarios, like the opening to Broken Toys, do.

A group of bandits attack Clem’s home, and she and her friends takes a grunt named Abel prisoner. Players must interrogate him while AJ observes, adding extra weight to choices you make. Will you be the good cop and risk not learning valuable information? Or will you play bad cop – beating Abel’s head against a desk or burning his cheek with a lit cigarette – and risk AJ becoming more violent? This scene is a reminder nobody needed: Parenting is hard! 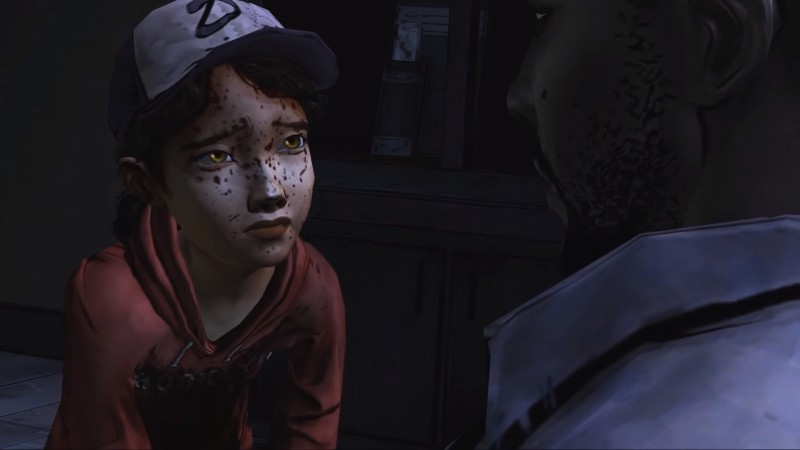 You can attribute a lot of The Walking Dead’s success – the first season won Game of the Year in 2012 at the Spike Video Game Awards – to its emotional season-one finale. A walker bites Lee, and in one decision, players choose whether or not they’ll amputate his infected arm to try and save him. Either choice is futile, because the infection has already spread too far. You can’t save Lee.

In the season’s final scene, Lee gives Clementine a choice: shoot him, or leave him to turn. In-game statistics show that the majority of players choose to kill Lee, so while the decision isn’t very divisive, it still draws on the intense emotions players develop for the two characters throughout the season, making it one of The Walking Dead’s hardest choices. 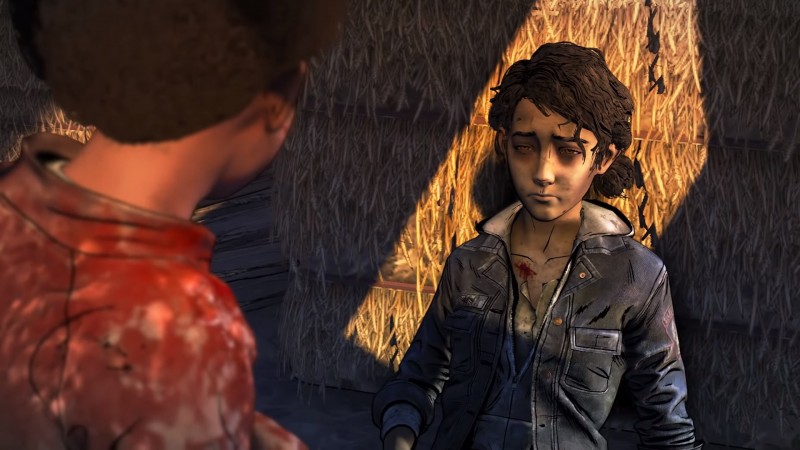 Choosing whether or not to kill Lee is a cakewalk scenario compared to the series’ final choice. As they scuffle up a rock wall to escape a group of walkers, one sinks its teeth into Clementine’s lower leg. The zombies are closing in, and there’s no time to amputate it, so Clem and AJ are forced to ignore the bite until, finally, they find shelter in a nearby barn.

The game puts players in control of AJ now, and mirroring the scene between Lee and Clem in the season one finale, Clem gives AJ a choice: kill her or let her turn. Why is this scenario harder than the scene that inspired it? Because instead of a gun, the only weapon AJ can use is the axe… The moment carries incredible weight, forcing players to decide the fate of a character they’ve watched evolve in-game for seven years. After you give AJ your order, though, he makes his own choice: He cuts off Clementine’s leg, despite your decision. She survives. The Walking Dead, shockingly, gets a happy ending.

Were there any choices you struggled with throughout the series? Let us know your decision hottakes below. Make sure you read our interview with Clementine voice actress Melissa Hutchison, where she tells us how she reacted to the final episode. You can check out our review of the final season here.