The Atari classic re-launches as a fast-paced rail shooter on your downloadable platform of choice. Juggling different weapons and dodging enemy fire makes the gameplay feel frantic and exciting, but too little enemy and level design variation hold this competent shooter back from greatness.

It seems like a strange adaptation, shifting the classic but extremely unusual Atari game to a modern-day rail shooter. But really – what else would you do with this wacky franchise, which originally seemed to star a giant fly dodging laser blasts? The new iteration stars a powerful female warrior with heavy anime overtones to her design. On a journey to defeat a legion of aliens, she is also on a quest to learn more about herself. It’s an eclectic and oddly philosophical little story, but that very weirdness is what makes it interesting. The visual universe and character art are quite attractive and well realized, which gives some weight to the story.

As for the gameplay, I found myself genuinely enjoying the shooting for the first couple of levels. It’s at that point that some of the monotony starts to set in, as there really aren’t that many baddies to choose between. Still, I like the different weapons you have and the desperately fast speed that everything flies by. The gameplay would feel a lot more even if the difficulty was balanced more reasonably. Easy is too easy, but normal jumps up in challenge dramatically, and you’ll be looking at a real slog to get past some of the bosses. Hardcore shooter fans won’t take that as a complaint, but a recommendation.

The ability to play through cooperatively with a friend is a nice bonus, but it’s one of the only extras worth much in the whole package. That’s a problem when your game is only a few stages long, and it is easy to complete in an afternoon. For folks longing for a rail shooter in the vein of Panzer Dragoon Orta or Sin and Punishment 2, Yar’s Revenge can definitely scratch the itch, even if it doesn't quite match the quality of those other experiences. 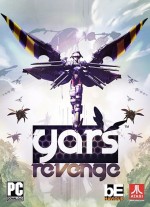 The classic Atari franchise returns in a simple but effective rail shooter.

Purchase More Info
7.5
i
Game Informer's Review System
Concept Fly through strange alien landscapes while blowing up insect-like opponents
Graphics Pretty visual effects and a unique animation style help the game to look quite striking
Sound The expected mix of sci-fi sounds and music fit the bill
Playability It takes a while to get used to juggling the different weapon types, but the controls come together quite nicely
Entertainment A fun little journey, especially if you can find a buddy with whom you can enjoy co-op
Replay Moderately Low