Practically any game can catch my attention with the words “It’s like Metroid.” Of course, a conceptual tie to Nintendo’s classic series isn’t a free pass, but the time-tested formula is a great place to start. In the case of Xeodrifter, it serves as a solid framework to deliver a compact and entertaining retro adventure, though one that doesn’t venture too far off the map.

You control a space-faring nomad whose ship has a broken warp core, so you need to gather components from nearby planets. The plot never develops or gets more complex than that, but it doesn’t need to. After the brief introduction, you are set loose to explore, and that’s when the fun begins.

Four modestly sized planets are just waiting for you to find their hidden items and secret passages. Xeodrifter clings pretty closely to Metroid’s methods; your access to various areas is gated off by your progression in other places. For instance, you can’t progress far on one world without the submarine, which you need to obtain by defeating a boss elsewhere. The slow unfurling of the various maps is fun and satisfying, especially as you revisit old areas to use your newly acquired power-ups.

The abilities that allow you to access new sections of the map are clever and interesting. The obstacles aren’t just doors that you need to shoot with a different kind of gun (well, one of them is). Instead, you get new mobility options that make all of your exploring more interesting. In addition to the aforementioned submarine, you also earn a dash, a rocket jump, and wall-phasing. Those are all fun to use, but the ability to move between the background and foreground maps isn’t prevalent enough to add much dimension.

Instead of picking up predetermined special weapons, your nomad’s power increases by gathering gun pick-ups. Each one gives you a point to allocate in one of several categories – like power, spread, and speed – that modify your basic projectile. These points can easily be reallocated, and you can swap among a few different configurations, giving you plenty of freedom to experiment and customize. I personally focused on shot power and speed, and quickly got a sense of my improving survivability – especially since the opening sections require you play carefully and conservatively until you beef up a bit.

Xeodrifter is short (you can expect to finish in a few hours), but that doesn’t bother me. However, the lack of variety is an issue. The four worlds have different tilesets and color schemes, but they don’t have much in terms of atmosphere. Even worse, all of the boss battles involve the same creature with slightly different attack patterns. The predictability deflates the thrill of what could have been memorable encounters, and had me eager to just kill the bad guy and get on with it.

Even though the routine is familiar, Xeodrifter still provides fun exploration augmented by nostalgia. A game doesn’t need to be groundbreaking to be entertaining, and Xeodrifter does an admirable job following the prescribed orbit of the classics in the genre. 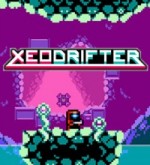 Even though the routine is familiar, Xeodrifter still provides fun exploration augmented by nostalgia.

Purchase More Info
7.75
i
Game Informer's Review System
Concept Metroid-style space exploration with a focus on mobility rather than firepower
Graphics Retro visuals make this feel like a title that would have been at home on the SNES
Sound Cool sound effects, but nothing about the music stands out
Playability Controls are simple and responsive, meaning that you deserve any damage you take
Entertainment Xeodrifiter is a fun, by-the-book way to get your fix for this niche style of gameplay
Replay Moderate