Ayumi is a sassy treasure hunter who prefers to explore by herself. Nobody holds her back, and she doesn't have to split any loot. After playing through X-Blades, I'm confident that most players would be well served leaving her alone, too. It's a shame, since there should be plenty to love. Unfortunately, the good parts like the unlockable skills are obscured by generic enemy designs, monotonous combat and the most tedious boss battles I've seen. Enemies - and their annoying spawn pods - take way too long to kill unless you pause the action and remap the controls for the nth time, making combat more of a chore than a thrill. Worst of all, before the end credits roll, you have to trudge through the same uninspired levels twice. 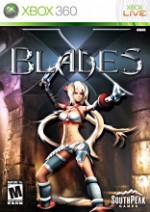