Professional wrestlers participate in a lot of matches throughout their storied careers, but none are more important than Wrestlemania. The most successful, longest-running professional wrestling event in the world, ''The Grandaddy of Them All,'' is the WWE's premier event. SvR 2009's new Road to Wrestlemania mode touches on its importance by following seven different wrestlers on their journey to the main event [full disclosure: this story mode was written by former GI staffer Justin Leeper – Ed].

Some might be disappointed that you can't take any professional brawler into this story mode – the Undertaker, CM Punk, Chris Jericho, Triple H, and John Cena are the featured wrestlers, with an extra co-op campaign featuring Rey Mysterio and Batista. However, these segments stay true to the real-life personalities while paying homage to the wrestling drama it mimics. This is a big improvement over last year's 24/7 mode, and I hope it makes a comeback next year.

While Road to Wrestlemania is a nice diversion, the real multiplayer draw is the new tag team match. Friends can build up their momentum and attributes together to perform devastating double team moves and finishers. A new inferno match even heats up the action by lighting the ring on fire.

Among its myriad create-a features, SvR 2009 finally introduces a create-a-finisher mode, giving you more than 600 animation sets to construct brand new moves to put the final hurt on your opponents. Yuke's has even thrown in a highlight video creation system to round out the set, letting you create short reels using a built-in video editor.

SvR's great right stick grapple system hasn't changed much in the last few years, so it's hard to say the series has evolved much on the mat. I'd still love to see a tutorial system to help newcomers ease into play. But I have a feeling this game appeals primarily to the male soap opera crowd, and SvR still has plenty of high class drama and sweaty mat action to please them.

8.5
About Game Informer's review system
Concept
The king of the ring returns, ditching 24/7 in favor of a stronger story mode
Graphics
The in-ring action looks good and some of the animation and hit detection problems from last year are fixed
Sound
Same as it ever was, a solid rock soundtrack backs up the annoyingly repetitive commentary
Playability
SvR's controls have a learning curve, but you'll be dominating the ring in no time
Entertainment
THQ will offer further support for the game with future downloads
Replay
Moderately High 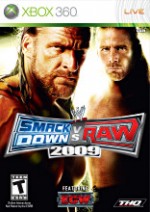