If Andre the Giant's betrayal of Hulk Hogan before Wrestlemania III brought tears to your pre-teen eyes, if Mike Tyson's appearance at Wrestlemania IV still gives you chills, if you find yourself pining for the days when gaudy mangers could meddle with the outcome of a match, then Legends of Wrestlemania is for you. This collection of what made wrestling cool in the '80s and '90s lets hardcore fans relive the exhibitions of more than 40 larger-than-life WWE legends and their managers. But what's most impressive about this fan service title is how easily it will rope in non-fans.

The real superstar in Legends is the featured Relive, Rewrite, Redefine mode. This feature lets you reenact classic matches from WrestleManias I through XV, and in some cases, change history. Two minute introductory movies precede each historical match. These montages are comprised of actual televised footage, and do an amazing job of not only bringing newcomers up to speed, but of getting fans fired up about these classic rivalries. During the matches, mini-objectives reward you with points for performing moves from the real match. The closer you come to recreating the event, the closer you'll get to that gold medal.

Legends' control system has been trimmed down to the four face buttons, giving the action a quick, arcade-like feel. While it isn't as robust as Smackdown vs. Raw, these brawlers still know their way around the ring. Context sensitive actions, unique finishers, and a few out of the ring weapons help give each match some diversity.

The beauty here is how much research has gone into the presentation. Despite the over-the-top graphics, the game almost feels historic in its recreation of classic arenas, wrestlers, and signature ring entrances. Yellow text displaying each wrestler's name even scrolls across the bottom of the screen emulating the older broadcasts, which makes the commentary from the modern-day team of Jerry ''The King'' Lawler and Jim Ross slightly jarring. It's also strange to see these legends collide in the ring, watch their mouths animate with hatred, yet hear nothing spew out. I understand that getting audio samples for all of the characters is impossible, but any voice work – even soundalikes – would have made the exchanges less hollow.

The game's not perfect – the camera can get a little wonky whenever you move out of the ring, your AI opponents sometimes perform cheap comebacks from out of nowhere, and the button-mashing combat won't satisfy everyone. Still, this is a no-brainer for anyone who still has a yellow Hulkamania shirt tucked away in their closet. And even those who associate Hulk with a green-skinned Lou Ferrigno shouldn't immediately turn away. Legends of WrestleMania is a history lesson you won't sleep through. 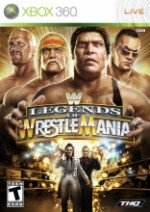 WWE Legends of Wrestlemania
Purchase More Info
8.5
i
Game Informer's Review System
Concept Wrap up everything that was ever cool about wrestling and package it in a slightly pared down grappling game
Graphics The Legends character models are exaggerated, but the crowd could use some work
Sound Jerry Lawler and Jim Ross do a fine job, but it would have been nice to hear a few more classic sound bites
Playability The simplified controls don't offer a lot of depth, but they're still fun and easy to pick up
Entertainment Anyone with a cursory knowledge of professional wrestling will get a kick out of the historical match ups, but even newcomers might find themselves surprisingly enthralled
Replay Moderate