Vince McMahon’s WWE is the only big-name game in town when it comes to pro wrestling options, and the Smackdown vs. Raw series has been the only real choice for gamers in recent years. Thanks to THQ San Diego, wrestling fans that want a little more silliness and a lot less realism now have another option. WWE All Stars takes the biggest names of the '80s and '90s and pits them against the superstars of today, allowing sports entertainment fans to create numerous dream matches.

One look at the roster reveals a who’s-who of the last three decades of wrestling. All-time legends like Bret Hart, Stone Cold Steve Austin, and The Rock populate the Legends side of the character select screen, while today’s best like Randy Orton, CM Punk, and The Miz round out the other half. Most surprising is the inclusion of Hulk Hogan and Randy Savage, as the former is currently employed by TNA and the latter has a notoriously rocky relationship with Vince and the WWE. There aren’t many big names excluded, outside of some notables like Ric Flair, Chris Jericho, Mick Foley, Kevin Nash, and Jerry “the King” Lawler.

Considering Smackdown vs. Raw is still being released every year, it’s important to differentiate this new IP in as many ways as possible. THQ San Diego succeeds in this regard, as the visual style and gameplay feel like they’re from an entirely different world. Triple H and Sgt. Slaughter are larger-than-life figures in real life, and they’ve been blown up to even more cartoonish proportions. Undertaker’s Tombstone Piledriver is a devastating finisher when he’s pulling it off on Monday Night Raw, but he performs it with an insane 20-foot leap in All Stars.

Building up to finishers requires you to beat your opponent down in a variety of ways, and your moveset changes drastically based on which of the four classes you’re playing as. Acrobats can bounce around the ring and springboard off of the ropes, Big Men can charge massive hits that send opponents out of the ring, Brawlers are the most well-rounded, and Grapplers can chain several holds into one combo. Once you’ve done enough damage to your opponent, your meter fills and you can perform a Stunner, Perfectplex, Sweet Chin Music, or whatever other finisher your character possesses. Resembling a fighting game more than a wrestling simulator, matches in All Stars are usually wrapped up in as little as four or five minutes.

Gameplay relies heavily on reversals, meaning you’ll spend a good deal of your time staring at the HUD waiting for prompts to appear. It can be frustrating taking on the AI, as something as simple as an Irish whip can take numerous tries thanks to the frequency of reversals. Timing these correctly is crucial, and it takes a good deal of time before you’ll become familiar with the proper window for the button tap.

While the gameplay is fun despite its simplicity, All Stars disappointingly offers only a few modes. There is no real career mode, only Path of Champions and Fantasy Warfare. Both of these are glorified exhibition matches, essentially. Three Path of Champions arcs are available, but they’re nothing more than 10-match gauntlets with some brief promos sprinkled throughout. These promos are basically Randy Orton, Undertaker, or D-Generation X spouting generic dialogue along the lines of “You think you can beat me? I don’t think you can beat me!” to the camera. Matches in the gauntlet are never really tied to your final opponent. Even something as simple as fighting through Undertaker’s past Wrestlemania victims before taking him on would be better than this. The D-Generation X storyline exclusively consists of tag matches, but it’s inexplicably limited to single-player.

Fantasy Warfare pits legends against current superstars, and each match has a specific theme. Steve Austin and CM Punk battle to see who the better role model is, while Sheamus (“the Celtic Warrior”) and the Ultimate Warrior take each other on for the title of greatest warrior. The only thing separating these from standard exhibition matches are the hype videos that play before the bout. These resemble the promo videos that WWE airs before a pay-per-view, and should appeal to big wrestling fans.

All Stars is a game that could have been much more than it is. Its striking visual style and focus on over-the-top action should have been a perfect fit for the wrestling world, but the lack of variety brings down the overall experience. With no mode feeling like anything more than a glorified series of exhibition matches, it seems like less than a full game. I hope that THQ gives this formula another shot, because it could be a great companion series to Smackdown vs. Raw if it comes back with a more substantial experience.

7.5
About Game Informer's review system
Concept
Bring together two generations of WWE superstars in an action-packed battle
Graphics
The colorful world of pro wrestling is even more exaggerated, with superstars resembling action figures more than human beings
Sound
Jim Ross and Jerry Lawler are reunited for commentary, and the in-ring effects are predictable
Playability
Each of the four classes handles distinctly, and there are many opportunities for reversals and combos
Entertainment
Most of the gameplay is solid, but the lack of modes and variety brings down the experience
Replay
Moderate 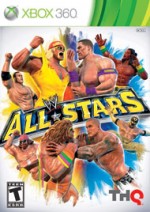