Wrestling fans’ first experience with this year’s WWE 2K lacks the impact of a well-placed chop in the corner. Despite the series’ new-gen console debut next month, 2K enters the ring first with the PlayStation 3 and Xbox 360 versions, which aren’t what fans may have been expecting (see sidebar).

Gameplay mechanics should feel familiar to fans of the series. The fast strikes, liberal counters, and long-running grapple systems all return. With knowledge of previous games you can easily pick up and play right away. If you are new to the series (or can’t quite remember some of the more specialized maneuvers), a handy listing of how to pull off the required and optional career match objectives appears at a press of the pause button. Glitches were rare in my time with the game, but noticeable. Shawn Michaels’ hair spiked out crazily, John Cena somehow got back in a cell after I had locked him out, and I saw occasional awkward physics flubs.

Character models here on last-gen range from solid (The Rock) to strange (John Cena’s froggy face with bulging eyeballs). Fans accustomed to the stacked rosters of the last couple of years will notice the total character count has been pared down, with far fewer old-school legends due to the more modern timeline in this year’s campaign.

The 2K Showcase mode replaces last year’s focus on the legacy of Wrestlemania. The two storylines on display cover the rivalries between John Cena and CM Punk from 2011 to 2013 and Triple H and Shawn Michaels from 2002 to 2004. In an entertainment medium that always juggles a multitude of storylines at once, it’s a nice change of pace to hone in on two guys at a time and follow the ups and downs of their rivalries. WWE’s excellent HD video packages return to tell the story of the real-life events and build up excitement for the matches. These combine with mid-match, in-game cinematics (complete with genuine audio from the events) that trigger when you complete objectives to capture the drama of how things went down.

Not every match feels as important to the story, however, with a few filler Raw entries added to round things out. These shake up the career with match variations and the opportunity to play as wrestlers outside of the marquee stars who were sucked into the feud. While I appreciated the break from controlling and battling the same four guys over and over, the epic vibe was lacking in certain matches. It’s tough to compete when last year’s career was loaded with some of the biggest moments in wrestling history on the grand stage of Wrestlemania.

As a fan of WWE’s developmental league, I enjoyed the inclusion of NXT content. PS3/360 players receive an exclusive Who Got NXT mode. Five NXT wrestlers have four matches each and once they’re all completed you get to fight a powerful John Cena boss battle. Due to the constantly changing WWE world, two of these characters have moved on to the main roster while one, Corey Graves, hasn’t been seen in months. If we’re pulling from that time period, why not have former NXT women’s champ Paige? She was instead designed as a season pass bonus DLC character, and her rival Emma is part of another DLC pack.

The fancy video packages and in-ring cutscenes aren’t included to help tell the stories behind these real-life matches, which makes it hard for those unfamiliar with NXT to get drawn in. That said, I’m down with the matches selected, as they show off key NXT moments like championship changes and represent the tone of the featured wrestler. For example, Rusev’s objectives are all about squashing his opponents, while Bo Dallas is encouraged to cheat as much as possible. The jarring difficulty levels are all over the place here compared to the more natural difficulty curve in the main 2K Showcase career.

Most of the wide-ranging customization options for things characters, arenas, and championship belts are intact with few changes. Missing in 2K15 is the ability to create special moves and the story designer, which were present in 2K14. Those options aren’t super huge omissions for me personally, but I can see hardcore creators getting frustrated about it. Universe mode still allows you to edit the calendar, sim or play matches, and make or break tag teams. The new story collection allows you to unlock wrestling tropes and apply them to rivalries, but it doesn’t change things much.

This version of WWE 2K15 works if you’re not planning on buying a new-gen console anytime soon, are a big fan of the careers of the four leads, would like to play the exclusive Who Got NXT mode, and like the mechanics just the way they are. Custom creators, on the other hand, might as well continue to build up their creations on 2K14.

This review applies to the PlayStation 3 version of the game. 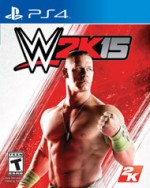 2K enters the ring first with the PlayStation 3 and Xbox 360 versions.