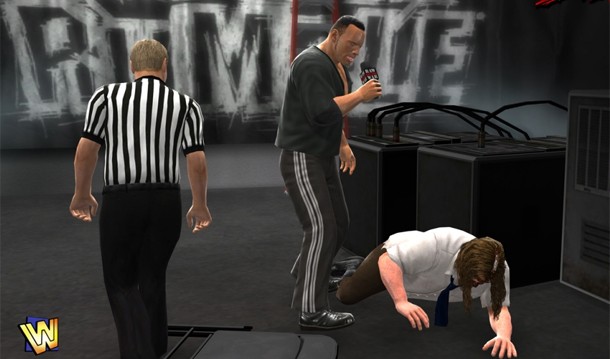 Two years ago, NBA 2K11 released to critical and commercial success. A primary reason for the acclaim was a mode that meticulously recreated key moments of Michael Jordan’s legendary NBA career. With WWE ‘13, THQ has produced a similar love letter to pro wrestling’s greatest era. Millions were entertained by the antics of Stone Cold Steve Austin, The Rock, and D-Generation X in the late ‘90s, and this “attitude era” stands at center stage in this year’s entry.

WWE ‘12 attempted to tell the stories of several wrestlers with its Road to Wrestlemania mode, but an annoying objective system and match structure brought the entire experience down. WWE ‘13’s Attitude Era mode rectifies the mistakes of its predecessor by making specific objectives “historical bonuses” instead of required actions. If you want your matches to play out the way they did in real life, you’re free to throw Mankind off of the Hell in a Cell or hit Kane with three tombstone piledrivers. If you’d rather progress through the campaign in your own fashion, you can move on just the same (albeit without the great bonuses the historical objectives unlock). While you learning about the history of numerous wrestling legends, the mode gradually introduces you to new match types and gameplay mechanics. In every aspect, Attitude Era is the best story mode I’ve ever played in a wrestling game.

THQ didn’t skimp on the era’s superstars, resulting in a dream roster of the wrestling greats covering everything from main eventers like Triple H and The Rock to midcard talent like The Godfather and Billy Gunn. On its own, the Attitude Era mode and roster offer more than other titles with a historical focus like Legends of Wrestlemania and WWE All-Stars. They could have called it a day with their offerings from the late ‘90s, but THQ also offers a full current roster and hugely customizable WWE Universe mode.

Like previous entries, WWE Universe gives you full control over match cards and television schedules, essentially combining a career mode and a general manager mode. Hundreds of scenes can pop up organically before, during, or after matches, and the development team had the help of WWE producer Paul Heyman, one of the best minds in the business, when putting them together. Creating feuds, guiding a created superstar’s career path, and introducing your own TV show is great, and the mode is endless for all intents and purposes.

These big modes are fantastic in the broad sense, but plenty of little details and tweaks improve the experience significantly. If you’re tiring of wrestling Eddie Guerrero for four straight weeks in Universe mode, you can change the “match experience” setting to Quick for a brief beatdown. If you’d rather have a Wrestlemania-caliber classic, you can change it to Epic. It’s a subtle addition, but one I found myself using frequently.

Only longtime wrestling fans will notice some of the tiny details, but they’re sure to appreciate the attention given to things like accurate cage color, Mick Foley’s entrance stride, and appropriate logos and fonts for pay-per-views. Casual wrestling fans may not take notice of THQ’s obvious love and knowledge of wrestling, but longtime viewers like me will be surprised and impressed throughout the game.

Above: Our recent Test Chamber episode covering the game

A detailed tribute to the industry's greatest era is great, but it wouldn't add up to much if the action between the ropes wasn't up to par. Thankfully, WWE '13 allows fans to recreate virtually anything you see on Raw without resorting to an overly complex control scheme. Standard actions like strikes, grapples, and reverses can be pulled off with basic button presses, but more elaborate maneuvers require some setup. With a finisher stored, you can perform your finisher through a table, a superplex to the outside of the ring, or even a mid-air RKO or Sweet Chin Music if your foe makes an ill-timed leap. Multiplayer bouts are a blast, and several submission and iron man matches had me on the edge of my seat.

For everything it does right, WWE ‘13 still has some nagging issues. AI occasionally gets caught in odd loops. Physics for items like ring ropes and weapons are frequently wonky. A nonexistent crowd started a chant during an empty arena match. Many of the wrestlers’ faces look odd or don’t resemble their real-life counterparts. Despite these complaints, very few of them interfere with the experience as a whole.

Wrestling fans may wonder where THQ goes from here with the series, because WWE ‘13 offers a staggering amount of content. Its roster is unmatched, its creation suite is bigger and better than the already massive past offerings, online play is lag-free and matches the options and functionality of the best fighting games, and it offers two fantastic and expansive modes in Attitude Era and WWE Universe.

I’ve always pointed to 2000’s WWF No Mercy as the best wrestling game I’ve ever played, but nostalgia is certainly a factor in that. After playing WWE ‘13, I’m hard pressed to think of a more enjoyable and complete wrestling game in history. 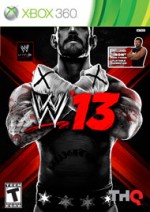 THQ takes us back to the Attitude Era with the most complete and enjoyable wrestling game I've played.