A lot of racing fans look to Codemasters and its Dirt series for their off-road or rally needs, but that's not the only game in town. WRC 3 FIA World Rally Championship focuses solely on rally racing. While this game's attention is not divided and it covers the expected bases, it also falls short of being a definitive experience.

WRC'3 nominal career mode makes you mainly compete in special stage, super special stage, and multistage rally races to move up the ranks, upgrade your car, and unlock more events. None of the races or the overall structure are dramatically different from what you've experienced before, although I did like the Gate Contest events. Here you must break through green blocks on the track (and avoid the red ones) as their color is revealed at the last second.

Despite the uninspired nature of the career format, Italian developer Milestone was wise to change up the racing surfaces you encounter as well as the car you use from race to race (a mix of classic and current rally cars). While this may be disorientating during the first few turns in your new car, it at least highlights their differences and how you must approach driving them (particularly as you upgrade their parts), as well as the precise throttle and brake inputs required in order to put down a good time. That said, the driving experience is not perfect. There are times when the cars feel like they swivel on a pivot, and contact with objects on the side of the road can produce exaggerated accidents.

If you don't feel like marching through the lengthy career mode, you can also jump into an official WRC Championship season or take your talents online. While the latter offers the majority of the race types of the single-player (you can also post your best times when playing by yourself) the matchmaking seems flawed in that it puts players who have played wildly varying amounts of matches together. All in all, online play is perfectly sufficient – a characteristic that describes the rest of the game.

It's commendable that WRC 3 aims to give a full rally experience – complete with the need to repair cars between stages - and not dilute it with other forms of off-road racing. Despite this commitment to the sport and the fact that the game has some fun moments, its middling execution only goes so far. 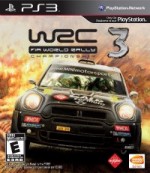 A game for rally purists that doesn't fully execute.

Purchase More Info
7.75
i
Game Informer's Review System
Concept Give fans a WRC championship experience as well as a career mode where you work your way up the ladder
Graphics Pretty good. Not a lot stands out, but then again nothing bad distracts you either, which for a rally game is ultimately a net positive
Sound You can choose the timing of your co-driver's directions, which is a cool feature
Playability Adjusting to the feel of the different contemporary and classic rally cars is part of the challenge, but cars can feel like they are on a pivot
Entertainment WRC 3 offers the customary modes, and the driving is solid, but it lacks that extra gear
Replay Moderately High