Wipeout: In the Zone Anyone who owns a Kinect has almost assuredly encountered issues with recognition and control at some point. Even with optimal lighting conditions and plenty of space, a certain disconnect can be felt between your own body and your onscreen representation. Our conference room at Game Informer is ideal for Kinect -- it offers more than enough space, with several large windows bringing in ample sunlight. My first fifteen minutes with Wipeout: In the Zone had me thinking something most be terribly wrong with our setup. It turns out the game is just that miserable, however.

This video game version of the ABC game show requires you to jump over obstacles almost constantly. Green indicators on the various courses make it clear when you're supposed to jump, but it's not that easy. I'd attempt jumps time and time again, ranging from tiny hops to exaggerated, knee-raising leaps. These registered about 10-20 percent of the time, with the wide variety of my attempts going unrecognized by the game. I'd fall into the water, restart the checkpoint, and immediately fall again.

I thought something surely must be wrong at that point. I've seen similar issues pop up in Kinect Adventures and other games for the peripheral, so maybe I just needed to recalibrate. I opened up the Kinect Guide and made sure the tilt was correct, and tweaked the angle slightly. Still didn't work. I backed out to the dashboard and ran the full calibration, smiley-face card and all. Still didn't work.

It's not just jumping, either. Your avatar will run when you're standing still, stand still when you're clearly running, or get permanently caught on parts of the course and force you to back out to the main menu. You're going to get knocked into the water a lot in this game, and it automatically switches to a slow-mo replay almost every time. This means constant breaks from running in place and jumping to hover your hand over the skip button.

Navigating the courses is a nightmare, but the troubles carry over to the audio as well. Intros from the announcers will often skip like a scratched audio CD, repeating the same 2-second clip over and over. Entire jokes will be repeated back to back to back, which was the case with a quip about cat whiskers that I heard three times in a row.

If Xbox Avatars navigating a wacky obstacle course looks familiar to you, it's because Doritos put out a free game called Crash Course a while back. That game is basically the same concept, but differs in the fact that it utilizes a controller, it's completely free, and it works. Wipeout: In the Zone is a full-priced Kinect game, it can be fully beaten in about 90 minutes, and it's one of the most broken experiences I've played in years. Kinect owners have been clamoring for new games since the peripheral's launch, but I think we'd all prefer developers take a little more time figuring out its tech if it means less games like this abomination. 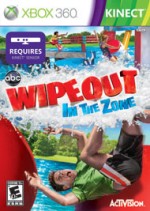 Wipeout: In the Zone

One of the most broken games in recent memory comes to Kinect.