Given that it's the sequel to the game that defined the Wii experience for most people, and  its packed-in with the WiiMotion Plus attachment, Wii Sports Resort could be the best-selling game of 2009. In many ways, this is more than just a game – it's intended to introduce the Wii audience to WiiMotion Plus in the same way the original taught us the basics of motion control.

The proceedings start off with cinematic flair, as your Mii parachutes down to the island from a passing plane. While you are skydiving, the game overlays a Wii remote over your character to show you how Motion Plus allows for fine adjustments of pitch and angle. On the way down you link up with other Miis in formation until your chute deploys, displaying a large Wii Sports Resort logo, taking you into the game. Later you can repeat the skydiving minigames and earn stamps for taking photos of yourself.
At the resort, you and your friends can jump into any of the 12 minigames at will. While there are difficulties, alternate modes, and performance-based stamps to collect (think Xbox 360 Achievements), this game pretty much defines the phrase ''What you see is what you get.''

So what do you get? In addition to the WiiMotion Plus unit, your $50 nets you a collection of games more numerous and of better quality than the original Wii Sports. Some of the contests are designed to show off the greater degree of control the Motion Plus brings to the Wii; the swordplay and archery contests display just how sensitive the add-on makes the remote in detecting fine movements. In particular, archery shines by keeping a focus on actual challenge (something the first lacked almost entirely). Hitting a bullseye on a moving target from a great distance is no easy feat, but the Motion Plus controls convince you that you can do it if you just get the right angle. While it's not as difficult, the swordplay admirably showcases the near one-to-one accuracy when holding a virtual blade.

Other contests don't fare nearly as well. I could not figure out how to get the jet skis in the power cruising minigames to stay on course – even after recalibrating the Motion Plus several times. Other games work, but are simply no fun (cycling and canoeing, I'm looking at you).

The remaining modes fall somewhere between compelling and merely pleasant. Golf is definitely improved, but not nearly as accomplished as the recent Motion Plus enhanced Tiger Woods game. Frisbee and table tennis are solid fun, as is the three-point contest in basketball – too bad the actual two-on-two play is terrible. One surprise was the oddly addictive air sports game, which lets you cruise around the island while holding your remote like a paper plane.

In the end, the best game in Wii Sports Resort is actually the best game in Wii Sports. Bowling was good before, but now features the ability to spin the ball and perform curved rolls. Later levels even force you to perform these techniques by introducing moving barriers in the lane. Add in a fun new 100-pin mode, and bowling once again takes the Wii Sports crown.
All in all, families that loved the first one would be well advised to pick up the sequel. It's a better game, and for the price of admission you get an accessory that will (hopefully) allow for improved gameplay for the future.

7.5
About Game Informer's review system
Concept
Expand the ultra-successful Wii Sports with more games and the new WiiMotion Plus control
Graphics
The same Miis you've come to know and love frolicking on a bright, cartoony island
Sound
The pleasant music borders on generic, but Nintendo always finds a way to charm you with catchy melodies
Playability
Is WiiMotion Plus a giant step forward in terms of accuracy? Yes. Does it solve all the problems associated with Wii control? No
Entertainment
It's a much better package than the original, but hardcore gamers will find greater value in buying the Tiger Woods or Virtua Tennis pack-ins
Replay
Moderately High 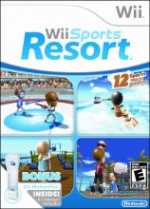