Finally, Nintendo has seen fit to deliver us from the horrors of Guitar Hero and Rock Band's intuitive gameplay, accurate mechanics, and great song selections. Thank God. Now I can stop pretending that I was having fun rocking out to Metallica and live my dream of playing backup cowbell in a cruise ship band version of ''Yankee Doodle.''

Yes, folks, Wii Music is here. Here are the basics (and believe me, it's all basics): You select a song and one of dozens of instruments. Then, you and up to three friends can waggle your remotes and press buttons in time, and begin creating what can only be described as a god-awful racket. The notes are automatically generated, but do change in pitch along to the prescribed melody (and slightly altered by holding down buttons at random). In addition...well, no that's pretty much it, actually. You can save these performances for posterity, but haven't we suffered enough already?

My problems with the game's design aside, it's necessary to point out that Wii Music just doesn't work very well. Wind instruments are the most responsive because they only involve pressing the 1 and 2 buttons. Any stringed or percussion instruments involve swinging the remote, which doesn't sense well enough to allow you to follow the note patterns with any accuracy. With each person adding another layer of inconsistent timekeeping, the songs devolve into what sounds like a particularly spastic rehearsal of an elementary school band. While it's somewhat amusing to hear what ''The Entertainer'' would sound like with a sitar, it's not enough to make this anywhere near compelling. A few of the minigames are more useful, particularly the pitch trainer and the bell choir (which uses [gasp!] actual note tablature). These aside, Wii Music is nothing more than the digital equivalent of buying your child a toy drum set to freak out on, and possibly as annoying.

More importantly, Wii Music is a poor solution to an imaginary problem. Rock Band and Guitar Hero have gotten more non-gamers and casual gamers into the hobby than any titles I can think of in the last 20 years. And guess what? They like actual gameplay, just like ­us.

3
About Game Informer's review system
Concept
Make a music game, but dispense with all that ''skill'' and actual gameplay nonsense
Graphics
Utilizes Miis in simple environment. Fans of Wii Sports will be right at home
Sound
Random public domain folk and classical songs, Muzak versions of lightweight pop tunes, and some Nintendo theme songs. All being strangled within an inch of their lives
Playability
On a standard television, the control is imprecise. On our two different models of HDTVs, lag renders it nearly unplayable (and it does not let you calibrate)
Entertainment
Recommending this title would require me to radically change my definitions of the words ''music,'' ''game,'' and ''fun''
Replay
Low 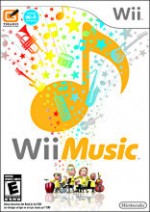