When you're hired muscle, or in Vin Diesel's case a hired lead foot, you never know what you're going to be asked to do. If you told me before playing Wheelman that I'd be tearing through the floors of office buildings at high speeds, taking on all ­challengers in a big rig, and terrorizing everyone in Barcelona, I'd say: ''Sign me the hell up!'' Whether on foot or behind the wheel, this game plays like a summer blockbuster the whole way through.

Vin Diesel takes the role of Milo Burik, a fixer for three Barcelona gangs. Most of your time is spent running around doing story and side missions, but the game does a good job of elevating you above feeling like just an errand boy. The way it paces the action and its variety of assignments always keep you interested. One of my favorites was when I had to speed down a subway tunnel (complete with oncoming train) chasing a runaway train as I fought off goons on motorbikes and baddies hanging out of the subway cars. Each carriage had to be separated from the main line by shooting the cars' hitches before I could take on the main bad guy at the front of the train.

Wheelman has enough explosive thrills that you'll be yelling and laughing the whole time. Enemy cars don't just crash, they're vaulted up in the air as masses of smoke and fire, scattering their occupants on the street. You don't just get air when you drive up some plaza steps, you are launched into the sky – complete with a cinematic camera angle – much to the terror of your ­suspension.

None of the game's thrills would be possible without its special moves, such as hijacking cars with an action called the airjack. With a timed button press Vin leaps from his car, landing on the roof of the car ahead of him and then commandeering it by kicking out the driver in one motion. In later missions, my car was getting hammered so frequently and severely by foes that I was switching cars every 10 seconds. Melee car attacks (via the right analog stick) allow you to swerve and take out vehicles, and you can also lean out of your driver's window and shoot enemies in either real time or slow-motion.

Wheelman is a well-built game, but it's not without a few hiccups. The out-of-vehicle gunplay – while nicely breaking up the driving segments – is an awkward, merely adequate combination of over-the-shoulder, auto, and free targeting. Furthermore, the side missions (see sidebar) are a great addition, but they are ultimately unnecessary since their rewards aren't required to complete the story. Wheelman misses an opportunity to be more of a complete experience by not offering more of a symbiotic relationship between the story and the side missions.

Vin Diesel may just be a lowly wheelman on the crime syndicate ladder, but he delivers an action experience that is larger than life. 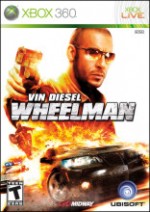 Wheelman
Purchase More Info
8.5
i
Game Informer's Review System
Concept A seamless blend of tried-and-true racing objectives and summer blockbuster action movie fireworks
Graphics Vin Diesel's model is well done and the intensity of the crashes jumps off your screen
Sound Vin is appropriately deep in timbre, and I'm glad that the other actors' accents seem to at least be genuine
Playability The out-of-car gunplay is a hodgepodge that is adequate at best
Entertainment Unlike most racing or action games, Wheelman keeps your hands glued to the wheel the entire ride
Replay Moderately High