Wet wears its inspirations on its sleeve. Quentin Tarantino’s B-movie tributes Kill Bill and Grindhouse both figure heavily into Wet’s visual aesthetic – right down to the scratchy film filter that turns your 1080p into a slightly malfunctioning projector (an effect which I had to turn off after about five minutes because it was making me ill). From games, it swipes Max Payne’s slow-motion diving, God of War’s cinematic quick time events, Prince of Persia’s platforming, and The Club’s gonzo, multiplier-heavy ­arcade ­shooting.

As befitting its gameplay and presentation, Wet’s plot is a mishmash of hyperactive action clichés. You’ve got a hot, *** hero named Rubi, whose sense of style favors leather and dual pistols. From the explosive opening, you guide her through a series of ever more ludicrous plot points involving plane crashes, a variety of evil foreigners, a mysterious suitcase, someone named “Rat Boy,” and – by my count – two separate characters that “control the designer drug trade in Hong Kong.” It also features some notable voice talent in Eliza Dushku and Malcolm McDowell, which you’ll appreciate when they deliver lines like “Say ­goodbye, ­f---tard.”

But you know what? The whole mess sort of works for me. It’s boneheaded to its spandex-clad little soul, but like a good late night cable flick, the creators seem to be in on the joke. I love how there’s no attempt to provide any sense of reality. The developers don’t even bother with a reload function on your main pistols and there’s no cool-down timer on your bullet time abilities, translating into battles that are somewhere between Jet Li and a gymnastics meet on amphetamines. It’s not polished enough to hang with the games that inspired it – the action gets messy to the point of frustration far too often, and the level designs are rudimentary to say the least – but if you’re looking for a weekend sugar-rush you could do much ­worse.

7.5
About Game Informer's review system
Concept
A badass chick travels the world killing dudes in a variety of acrobatic ways. Double crosses and carnage ensue
Graphics
The animations and character models are great, especially in the scripted quick time event sequences. Still, for a game that aims for balletic grace, the animations are clunky
Sound
For once, a game that picks a musical aesthetic and sticks with it: Wet’s soundtrack is filled with Cramps-inspired psychobilly artists like Corpse Show Creeps. Actors Eliza Dushku and Malcolm Mcdowell lend their voices to the project
Playability
There’s not a new idea in this game, but it does the basics of bullet time pretty well
Entertainment
There’s something about a game that knows how silly it is. Like the B-movies that inspired it, Wet is rough around the edges but has a sense of sleazy fun
Replay
Moderately Low 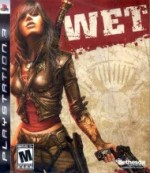