Way Of The Passive Fist My biggest problem with side-scrolling brawlers has always been their mindlessness. Even when a few upgrade trees or RPG systems are thrown in to make them more intricate, I can’t escape the feeling I’m just mashing the punch button until everyone’s dead. Way of the Passive Fist addresses this issue with more mindful combat that wants you to pay close attention in every fight. But while its combat is novel and fun at first, it doesn’t lift the experience above some glaring issues.

Rather than punching your way through legions of street thugs, Way of the Passive Fist has you hanging back and watching the movements of the many bandits, robots, and monsters you face as you make your way through a thin, post-apocalyptic plot that serves more as context than a real pull. Your main weapon against your enemies are well-timed parries and dodges, which drain your foes’ stamina until they keel over from exhaustion.

Every enemy has their own multi-hit attack strings to memorize, giving combat a rhythmic feel.  Once I had learned most of the enemy patterns, I was parrying punches, dodging throws, and returning throwing knives to their senders in a matter of seconds, which made me feel like the center of a well-choreographed action movie fight scene. As you parry attacks you build up a combo meter, giving you access to powered-up moves like charged-up punches and grabs. Saving up these attacks for clusters of enemies or hulking brutes adds a fun strategic layer to all the parrying.

Unfortunately, combat grows stale over time. Though later levels introduce a few new enemy types, they’re mostly palette-swapped foes with faster, more difficult attack patterns, which don’t do much to stave off how repetitious combat can be. Although it can make for some cool maneuvers, the rhythm-based combat isn’t as satisfying as you’d expect; instead of feeling like I’d accomplished some feat of dexterity or skill, I was rewarded simply for paying attention and playing long enough to memorize each enemy’s pattern.

Moving around during combat is also a bit of a chore, which causes a few issues. It isn’t a constant concern since you and your opponents are usually standing still as you defend against their attacks, but a few levels emphasize deft movements. The side-scrolling view isn’t great at relaying whether you can hit an opponent, making for some frustrating situations in which my charged-up punch missed because I wasn’t at the right height (which is especially aggravating during boss fights). Positioning causes problems during levels that have you dodging lasers or bombs; if you’re in the middle of parrying a string of attacks when you see your cue to dodge, you’re probably going to get hit. I also had times when enemies’ attacks would overlap with each other, asking me to parry attacks from two sides at once, which is impossible.

One way to mitigate these problems is with difficulty sliders, which let you tailor various gameplay aspects to your liking. After finishing the story mode, I wanted to test my parry reactions but didn’t want to deal with health management, so I made it much harder to land parries, but made it health pickups more abundant. This is a smart way to let players learn and experiment, and I like that no content is gated based on difficulty.

A few arcade modes encourage you to replay levels to get high scores and bragging rights, but I felt as if I’d seen everything interesting on my first time through. Enemy encounters don’t drastically change between playthroughs, either, and the lack of multiplayer means it lacks the party-friendliness that can liven up subsequent runs.

The rhythm-based combat and malleable difficulty set Way of the Passive Fist apart from most brawlers in an interesting way. But while it starts strong, the combat doesn’t carry it over a host of issues. Without other ways to keep players busy it isn’t worth going back to after the first unsatisfying playthrough. Way of the Passive Fist offers an interesting alternative to the mash-happy games of the genre’s past, but after the novelty wears off, it fails to connect. 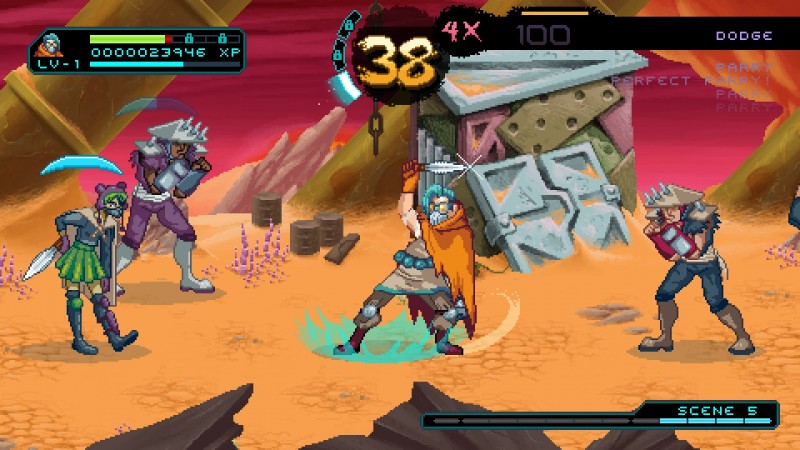 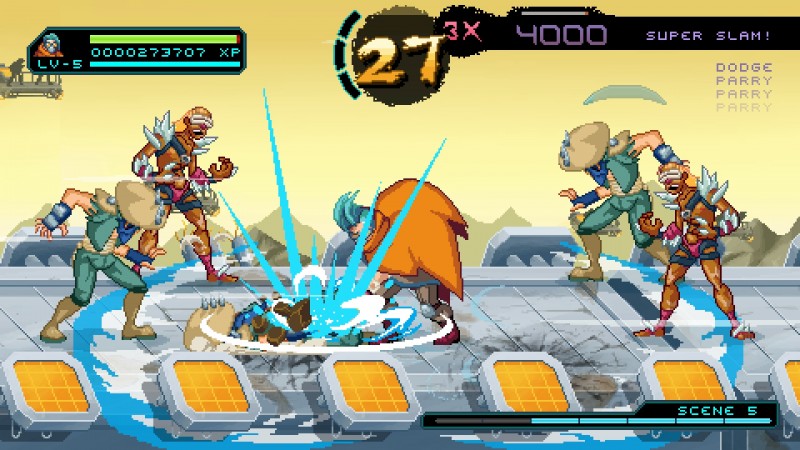 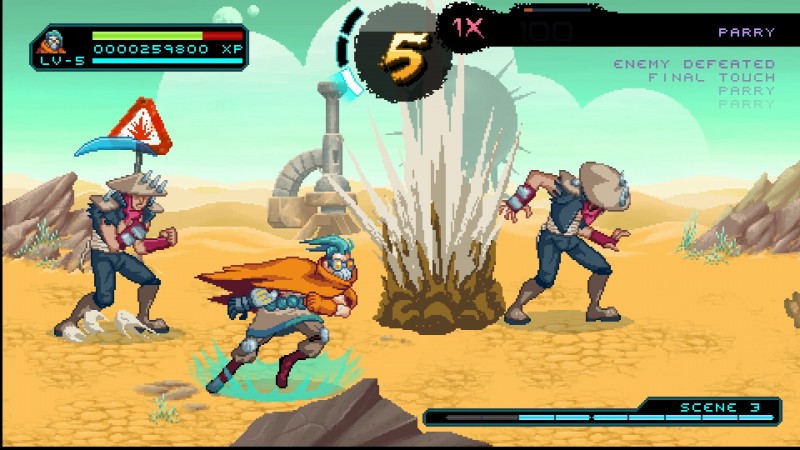 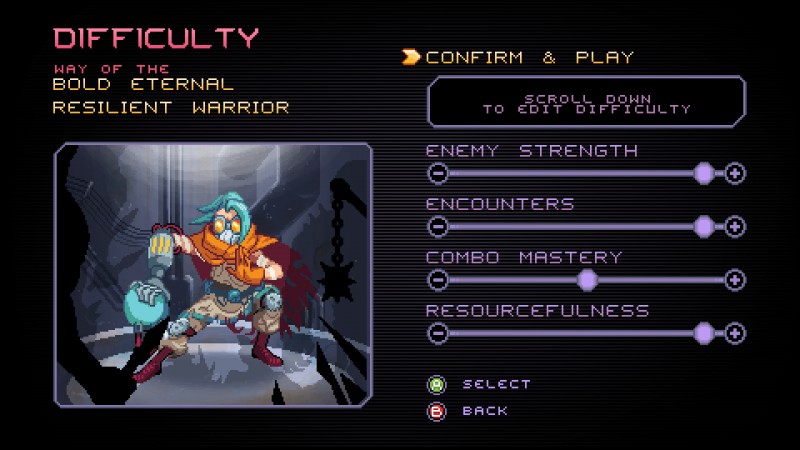 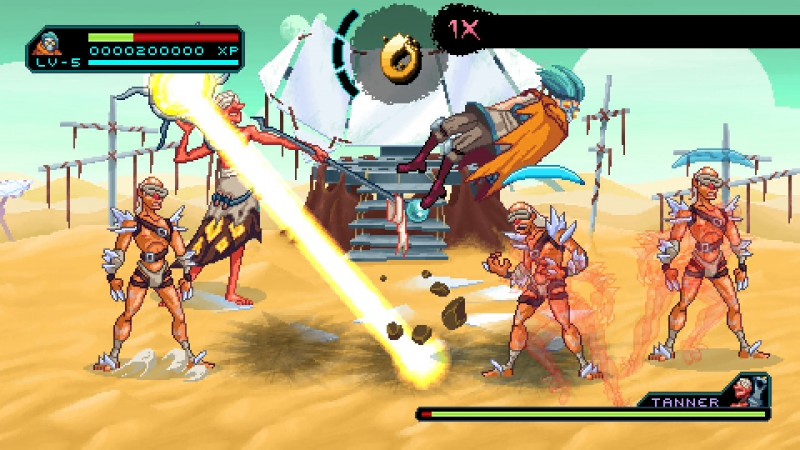 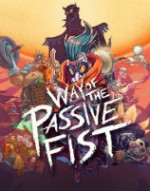 Way Of The Passive Fist

Way of the Passive Fist is built on an intriguing premise, but lacks the fundamentals to capitalize on it.

Purchase More Info
6.5
i
Game Informer's Review System
Concept Rework the 2D brawler by emphasizing reactions and timing over button-mashing
Graphics Your large, pixelated adversaries are imposing, but environments lack visual variety. The limited animations help with timing, but give the game a budget feel
Sound The guitar and synth in the background definitely evoke the 80s feel it’s going for, but don’t expect these tracks to make their way into your regular playlist
Playability Basing combat on timing instead of mashing works, training you to read each enemy’s patterns and counter them. The whole thing breaks down whenever you have to dodge or move quickly, though
Entertainment The intriguing gameplay and myriad difficulty options are enough to make Way of the Passive Fist an intriguing curio, but it falls into the some of the traps it tries to escape
Replay Moderately low