Among the many arcade ports and re-releases on Xbox Live Arcade, the service has also played host to numerous innovative titles like Braid, Limbo, and Splosion Man. At first glance, Warp appears to possess similar qualities as those hits. It features unique gameplay mechanics and a distinct art style, but the experience becomes tiresome after the first couple of hours.

You play as Zero, a cute alien creature that awakens on a lab table to find himself being experimented on by humans. The sterile laboratory environments and the “escape the facility” endgame both call to mind Valve’s popular puzzle game Portal. All you have to work with initially is Zero’s short-range warp ability, but it’s enough to teleport through doors and other obstacles.

Many sections of the game are puzzle-based, but most don’t require a lot of brainpower. Typical puzzles include blowing up power nodes to open new paths, warping through walls while avoiding power-draining water, and taking down a few bosses with newly acquired abilities.

Stealth also plays a role in escaping the facility. Guards with simple A.I. patterns are on patrol throughout the facility, and you can warp inside barrels to stay out of their line of sight. Silently moving onto the next room is an option, but you can also take the violent route by warping inside the guards and bursting through them in a shower of blood. Having options is always nice, but the A.I. is too simple to make stealth rewarding.

Zero earns other abilities as he progresses, which help to shake up the gameplay. You can spawn a controllable hologram of Zero, swap places with objects, and eventually launch barrels at enemies, land mines, or other hazards. While these powers add variety, they aren’t very entertaining or interesting.

Warp is charming at first, but the simple A.I. and basic puzzles aren’t enough to make it an XBLA standout. Completionists may find replay value in the collectible grubs, basic upgrade system, and challenge rooms, but anyone looking for deeper stealth or puzzle-based gameplay should look elsewhere. 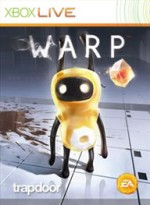 Trapdoor's XBLA title features unique gameplay mechanics and a distinct art style, but the
experience becomes tiresome after the first couple of hours.

Purchase More Info
6.75
i
Game Informer's Review System
Concept Teleport around a facility as a cute orange blob
Graphics Zero is cute, and the lab environments remind me of Portal
Sound Extraterrestrial mumblings and screaming scientists make up most of the soundtrack
Playability Zero controls fine, and the simple enemies aren’t much trouble to get around
Entertainment Warp is promising at first, but it becomes more tedious as it progresses
Replay Moderately Low