“They shall be my finest warriors, these men who give themselves to me. Like clay I shall mold them and in the furnace of war I shall forge them. They will be of iron will and steely muscle. In great armor shall I clad them and with the mightiest gun shall they be armed. They are my bulwarks against the terror. They are the defenders of humanity. They are my space marines and they shall know no fear.”

This is the benediction bestowed by the Emperor of Mankind to his ultramarines, genetically enhanced soldiers with god-like abilities. The Emperor’s message hangs from a purity seal fastened to the shoulder of Space Marine’s protagonist Captain Titus, the veteran called upon to defend Imperium Forge World Graia from an ork invasion.

Within the first few minutes of play, Titus shows us that the ork regime will likely need a bigger army. Space Marine isn’t as much a tale of Titus saving a world as it is a story of ork genocide. Orks explode like zits, with their heads rolling off their bodies, and at the end of the day Titus stands tall above their corpses as one of video games’ most accomplished killers. His bloodlust is the driving force behind this well crafted killing simulator.

Developer Relic Entertainment, which has crafted several great Warhammer 40,000 games, does a fantastic job of painting the ultramarines as war-changing entities, much like Star Wars’ Jedi or The Lord of the Rings’ wizards. Although Titus is outfitted in hulking armor, he moves swiftly and quickly switches between melee and firearms. He controls remarkably well for a tank-like character, allowing for speed and precision in any combat scenario. His melee move set is rather small, but the timely delivery of new close-range weapons during the eight-hour campaign ensures that repetition isn’t a problem.

The gameplay becomes even more dynamic as Titus’ firearms options grow; plasma pistols, sniper rifles, and powerful chain guns open up new approaches to taking down enemy formations. While the “kill the orks to save the planet” directive guides most of the plot, Relic’s scribes throw in a nice twist in the latter half that shakes up the battlefield and gameplay. The only thing that doesn’t change is Titus’ rage. That man loves to kill.

Relic injects variety into battles through different enemy types. Some fall with one shot, but others can eat up entire clips as they continue their approach. Sometimes one ork group will position themselves on the perimeter as another platoon rushes Titus. Situations like this call for a well-placed grenade toss to slow the advance and quick bolt or sniper shots to clear the perimeter. Leftover orks are often funneled directly into Titus’ path, and his chainsword’s razor-sharp teeth show them no mercy. One swing often nets three to five kills, and an ork who foolishly rushes him without backup usually suffers a graphic execution that invigorates Titus and, hilariously, replenishes his health. The combat takes center stage, but the world has no life or personality. Each stage follows a linear path, and one stage reminded me of Halo’s much-maligned library level, forcing Titus into a repetitious loop of opening green doors and riding elevators.

Though I view the single-player campaign as the flagship experience, others may side with the multiplayer. Titus’ combat prowess is fully integrated into this experience. Great satisfaction comes from striking down foes with a flurry of axe strikes or unloading heavy bolter fire. Lag is an issue, but if you find a decent host, the matches can be a blast and a great test of skill.

Rather than continuing the fight of the ultramarines versus the easily slaughtered orks, multiplayer pits evenly matched space marines against chaos marines in team deathmatch and a conquest-like mode. Both marine types offer three classes: assault/raptor, which favor close-quarters melee and are equipped with jump packs; devastator/havoc, which are essentially heavy weapon experts; and tactical/chaos, a balanced close and ranged combat class. In the matches I played, all of the classes seemed nicely balanced.

While many of my matches were against higher leveled players (a sign that not many people are playing), the copy loadout feature gave me the tools I needed to compete since it gives the player the weapon and perks of the player that killed them. I don’t necessarily like getting my hands on high-end gear without putting in the time to unlock it, but in instances when no one is playing except the most hardcore, it gives you a fighting chance. Reaching the highest rank (41) and unlocking all of the customizable armor parts and perks demands a huge time investment.

The biggest multiplayer fault is the small number of maps available. This could change with a DLC map pack, but for now expect to play the same few environments over and over.

If you’re new to Warhammer, don’t go into this game expecting insight into the expansive universe. The focus is mainly on the mission at hand. While a few cameos are thrown in as nods to longtime fans, little is provided in terms of character backstory, the importance of this battle, or even why mankind hates the orks. I've been a fan of Warhammer 40,000 since I started playing the tabletop miniature game in the early ‘90s. Relic's Dawn of the War series remains the best video game adaptation of this universe, but Space Marine is a close second. The combat – for both single and multiplayer – pumps out barbaric excitement and continues to improve as the adventure unfolds. 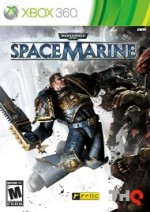 Relic continues its hot streak with the Warhammer 40,000 license.

8
i
Game Informer's Review System
Concept A new look at the Warhammer 40,000 universe that shows off the impressive combat prowess of the ultramarines
Graphics Environments lack points of interest, but the animations are gorgeous, especially on the ork deaths
Sound The voice cast is outstanding and the tribal soundtrack channels the Battlestar Galactica score with its pounding percussion instruments
Playability This game gets better the more you play it. Combat offers a nice mix of melee and long-range gunplay, and the encounters offer a decent challenge
Entertainment Great gameplay leads to high kill counts, cringe-worthy deaths, and high-pitched excitement that escalates as the game unfolds
Replay Moderately High