After being announced way back at E3 2013, the PC version of Behaviour Interactive's MMO third-person shooter, Warhammer 40K: Eternal Crusade, finally has a release date. The bad news? Behaviour has also announced that the PlayStation 4 and Xbox One versions are currently on hold.

PC players can take up arms on September 23. The launch version of the game reportedly includes four player factions (Eldar, Space Marines, Chaos Space Marines, and Orks), 20 sub-factions, and hundreds of weapons, and will be supported with "free lifetime expansions."

In the press release, Behaviour Interactive's Stephen Mulrooney says the decision to delay the console versions "...will result in an optimized and extended experience when released." No further release window was given for the console versions, but today's release date announcement was accompanied by a spiffy new trailer, which you can watch below.

For more on Warhammer 40K: Eternal Crusade, check out our early hands-on impressions from PAX 2014. 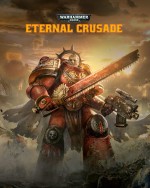