War of the Vikings In the world of competitive online games, shooters are one of the most popular options, but not the only one. Paradox Interactive’s War of the Vikings is an interesting twist on the formula: A close-quarters objective-based action title that feels like one of these experiences, but with battleaxes instead guns. You take on the role of Vikings or Saxons in a war for control of Britannia. Players customize loadouts, engage in short matches, earn experience and currency for unlocks, and enjoy a different take on a now-classic format. While the title is initially enticing, it gets repetitive and mundane after extended play.

Objectives vary depending on the map and mode, but everything essentially boils down to killing the opposition. The swing of a sword or the deathblow of an axe require a considerable amount of skill and timing. In fact, you might go several matches without even landing a killing blow as you try to get the timing down for blocks, parries, and strikes. Players also have access to a special ability that dishes out a lethal (or near-lethal blow), but often leaves them vulnerable to opposing attacks.

Once you have the timing down, the combat is quite satisfying. It has a lot more to it than simply spamming the left mouse button. Perfecting a counterblow after blocking an incoming assault is a rush, and mastering the many techniques are rewarding. The experience gives you something you can’t find in competitive first-person shooters; landing massive axe strikes on other players and watching them crumple under the weight feels a good deal more epic than taking down an opponent from afar with an assault rifle. However, with precise timing required for success, latency and hit detection issues are critical; during my play sessions on a range of servers I experienced lag issues that made things frustrating.

While the emphasis is definitely on the brutal melee combat, ranged options can turn the tide of combat. Throwing axes and bows add another layer of combat on top of the close-quarters strafing extravaganza, and provide substantial opportunities to land attacks on charging or otherwise vulnerable Vikings.

Instead of simply charging forth with a two-handed axe raised for deathblows (while fun, it’s not typically a winning strategy), players need to pay attention to the team-based combat and take action accordingly. Teammates moving in with shields raised may open up a window of opportunity for a devastating strike. Lone wolves can turn the tide of combat as well, but that strategy is most effective by flanking opposing formations or looking for windows when forces are locked in combat with multiple combatants.

Players can engage in combat on a number of different maps with varying objectives, ranging from traditional deathmatch to point capture. While the maps offer some nice environmental changes – from icy landscapes to once-tranquil villages – they’re basic and feature more or less the same gameplay. Modes include traditional team deathmatch, conquest, and arena, a hardcore mode that puts players directly into the fight with little or no travel to the battle from spawn. Unfortunately, for all of its maps and modes, the gameplay experience is largely interchangeable. One could easily be playing a deathmatch on ice and transition to conquest in the forest with little or no change to the gameplay. War of the Vikings supports up to 64 players in a single game, but most servers at the time of this writing were focused on 12v12 maximum play.

After starting as the well-rounded warrior class, players unlock the offensive-tilted champion and specialist skirmisher. Upon reaching level four, they can then begin to customize weapon and perk loadouts to create their own classes. A wealth of items unlock when you level up and acquire in-game currency, from weapons, armor, and perks to cosmetics like beards and banners. Given the simplistic tools of war from this era, the progression isn’t as deep as you would find in a shooter where you can tweak slights, barrels, etc.

Battles in War of the Vikings can be quick and enjoyable, but those flashes of fun aren’t enough to keep the experience interesting. Despite different modes and maps, everything blends together into one giant Viking soup, with little differentiation. You just repeat the same drill over and over again, with little sense of progression or accomplishment. That repetition is probably the largest factor holding War of the Vikings back. The action is fun and fast-paced (when the latency issues aren’t letting you down), but things get stale too quickly. 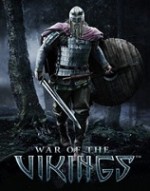 War of the Vikings

In the world of competitive online games, shooters are one of the most popular options, but Paradox Interactive’s War of the Vikings is an interesting twist on the formula.

Purchase More Info
6.5
i
Game Informer's Review System
Concept Participate in brutal melee combat in a multiplayer action environment just like in its predecessor, War of the Roses
Graphics Visuals are appropriate for the setting, with colors and other visuals to help identify friends and foes
Sound Grunts, roars, and all the accoutrements of grisly close-range combat
Playability A first-timer can luck out and score a killing blow by waiting for the opportune moment, but learning the timing can take a while, and skill plays a large factor
Entertainment Smashing up against enemy shields and hurling axes into the opposition is enjoyable for a spell, but that’s all there is to do.
Replay Moderate